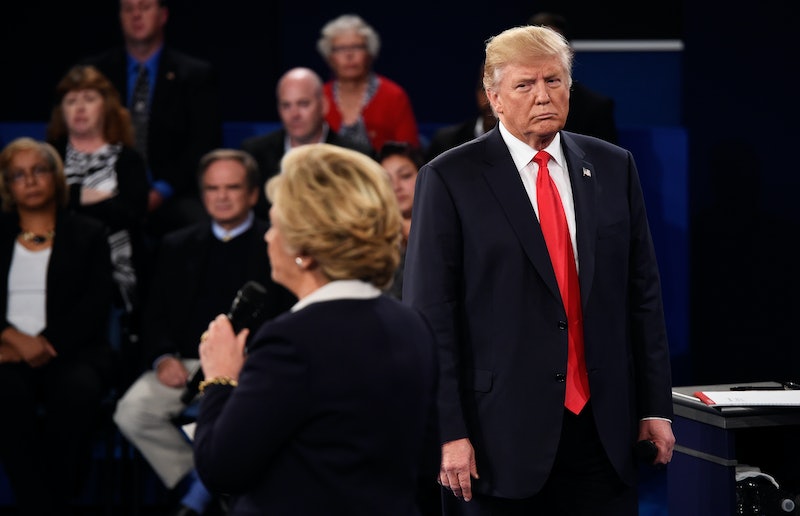 You're onstage with the eyes of an outraged nation upon you during the second presidential debate. Are you thinking about your plan of attack? Your policy on education? Your tiny, sweaty palms? No. You're too busy wondering how to talk to a woman who is debating you at this very moment. Sure, she might look like she's occupied with tearing your character to shreds in front of an audience of millions, and she's technically your political opponent. But if women don't live in a perpetual state of anticipation, ready and waiting for you to grace them with your attention, why do they even exist? Deep down, even the ones wearing headphones in public or running for President want you to come talk to them.

On Sunday night's presidential debate, the reigning king of gender relations, Donald Trump, gave a crash course in how to interact with the woman behind the podium. Of course, some may say his approach is unorthodox, but his resume is impressive. This is the man who has a long history of sweet-talking the ladies — you know, endlessly criticizing their appearance, paying them such flattering compliments as "Miss Piggy" and "Miss Housekeeping," and the like — and he excels at the kind of "locker-room talk" that makes men want to be him and women want to be with him. Besides, anyone that spends that much time insisting he respects women is clearly a next-level feminist.

So next time you find yourself trapped in a debate with someone of the lady-type persuasion, let Mr. Trump be an example. Here's how to comport yourself, as illustrated by the second presidential debate. For further study, tune into the final presidential debate on Oct. 19.

The second your opponent's back is turned, move into a position approximately two to three feet behind her. Shadow her every move. Put on your best looming face. Women think it's flattering when you crowd into their bubble of personal space, especially if you do it when they're not looking.

Side note: This move is also perfect for the club.

Never Let Her Finish A Thought

Did you forget to prepare for the debate, or perhaps outright refuse to do so? That's OK; you don't need to prepare to talk to a woman who is debating! One simple tactic is all you need to ensure success: Interruption. Never let her finish a thought, let alone a sentence. If you run out of words, waving your arms wildly and squawking should suffice. Whether you interrupt her 18 times or 51 times, this technique is always a surefire hit with the ladies.

If your opponent is married, her husband is fair game. (Being married to a woman doesn't count, unless they're hot.) Go on the attack, and remember that there's no such thing as too personal. She may not be responsible for her husband's actions, but that's what makes this plan so brilliant: She can't defend herself because there's actually nothing for her to defend herself against.

Moderators are going to ask difficult questions, but don't feel obligated to stay on topic. When you're not interrupting your opponent, your vocabulary should consist of "What?" and "I didn't say that." You may want to prepare a doctor's note in advance excusing you from answering anything of substance. And don't forget that classic avoidance technique beloved by Twitter trolls everywhere: Derailment!

Talk About Other Women

Before anyone starts questioning your respect for women, bring the topic up yourself. Talk about how much you love women, and how much they love you. There's no need to get into specifics, because everyone knows women share the same brain. It's something about pheromones, I think.

Wear Your Heart On Your Sleeve

This technique can be combined with Technique Number One: Invade Her Personal Space for maximum efficacy. Start practicing facial expressions in the mirror. Ideally, by the time you two face off, you'll have a glower so powerful it extends in a cloud of hatred several feet beyond your body. If you do it right, you can harness this aura when you're looming, so she feels a creeping sense of unease each time her back is turned onstage, and possibly for the rest of her life. Women love that.

Be sure to use the harshest possible terms to refer to women, especially your opponent. Let them know that whether they measure up to a set of arbitrary beauty standards is directly related to their worth as humans — descriptions like "disgusting" and "piggy" come to mind. If you're feeling uncreative, just leave it at "unattractive"; that should still get the job done. This will bring their self-esteem so low that the woman behind the podium will find herself desperate for your approval. She'll probably concede if you promise to call her pretty.

Following these simple steps will undoubtedly lead you to success when it comes to talking to a woman who is debating. Good luck out there — and don't forget to check if your mic is hot!

Editor's note: This piece is satire. Donald Trump is obviously not the reigning king of gender relations.