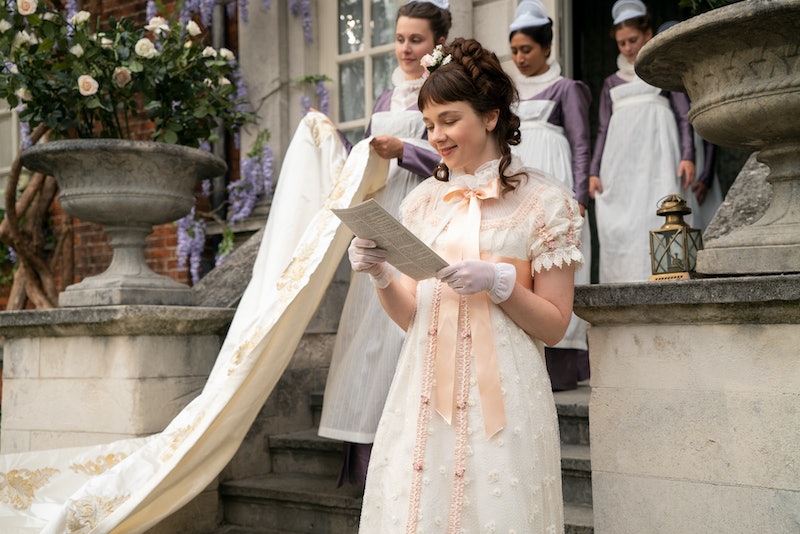 Bridgerton Season 1 spoilers ahead. The first season of Netflix’s Bridgerton became a hit right out of the streaming gate. Adapted from Julia Quinn’s Regency-era books, the Shonda Rhimes-produced series was dubbed Netflix’s biggest show in January (82 million households watched in just 28 days!). It also made household names out of the cast, one of them being Irish actor Nicola Coughlan. Coughlan’s character Penelope Featherington was introduced to Bridgerton viewers as a bit of a wallflower, but she was eventually revealed as the show’s mystifying tatler, Lady Whistledown. While it may have been a shock to many spectators, Featherington’s secret identity as Lady Whistledown was clear as day, as evidence by these Season 1 hints.

Featherington’s feather, not in her cap but her hair, proved to be just one of several Easter eggs right in front of loyal Bridgerton viewers. In fact, Coughlan revealed to fans in March that a “massive, massive feather” prop she chose for her character to wear was a clue to her other life as Lady Whistledown.

The show’s costume designer Ellen Mirojnick also explained the symbolism of Featherington’s accessories and clothing color palettes to Bustle in March. Her “bold” choices were a nod to her “audacious” personality, as her “floral accessories and feathered hair accessory” were the perfect matches for the Regency period piece’s very own gossip girl.

Others picked up on Featherington’s fashion clues throughout Season 1, especially her yellow dress. Per Screen Rant, yellow was both popular and one of the “most fashionable” colors during the Regency era. The website went on to explain that “the color choice actually indicates that she is much more in touch with high society than people give her credit for.”

Although Featherington was heard and seen bemoaning her yellow frocks in Bridgerton’s first season, there still seems to be an underlying meaning behind the character’s colorful looks, according to fine jeweler Sheryl Jones. As Jones stated to W, “Yellow is the color of knowledge and truth, which I think is very interesting, especially when it comes to Penelope.” She also pointed out that Featherington’s best friend, Eloise Bridgerton, is seen wearing yellow flowers, but her “power yellow hue is more subdued.”

Bridgerton fans also chimed in with what they considered hints at Lady Whistledown’s identity. YouTubers, such as Jane Austen Letters By Post, shared their theories, with the revelation of Marina Thompson’s pregnancy being a striking one. They said, “Penelope was one of the small number of people that knew about Marina’s condition. Though, it wasn’t exactly a carefully kept secret and was talked about in the household quite openly. And it could be argued that servants could have overheard this gossip and spread it wider.” Letters By Post goes on to remind viewers that Featherington’s love for Colin and drive to discourage Marina from “luring Colin into a marriage with the intention of covering up her illegitimate pregnancy” makes for some hard evidence.

The Washington Post also mentions Featherington’s knowledge of her distant cousin’s pregnancy being a major tip-off, calling it “perhaps the biggest giveaway.” The newspaper reports:

“Only a few people know that Marina is with child, and we can assume the anti-reading Lady Featherington isn’t the one churning out the gossip sheets. Penelope, on the other hand, has earned her cousin’s trust, and thus, knowledge of her scandal. Pen also has reason to expose it, as Marina attempts to beguile Eloise’s brother, Colin, into marrying her — without disclosing the pregnancy.”

Along with Featherington’s yellow gowns, feather hair accessories, and knowledge of Thompson’s secret comes a few other matter-of-fact signs. Via Twitter, a viewer wrote in February, “Bridgerton things: Of course Penelope Featherington is the real Lady Whistledown. Her nickname is Pen because she’s the secret writer. Also, quills have feathers #bridgerton.” Points were made.

Another Twitter user hunkered down on the Penelope, Marina, Colin love triangle, declaring, “Lmao! I was just like ok...wallflower Featherington with self esteem issues who is privy to all kinds of information....and then when Lady Whistledown dropped the Maria news the timing was just a lil too perfect considering Penelope is in love with Colin!!!”

Reddit users also did not hold back with their viewpoints. Some had a list of reasons as to how Lady Whistledown’s likeness was right in front of onlookers: “Pen is shown to always be in the background,” wrote one, adding that the dawn of Lady Whistledown’s gossip column didn’t start until the year of Featherington’s debut. The same fan also smartly wrote that Lady Whistledown didn’t write about the Queen’s luncheon “because all the Featheringtons were kicked out as soon as they arrived.”

A Reddit post dedicated to BuzzFeed’s article about Lady Whistledown clues was also listed and noted both Lady Whistledown and Featherington’s reference to poet Lord Byron, which they considered as a clear indicator of their connection.

Bridgerton Season 2 is in the works, which leaves viewers wondering what may become of both Lady Whistledown and Featherington. With explosive revelations in the series’ plot and off the Bridgerton set (Simon, Duke of Hastings will forever be missed), show enthusiasts are in for more surprises.

More like this
Nicola Coughlan Shared A Lady Whistledown Excerpt From ‘Bridgerton’ Season 3
By Grace Wehniainen, Alyssa Lapid and Sam Ramsden
Netflix Reveals First Look At Wednesday In The 'Addams Family' Spinoff Series
By Bustle Editors
Alicent's Green Dress In 'House Of The Dragon' May Be An Act Of War
By Kadin Burnett
A New 'And Just Like That' Table Read Pic Confirms A Key Character's Return
By Jack Irvin and Grace Wehniainen
Get Even More From Bustle — Sign Up For The Newsletter