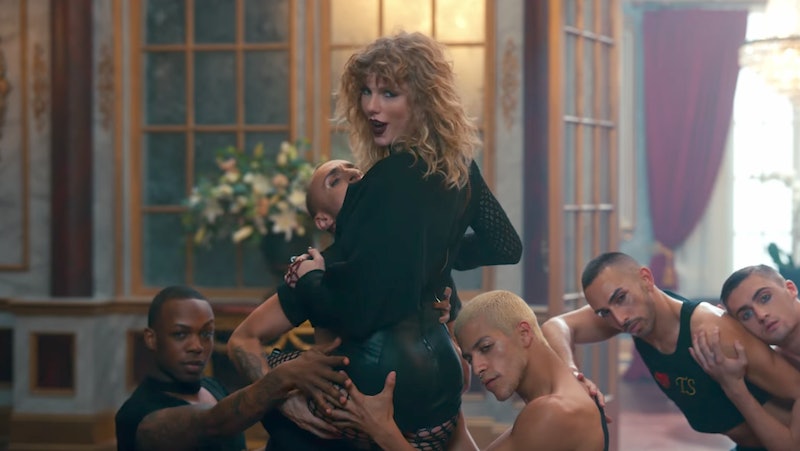 Taylor Swift is always ready to spill some tea. What that tea is, exactly, she’ll never outright say, but as any good Swiftie will tell you, she's spilling it, even if her lyrics don’t explicitly tell you what it is — or who it’s about. Swift's tradition of teasing the inner workings of her love life in between the lines of her songs has turned even the most casual T. Swift fans into top-tier detectives. Her sixth album reputation (2017), about arguably the most tumultuous era of Swift’s life, is packed with juicy details for listeners to decipher and speculate about. With that in mind, it's time to get down to some serious analytical work to dive into who Swift's "Getaway Car" is about.

"Getaway Car" appears to be about the end of a short-lived, Bonnie and Clyde-esque love story, with lyrics like, "We were cursed / We never had a shotgun shot in the dark." Of Swift's many publicized relationships, there are a few relatively short ones that stand out as potential "Getaway Car" inspiration: Harry Styles and Tom Hiddleston. But looking more closely at the timeline of their relationships and Swift's previous work, the odds heavily lean toward Hiddleston as the subject of "Getaway Car."

When albums are released, Swift typically pens songs about her more recent life events and relationships. She dated Styles in 2013, and much of her 2014 album, 1989 (and bits of Red), is suspected to have been written about her relationship with the One Direction crooner. That leaves Swift’s whirlwind summer fling with Hiddleston in 2016 the freshest, most fitting inspiration. At least, fans on Twitter certainly think so.

The theory that Swift’s "Getaway Car" is about Hiddleston begins to look indisputable when you examine the track lyrically. In the song, Swift sings about leaving an ex in a "getaway car" with a new man (the subject of the track) — "I wanted to leave him, needed a reason." This suggests a very quick transition between relationships, like, for example, the mere days that reportedly passed between Swift's high profile breakup with DJ Calvin Harris and the explosive debut of her romance with Hiddleston, when the couple were photographed cuddling on the rocks at a beach. The "getaway car" then becomes the symbol of Swift's speedy departure from Harris and her subsequent split from Hiddleston, as described in the chorus: "You were driving the getaway car / We were flying, but we never get far.”

If Hiddleston is the one supposedly driving this "getaway car," then the song also hints at some overlap between her relationships. On the track, Swift writes, "He was running after us / I was screaming 'Go, go, go!' / But with three of us, honey, it's a sideshow." It could be a reference to a simple love triangle, but put together with the first line of the song — "It was the best of times, worst of crimes" — it seems more likely that there was a bit more of a messy story there. Maybe that’s why Harris took to Twitter not long after the Hiddleswift beach photos in a now deleted rant, writing, “I figure if you’re happy in your new relationship you should focus on that instead of trying to tear your ex bf down for something to do.”

The evidence doesn’t end there. In the song, Swift also writes, “I knew it from the first Old Fashioned, we were cursed,” and the cocktails Swift and Hiddleston were spotted sipping back the early days of their relationship in 2016 were none other than Old Fashioneds. She also drops some major hints in “Getaway Car” about the setting of this doomed-from-the-beginning relationship: “The ties were black, the lies were white / In shades of gray in candlelight.” It’s well documented that Hiddleston and Swift first made contact at the 2016 Met Gala, where they were captured twirling together on the candle lit dance floor in a viral video, with Swift wearing a shiny silver (gray) dress.

The narrator of the song (Swift) also makes a point in telling her ephemeral lover (Hiddleston) that he should have seen the ending coming, wherein Swift leaves him for another man (as she once did with him) and drives off in the getaway car: “Don't pretend it's such a mystery / Think about the place where you first met me" (emphasis on the met). The Met Gala wasn’t just the location where Swift and Hiddleston met but also the spot where she was first introduced to actor Joe Alwyn, her now long-term boyfriend. As she writes in “Dress” (among other songs about Alwyn), track 12 on reputation, “Flashback when you met me / Your buzzcut and my hair bleached,” this is a clear reference to the hairstyles she and Alwyn flaunted at the Met Gala.

The story of “Getaway Car” thus comes full circle: just as Swift left Harris for Hiddleston, she now leaves Hiddleston for Alwyn, as she was bound to do from the onset of the fling. And it should really come as no shock, given that “nothing good starts in a getaway car.”

As if we needed more convincing, the sneakiest hint that "Getaway Car" is in fact about Hiddleston comes directly from Swift herself, thanks to the singer's "Look What You Made Me Do" music video. The final shot of "LWYMMD" featured 15 Taylor Swifts, reflecting the 15 tracks on Reputation. "Getaway Car" is the ninth song on the album, which means it corresponds to the ninth Taylor in the line-up. This Taylor:

Yes, the Taylor who dances surrounded by dancers wearing "I Heart TS" t-shirts in "LWYMMD" is the "Getaway Car" Taylor. The shirts, of course, are an obvious reference to the "I Heart TS" shirt Hiddleston wore at Swift's infamous Fourth of July party in 2016.

All things considered, any Swiftie will tell you all of these details together are pretty irrefutable proof that "Getaway Car" is, indeed, a song written about Swift’s whirlwind romance with Tom Hiddleston. And as much as some fans reminisce on the short-lived life of Hiddleswift (they look great together on paper), it looks like it may have just been a case of them being at the wrong place at the wrong time.