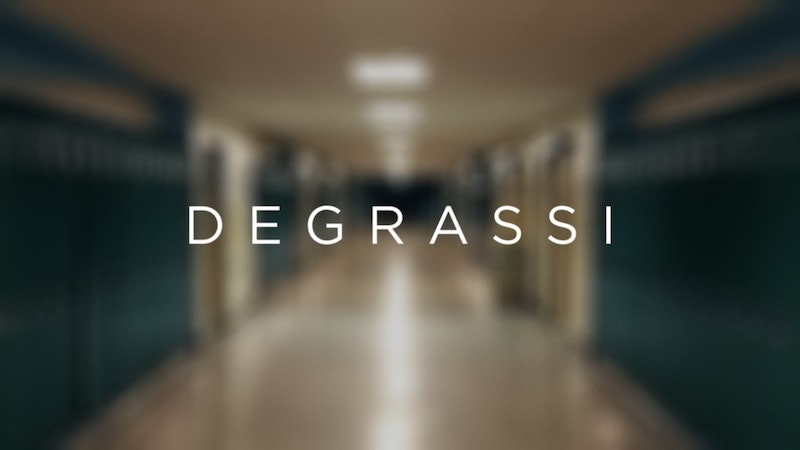 From Drake’s music to Raymond Ablack’s very dreamy romantic roles and a generation of viewers a little too obsessed with the song “Shark in the Water,” Degrassi has propelled pop culture in ways we’re only beginning to fully understand. It was also many young viewers’ first brush with TV drama — one that will live to entertain (and potentially traumatize) another generation. Announced in January, an HBO Max Degrassi reboot is in the works, and it’s helmed by two writers from the original series.

It’ll be some time before the reboot arrives (you can catch up on the entire Next Generation catalog in the meantime), but here’s everything we know about the new Degrassi cast, plot, and release date so far — plus, what some of the show’s original faves have said about the news.

There’s no trailer yet, but HBO Max revealed that the Degrassi reboot is set to premiere in 2023. Filming starts this summer.

Wondering what to expect from the Degrassi reboot? For starters, it’s not going to be Canadian Euphoria. Yes, the new Degrassi is on HBO Max, but the streamer describes it as a “teen and family series.” This is in keeping with the original show, which dealt with some very serious stuff but always kept a PG vibe. Per HBO Max:

“Degrassi is a character-driven series about the high school experience and the thrilling, often painful journey of self-discovery. Set in Toronto, the new series explores a group of teenagers and school faculty living in the shadow of events that both bind them together and tear them apart. The show travels deep into the hearts and homes of diverse, complicated characters, as they struggle to find their new normal, reaching for hope, redemption and love.”

Yeah, that’s Degrassi for you! As far as specifics go, the cast revealed some potential plotlines they’d like to explore last year before the reboot was announced. Daniel Clark (Sean Cameron) told Deadline he wants to find out about Sean’s time in the army; Shane Kippel (Spinner Mason) wants “closure” for his character’s relationship with Emma; and Stefan Brogren (Mr. Simpson, aka Snake) said he thinks he’ll be janitor one day, with Luke Bilyk (Drew) stepping into the principal shoes.

There is at least one big difference between old eps and the HBO max iteration — there will be 10 hour-long episodes this time around, while past episodes were usually shorter (and more frequent).

The new Degrassi cast hasn’t been announced yet, but the behind-the-scenes talent will give you plenty to get excited about. Lara Azzopardi and Julia Cohen have been announced as showrunners — and they have plenty of TV drama experience between them. In addition to previously working together on Degrassi: The Next Generation, Azzopardi and Cohen’s recent credits include The Bold Type and Riverdale, respectively.

Most importantly? They have the blessing from Degrassi’s mom and dad, series creator Linda Schuyler and her producer husband, Stephen Stohn. In a series of tweets, Stohn wrote that he and Schuyler “worked with Lara and Julia as writers on Degrassi in the early stages of their careers, so we are particularly proud of how their careers have soared over ensuing years.”

Is the original Degrassi cast returning for the reboot? We don’t know just yet, but there are plenty of reasons to believe there will be at least a few familiar faces. Blending generations is kind of Degrassi’s thing — Emma’s mom was a student all the way back in Degrassi Junior High. So was Mr. Simpson. And many of the school’s alums returned to the show’s Netflix era, Degrassi: Next Class, so it definitely seems like there’s a standing invitation for your Degrassi faves to come back whenever they’d like.

Cassie Steele (Manny Santos) recently joked with NYLON that she “will always think about anything if there's a lot of money to be made” and offered some possible plotlines for her character — like, maybe, coming back as “a drunk drama teacher.” Lauren Collins (Paige Michalchuk) seemed to have a meta response to the reboot news. “If any streamers are interested in the pilot I wrote about this exact moment in my life, it’s available!!” she tweeted in January.

Brogren hasn’t commented on the reboot, but he’s vocal about his love for all things Degrassi and is very much the heart of the school, so it seems plausible that he’ll be back.

Now that Degrassi is on HBO Max, maybe Drake (who serves as a producer on Euphoria) will make a cameo as Jimmy. From his “I’m Upset” music video-slash-Degrassi reunion, we know that there’s plenty of love between him and his fellow alums.

Just like Mr. Simpson, “Whatever It Takes” is another essential piece of the Degrassi canon. Even though intro specifics haven’t been revealed yet, here’s hoping the song sticks around.

Another unforgettable Degrassi tune might also make a return for the reboot, too. VV Brown, who sang the iconic “Shark in the Water” in *that* Season 10 promo, wrote that she would “love to recreate” the track for HBO Max. “I’m gonna get on the folks.” Thank you, legend!

This post will be updated with the trailer, release date, and additional plot details as more information on the Degrassi revival becomes available.

More like this
Selena Gomez’s ‘SNL’ Hosting Debut Had Twitter Gushing Over ‘Barney’ & Wigs
By Stephanie Topacio Long
Watch 'Drag Race' Queens Get New Drag Names In This Exclusive 'iCarly' Video
By Jake Viswanath
Hilary Duff Spills The Tea On Why Disney+ Canceled The 'Lizzie McGuire' Reboot
By Jake Viswanath
'Who Killed Sara?' Won’t Return For Season 4
By Brad Witter
Get Even More From Bustle — Sign Up For The Newsletter