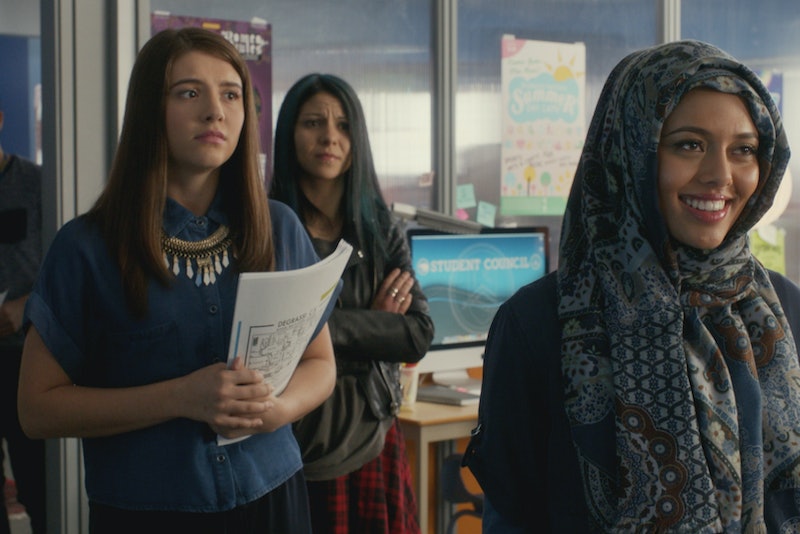 During my middle school years, no TV show taught me more than Degrassi: The Next Generation. While it's best known for jumpstarting Drake's career, the teen cult-favorite accomplished much more — covering everything from gun violence to bullying to sexual assault, without ever talking down to its audience. Now, the series' legacy lives on in Netflix's Degrassi: Next Class, which recently released its third season. (Warning: Spoilers ahead.) Initially, I was skeptical that it would measure up to the early '00s version, but I couldn't have been more wrong. Degrassi: Next Class tackles social issues head-on, just like Next Generation did, and Season 3 takes it a step further by directly addressing topics that the GOP shies away from.

Though Degrassi takes place in Canada and therefore the connection to U.S. politics likely isn't intentional, its messages still resonate. In Season 3, Degrassi: Next Class addresses subjects ranging from the Syrian refugee crisis to abortion in a way that's accessible, eye-opening, and informative. I'd argue that we could all learn a thing or two from this show — especially representatives of the Republican party. Not only that, but it's a reminder to not underestimate the younger generation. As seen on screen, today's youth are fighting for social justice and acceptance with more open minds than are often seen in their elders.

Here's how Degrassi: Next Class Season 3 flawlessly addresses very real topics — and why our own government should listen up.

I still cringe when thinking about how Donald Trump Jr. compared Syrian refugees to poisonous Skittles last September. While the image has since been deleted, the president-elect's son had shared a graphic that read, "If I had a bowl of skittles and I told you just three would kill you. Would you take a handful? That's our Syrian refugee problem." It also had the Trump-Pence logo beneath it. Along with the offensive image, Trump Jr. tweeted, "This image says it all. Let's end the politically correct agenda that doesn't put America first. #trump2016."

Meanwhile, over on Degrassi, the high school couldn't be more accepting of Syrian refugees. Having fled a war-torn country, these students are welcomed with open arms — or technically a school barbecue, signs in Arabic about safe spaces, and a centrally located prayer room. Soon after their introduction, the refugees become one with the student body. Rasha and Saad, in particular, play a more prominent role throughout the season, but they're not treated as others — they're just high-schoolers figuring things out like everyone else. If anything, their peers take extra steps to make them feel comfortable.

Then again, it's not entirely surprising, considering how warmly Canada's Prime Minister Justin Trudeau welcomed refugees at the airport in December 2015. It's a stark contrast to the U.S. president-elect Donald Trump, who revealed in October that he plans to "suspend immigration from terror-prone regions where vetting cannot safely occur. All vetting of people coming into our country will be considered extreme vetting."

A Woman's Right To Choose

In Season 3, Lola gets pregnant after realizing she hadn't taken her birth control correctly. At age 16, she simply isn't ready to be a mom, so she decides to have an abortion. Fortunately, her doctor is understanding, not judgmental. And after rumors spread around school, Lola bravely posts a vlog explaining the reason behind her decision and letting go of any previous guilt.

Considering that Paul Ryan recently announced plans to defund Planned Parenthood, a woman's right to choose is clearly still a topic of contention in the U.S. Despite the fact that Planned Parenthood does not use federal funding for abortion (because the Hyde Amendment has prohibited this for the past 40 years), many pro-life individuals are against the organization. Even president-elect Trump once said that a woman should be punished for having an abortion if the procedure was illegal. Last March, he told MSNBC's Chris Matthews:

"Well, you know, you will go back to a position like they had where people will perhaps go to illegal places but you have to ban it ... The answer is that there has to be some form of punishment, yeah."

Trump's team later released a statement to MSNBC clarifying this quote that read, "If Congress were to pass legislation making abortion illegal and the federal courts upheld this legislation, or any state were permitted to ban abortion under state and federal law, the doctor or any other person performing this illegal act upon a woman would be held legally responsible, not the woman. The woman is a victim in this case as is the life in her womb."

Trump has also stated that "pro-life justices" he appoints will likely overturn Roe v. Wade. Recently, a Texas judge blocked regulations that would prohibit doctors from discriminating against women who have previously had an abortion — meaning doctors there can actually deny treatment if they disagree with a woman's previous decision. It's mind-boggling that a teenage audience can grasp the importance of reproductive rights, yet grown adults cannot.

Historically, vice president-elect Mike Pence has not supported the LGBTQ community, including previously advocating for conversion therapy. According to Vox, Pence's archived website from his 2000 congressional campaign stated, "Congress should oppose any effort to put gay and lesbian relationships on an equal legal status with heterosexual marriage." He also reportedly wrote, "Homosexuality is incompatible with military service" when opposing Don't Ask Don't Tell. Meanwhile, Trump vowed to sign the First Amendment Defense Act, which, if passed by congress, could allow for discrimination against LGBTQ individuals.

On the opposite end of the spectrum, Degrassi has a history of spotlighting gay characters and spreading the message that love is love. This season, Zoë decides that she no longer wants to hide her sexual orientation and courageously comes out as gay to the entire school, but gets kicked out of her house by her own mother. The show doesn't brush Zoë's struggles under the rug; instead using them to show how detrimental a lack of acceptance can be. And she's not the only character in a same-sex relationship. There are also Tristan and Miles — whose love story inspires the plot of the school play. Their relationship faces its share of hardships, not because they're gay, but because Tristan experienced a traumatic bus crash.

In sharing these characters' stories, Degrassi normalizes all kinds of relationships. There's even a protest in Episode 1 when the Queer-Straight Alliance loses their meeting room. The show makes a point of standing up against inequality — something our own government could learn from.

Another ongoing plot on Degrassi centers around the character of Goldi, a Muslim student who wears a hijab. During a class discussion, the teacher mistakenly asks Goldi when she came to the country. She informs him that just because she wears a head scarf, it doesn't mean she immigrated to Canada — she's always lived there. Additionally, when a student asks Goldi her thoughts on suicide bombers, she's quick to remind him that there are 1.6 billion Muslims in the world and a majority are peaceful. In a powerful speech, she reminds her classmates that it's unfair to blame Muslims for the actions of extremists.

This would be a perfect scene for Trump to watch. According to the Washington Post, Trump was asked what measures he would take to increase surveillance of Muslims in Nov. 2015. His response? "We’re going to have to do certain things that were frankly unthinkable a year ago." Not only that, but last December, Trump stated that he wanted to ban all Muslims from entering the country "until we are able to determine and understand this problem and the dangerous threat it poses." That's quite the contrast from the message Degrassi spreads, which focuses on shattering stereotypes and promoting religious tolerance.

Perhaps one of the strongest Degrassi storylines this season was Maya's battle with depression. Without giving away any spoilers, her mental health struggle comes to a head in the very last episode. Feeling pulled in many directions, Maya meets with the school counselor, who treats her with kindness and concern. She's not belittled or dismissed, and instead her mental illness is viewed as seriously as a physical one.

Trump, on the other hand, made comments about veterans' mental health back in October that were considered problematic. Implying that "strong" people don't need any help, he said of veterans, "They see things... a lot of folks in this room have seen... and you’re strong and you can handle it. But a lot of people can’t handle it.” Besides that, Trump called Bernie Sanders "crazy" and Glenn Beck a "mental basket case." Both insults were hurled via Twitter during the campaign season. The flippant way Trump speaks about mental health is far different than the way the subject is approached on Degrassi.

While Degrassi: Next Class centers around a fictional high school, the challenges faced by its students are very real. Though these issues can't be neatly wrapped up in 24 minutes in real life like they sometimes are on the show, it's still a solid start in fostering discussions and awareness. Degrassi is fearlessly educating the next generation about difficult topics, and in the face of a Trump presidency, that is more important than ever.

More like this
Harry Styles Called For "Backlash" In Powerful Statement On Abortion Rights
By El Hunt
The 'It's A Sin' Creator Revealed A Massive Detail That Didn't Make The Final Cut
By El Hunt
Yes, Billboard Queen Angelyne Really Ran For Governor Of California
By Brad Witter
Jamie-Lee O'Donnell Will Tell The Real Story Of Derry In A New C4 Docu
By Rachel Mantock
Get Even More From Bustle — Sign Up For The Newsletter