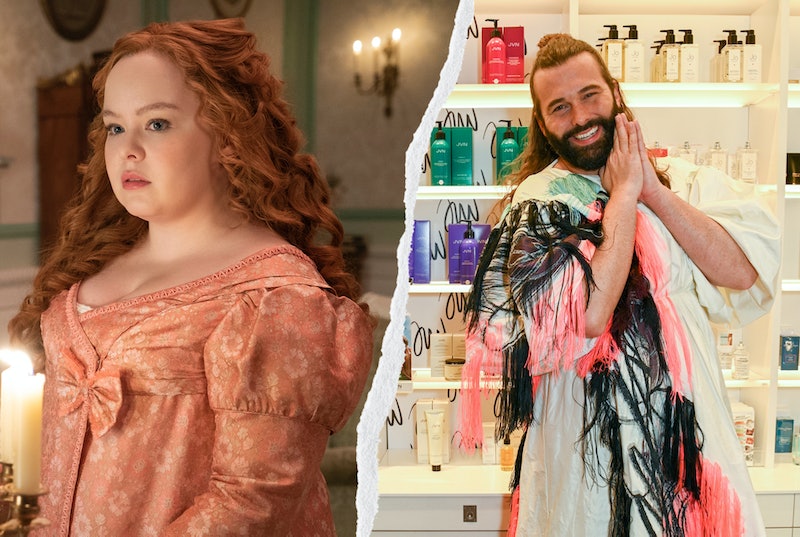 If you spent your weekend watching Bridgerton Season 2 (and perhaps swooning over a certain brooding viscount), you’re definitely not alone. Even before Netflix releases its official viewership numbers, it’s safe to say that the Regency romance’s second season is another major moment in pop culture — and Jonathan Van Ness is here for it, as ever. The Queer Eye star celebrated their birthday weekend by watching the latest season, which premiered March 25, and thanked bestie Nicola Coughlan on Instagram for manifesting the well-timed premiere.

“I CANT BELIEVE @NICOLACOUGHLAN HAD NETFLIX RELEASE THE NEW SEASON ON MY BDAY WEEKEND ... ITS SO AMAZINGG,” JVN wrote on their March 27 story, sharing a clip of a Penelope Featherington moment on screen. Technically, the timing of Bridgerton Season 2 can be partially chalked up to public health-related filming delays — but Van Ness’ explanation is way, way better. After all (and spoilers ahead), who better than a very well-connected Lady Whistledown to pull some strings at Netflix and scheme to bring about the perfect release date for JVN’s March 28 birthday?

Van Ness has been looking forward to more Bridgerton for about as long as you have. Last year, they told Bustle that they were hoping Penelope would find herself “a stunning, gorgeous suitor” in Season 2. “I just want to see her really thrive,” Van Ness said. “I want to see her meet a man who wants to treat her how she deserves to be treated. That would be really fun. I want to see Pen get swept off her feet.”

If you’ve already watched Season 2, or have even started your rewatch (*raises hand*), you know that Penelope’s romantic prospects aren’t looking the best right now — but hey, she hasn’t had her solo season yet. When the time comes, likely in Season 4, you can expect Van Ness to be as supportive as ever.

But, wait — just how did these two Netflix icons become friends in the first place? As Coughlan told Bustle in 2020, the pair met via Instagram in 2018 after she posted a video of her wearing JVN’s face on a sweater to “take a little bit of his energy onto set” with her. Since then, they’ve connected everywhere from the Bridgerton set to the virtual quiz realm during the early lockdown days. It’s been four years of friendship now, and if JVN is lucky, Bridgerton birthdays will be a long-standing tradition.