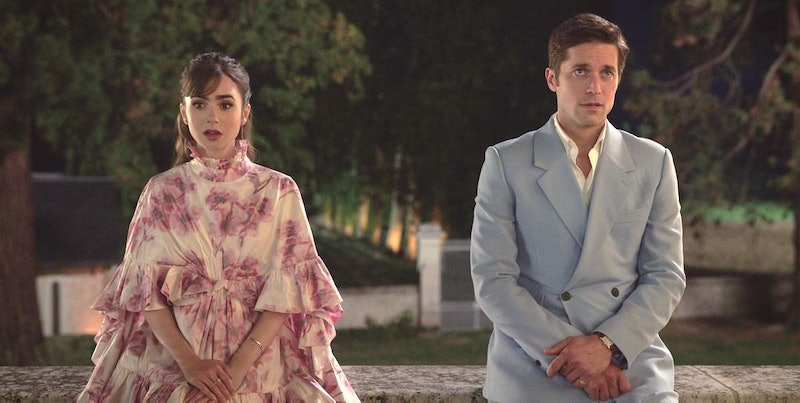 It seems like even actors themselves are fond of seeing behind the scenes content. Lily Collins has been keeping us well-fed with Emily In Paris BTS clips, first taking us through funfair rides and a look at the set pieces, and now in a new clip uploaded onto Instagram, showing viewers around one of the many beautiful shooting locations in Season 3 of the hit Netflix series.

[Spoiler alert] The video opens with Collins taking a set of stairs past mint green railings and window shutters, then turning around and shushing the camera before heading into a building. Eagle-eyed fans of the show will recognise the multicoloured coat worn by Collins as the one Emily has on while she brings Gabriel around possible proposal locations.

Collins confirmed the location as the Musée de la Vie romantique in the clip, whispering, “It’s the museum of romantic life.” Viewers are treated to scenes of the production at work in the museum, a crew member keeping things cool with a black fan, and Collins having her makeup touched up before shooting the scene.

We also see Emily and her love interest-turned-friend, Gabriel (Lucas Bravo), being filmed walking into the room, and a shot of the scene on the production monitor, before the clip ends with pink rose bushes from the museum grounds.

As we know, Gabriel’s plans to wed Camille eventually fall through dramatically, and the season ends with him revealing that she is pregnant. With the relationships between Emily, Alfie, Gabriel, and Camille all going up in flames, we cannot wait for more drama in Season 4. In the meantime, here’s hoping Collins will drop even more BTS clips with some other members of the cast.

More like this
'Bridgerton' S3 Will Show A *Very* Different Side To Kanthony
By Sam Ramsden
Twitter Is Burning As Phoebe Dynevor Reveals Daphne’s 'Bridgerton' Exit
By Sophie McEvoy
Helena Bonham Carter Doesn't Think 'The Crown' “Should Carry On"
By Sam Ramsden
A New Netflix Doc Will Explore The Unsolved Murder Of Jill Dando
By Sam Ramsden
Get The Very Best Of Bustle/UK
Sign up for Bustle UK's twice-weekly newsletter, featuring the latest must-watch TV, moving personal stories, and expert advice on the hottest viral buys.