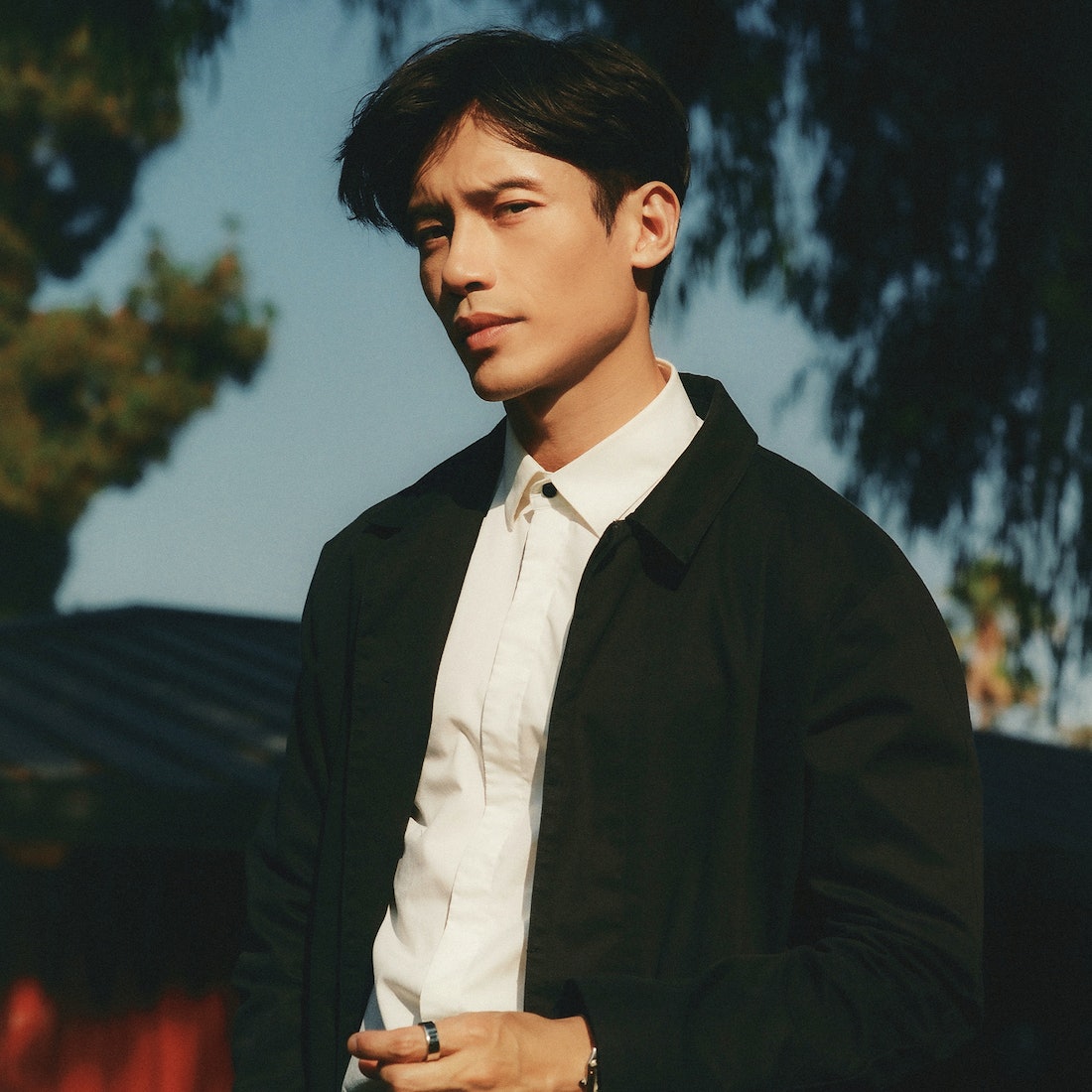 Manny Jacinto fidgets with his two rings, adjusting the silver accessories like adult fidget-spinners. The sunlight reflects off both as he swats away meddling insects in the sweltering heat in Burbank, California. “This is my statement to the world that I got engaged,” he tells me, touching the ring marking his romance with fellow actor Dianne Doan. “And then this guy is an Oura,” he says, rubbing the other band on his index finger. “It’s not actually jewelry. It’s a technological ring to help me measure my sleep.”

Jacinto tries to sleep for eight hours every night. He doesn’t drink coffee. But every morning, regardless of how long he lies in bed, the Oura clocks him at six-and-a-half to seven hours. He considers himself a “sucker for self-help and self-care,” so even as his entertainment career accelerates, he’s attempting to optimize his stillness.

In one more tracked sleep cycle, the 33-year-old will board a plane to Vancouver, Canada, to join his fiancée and family for the Aug. 18 premiere of his new Hulu series, Nine Perfect Strangers. After another night’s sleep, he’ll wake up 34, ready to celebrate his birthday by devouring his mother’s cooking. He smiles as he lists the Filipino comfort foods he’ll eat, some 1,300 miles away from this park near the Los Angeles Zoo: Sinigang (sour soup), Bistek Tagalog (beef steak), and Lumpia (spring rolls). “I’m going to reset and hopefully get away from the overhanging sense of being judged by the reviews coming out, because it can be a lot [for] someone’s mental health,” says Jacinto, who was born in Manila, Philippines, moved to Canada as a 3-year-old, and then relocated to California as an adult.

The pursuit of mental and physical betterment is what draws nine stressed city dwellers to a 10-day retreat at the fictional Tranquillum House resort in Nine Perfect Strangers, an adaptation of Liane Moriarty’s bestselling book of the same name. With the help of Nicole Kidman’s mysterious guru, Masha, the guests search for enlightenment via increasingly dangerous treatments. Jacinto plays Yao, Masha’s imperturbable assistant, who guides the guests through their stay, acting alongside Hollywood heavyweights like Melissa McCarthy, Regina Hall, and Bobby Cannavale. Sporting a minimalist tunic and long ponytail, Yao feels like an Easter Egg for fans of Jacinto’s The Good Place character, who spent multiple episodes masquerading as a silent monk.

The ponytail is already the topic of thirsty conversation, as has been Jacinto’s chiseled jawline. Last year, People named him one of the 13 “Sexiest Men Alive” alongside the likes of Michael B. Jordan, Chris Evans, and Brad Pitt. Jacinto recognizes that being deemed attractive is “a nice problem to have,” but he still finds it mind-boggling. “Asian males weren’t thought of as good-looking when I was growing up. Maybe that’s why I’m like, ‘No, I can’t be,’ because that’s not what I saw,” says Jacinto, who is of Filipino-Chinese descent. “I’m trying to figure this out with my therapist, like, why don’t I think I fit the aesthetic of good-looking?”

It’s been roughly a year since Jacinto began filming Nine Perfect Strangers in Byron Bay, Australia, and though he brought his long hair back stateside — along with some thematically appropriate tinctures and chaga mushrooms he now consumes every morning — he remembers the exact date he chopped it off. “July 16,” he recalls in an instant, citing future auditions as the reason for the haircut.

For the strangers at Tranquillum, the path to transformation is a lot less straightforward. So, too, were the cast’s interactions with Kidman, whom they didn’t meet until their first group scene. Kidman primarily remained in character until filming ended in December, with some of the cast having never yet heard her real voice.

“Nicole was the best scene partner,” Jacinto says. “She made it very easy for me to drop the fact that she’s freaking Nicole Kidman.” Together, they’d invent impromptu storylines about the strangers in between their shared scenes, including intimate ones like in Episode 4. “Sometimes I didn’t know whether I was talking to Nicole or Masha, and it kept me on my toes.”

He’s created a career he couldn’t have envisioned as a kid in Richmond, British Columbia, who loved hip-hop and graduated college with a civil engineering degree. (“If you ever cross the Pitt River Bridge in Vancouver, you can thank me for that,” he says, jokingly.)

In hindsight, though, Jacinto can trace his love of acting back to one of his earliest memories of playing pretend in the early ’90s during the height of Power Rangers mania. “I remember doing a [Power Rangers] scene, by myself, where I was acting like I hurt myself,” he says. “Then my sister came to the living room, and I guess she thought it was real. But instead of helping me, she was like, ‘See, that’s what you get.’ That was my first validation of acting. ... She believed that I was hurt.”

Yet before acting professionally, he’d largely pursued dance. A love for R&B and hip-hop acts like Boyz II Men, New Edition, and Montell Jordan inspired him to try a hip-hop dance class, where the instructor attempted to teach him a routine set to 2005’s “Wanna Love You Girl” by Robin Thicke and Pharrell. “I bombed that class, but I was able to get one move, and that was all I needed to spark something,” he says. “If I didn’t listen to that music, I don’t know if I’d be a dancer. I don’t know if I’d even be here with you, because a lot of [my acting] came from there.”

After The Good Place — for which The New York Times called Jacinto the MVP of Season 2 — he joined Netflix’s horror series Brand New Cherry Flavor, which came out in August, and will next appear in Top Gun: Maverick alongside Tom Cruise in May 2022.

But even with his growing popularity, he’s selective of the roles he plays to avoid being typecast. “It’s [always been] a big thing for me, to pick roles that aren’t stereotypical and show people, especially other Asian kids … that they don’t have to be a nerd or a stereotype. It’s all a conscious decision.” He finds comfort seeing more representation across genres, referencing Simu Liu from Shang-Chi, John Cho from the forthcoming Cowboy Bebop, Maya Erskine from PEN15, and Henry Golding from Snake Eyes. HBO Max recently revived the martial arts drama Warrior, starring Jacinto’s fiancée, Doan, in another boost for Asian representation onscreen.

Offscreen, the power couple adopted a pandemic puppy in 2020, one they’re leaving in Los Angeles with a friend for 10 days while they escape to Canada. “Henri is a hippo. She’s literally just a hippo,” Jacinto says of the 40-pound pup, who’s a mix of American Bully, Pit Bull, French Bulldog, and Staffy. “[Henri has] taught me more responsibility and maybe what it would be like to have a kid. But Henri is a momma’s girl. I’m kind of just on the sidelines.” Eventually, Jacinto “absolutely” wants to be a parent, he says. “We’ve got some time, but that’s definitely going to be a stage in our lives.”

In a dream world, in addition to getting married and having children, he’d star in an indie project from the zeitgeisty production company A24 — responsible for films like Zola, Minari, Midsommar, and Moonlight — and join a live-action adaptation of the Attack on Titan anime, should there be one. Maybe he’d act or dance in a music video. “The first person that pops into my head, honestly, is Olivia Rodrigo,” he says when asked. “She’s representing for the Filipinos.” He also wants to experience going to Sundance and winning an Oscar: “A little statue would be nice.”

“Oh man, I dream about everything,” Jacinto says. “My mind is always on the next thing. I need to take a moment to celebrate.”

And celebrate he will, in a “quiet,” very Yao-like manner during his trip to Canada, by hitting golf balls with his father. “[I’ll be sitting there] with my dad, like, ‘I’ve come a long way since I first came to this driving range when I was 6.’ It’s a ritual. It’s the one thing I can share with my dad.”

Comfort food with his mother. Comfort golf with his dad. Comfort rings on his left hand, with a bit of tech-aided optimization.