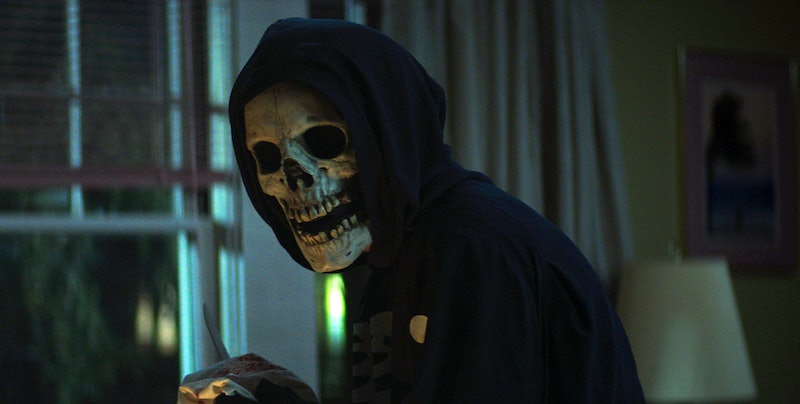 If you obsessively read the iconically creepy novels by R.L. Stine under the covers with a flashlight as a kid so the ghosts and monsters couldn’t catch you, then you’re in for a treat. Netflix is bringing the author’s Fear Street series, which has sold over 80 million copies worldwide, to the small screen as a trilogy of full-length films released over three weeks. But unlike the Goosebumps movies and television series, Netflix’s Fear Street trilogy will reimagine the teen novels as truly terrifying horror films not suitable for the squeamish. “Fear Street fans are in for a treat — and some major surprises,” said Stine in a press release. “Readers know that the book series is rated PG. But the movies are rated R. That means a lot more thrills — and a lot more terror!”

From Fear Street’s plot to its cast — which includes two Stranger Things stars — and release date, here’s everything we know about the film trilogy.

Directed by Leigh Janiak (MTV’s Scream: The TV Series), the three installments of Fear Street take place in the town of Shadyside (from the original book series) in 1994, 1978, and 1966, respectively. Part 1 is set to follow a group of teenagers in a town that has been terrorized for generations as they realize the haunting events may be connected — and that they could be the next victims.

“We filmed all three Fear Street movies over one crazy, bloody summer. It’s a dream that audiences now get to experience the story in the same way — back to back to back, with only a week of waiting in between,” Janiak told Netflix. “I can’t wait to welcome everyone into the world of Fear Street in 1994, 1978, and 1966!”

“I have seen Leigh Janiak’s epic trilogy releasing on Netflix in July, and I can tell you the scares and the SCREAMS are more than I ever expected,” Stine said to the streaming service. “What fun to see the horrors of Shadyside come to life!”

In the trailer for Fear Street Part 1: 1994, released on June 28, a mysterious murderer in a Halloween skull mask kills a group of individuals at a Shadyside shopping mall — which is unfortunately the latest in a string of horrific events that have occurred in the small town. While lead character Deena (Kiana Madeira) disagrees, her brother and high school peers speculate that the killer is an “angry, dead witch” from Shadyside. As more terrifying events plague the town and specifically the teenagers, they become determined to get to the bottom of the story.

On June 9, Netflix released the first official trailer for the Fear Street trilogy, and despite the uplifting beat of Gloria Gaynor’s “I Will Survive” playing in the background, it’s clear not everyone in this cursed town will.

The official trailer for Part 1: 1994 was released on June 28, providing viewers with a deeper look at the film’s plot as well as many, many scary scenes that are sure to keep you on the edge of your seat.