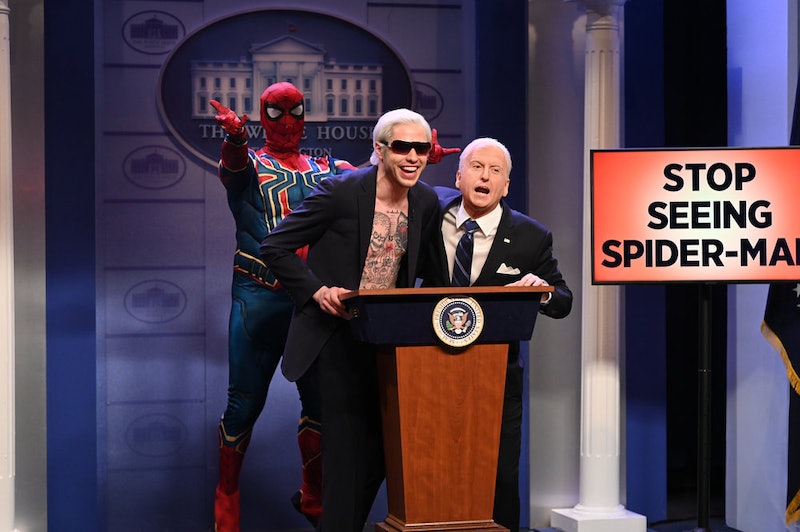 One month after Spider-Man: No Way Home hit theaters, Saturday Night Live’s resident Joe Biden has a request — more of a beg, really. “There’s one simple thing you can do to make this whole virus go away: stop seeing Spider-Man,” says James Austin Johnson’s version of the president in the show’s Jan. 15 cold open.

The Biden spoof was willing to blame everything from inflation, to the spread of omicron, to the filibuster on the movie (“You think people can focus on voting rights when Spider-Man’s Aunt May is a freaking smokeshow?”), before pivoting to an even wilder argument: that the multiverse is real and we’re all living in it. Soon, a new Biden variant joined him on stage, looking a lot like Pete Davidson.

Sporting sunglasses, platinum hair, and an open blazer revealing a chest full of tattoos, the variant assured viewers that he’s actually Biden from the “real universe.” The timeline we’ve been living in, he explains, is actually a big joke that got out of hand after the Chicago Cubs’ historic World Series win. “Everyone on Earth is better off in the real world except one man, named Pete Davidson,” the “real” Biden says. “Your world is maybe more fun for him,” a not-so-subtle nod at Davidson’s thriving social life — most notably, his relationship with Kim Kardashian.

As Davidson’s Biden ushers his new friend off stage before the multiversal portal closes, another cameo crashes the sketch: this time, Spider-Man himself. No, it probably wasn’t Tom Holland, Andrew Garfield, or Tobey Maguire under the web-slinger’s mask. (Well, that we know of.) Several Twitter users were willing to believe it was, indeed, a famous Peter Parker in costume — or at least had fun guessing who it could be.

In the meantime, that “real world” sounds like a pretty great place — where’s Doctor Strange when you need him?