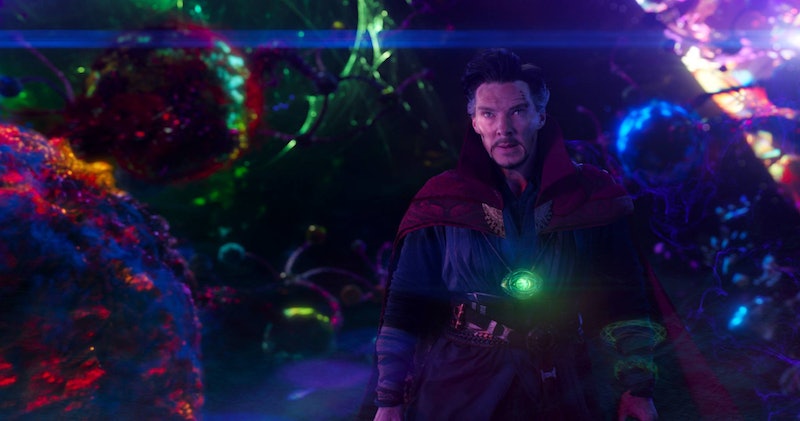 Spoilers ahead for Spider-Man: No Way Home. As if you weren’t already trying to process the emotional, web-slinging ride that was Spider-Man: No Way Home, the film’s final post-credits scene served as a reminder of what the Marvel Cinematic Universe has in store. In what was essentially the first teaser for Doctor Strange in the Multiverse of Madness, viewers got to see what Stephen Strange got up to after helping Peter through his identity crisis — and it’s pretty messy.

First, a brief recap of Strange’s role in No Way Home: No longer the Sorcerer Supreme (that title went to Wong during the Blip), he agrees to perform a spell for Peter so that people can forget he’s Spider-Man. Peter botches the spell along the way, though, leading to disastrous results that, ultimately, can only be fixed by erasing the world’s memory of Peter altogether. Even the ever-cool, aloof Strange is pretty broken up about forgetting his young fellow Avenger, which, ouch.

Doctor Strange in the Multiverse of Madness seems to pick up after No Way Home, but if Strange doesn’t know who Peter Parker is, will he even understand why he helped screw up the multiverse in the first place? It’s one of many questions only the movie can answer. But until then, here’s everything you should know about the Doctor Strange 2 cast, plot, and that shocking first look.

In addition to Benedict Cumberbatch returning as the titular sorcerer, the Doctor Strange in the Multiverse of Madness cast will include familiar faces from the first film, like Rachel McAdams (Christine Palmer), Chiwetel Ejiofor (Mordo), and Benedict Wong (Wong). It will also add Elizabeth Olsen (Wanda Maximoff) to the mystical fold and introduce Xochitl Gomez as America Chavez. Per Inverse, the young hero can travel through different dimensions, making her a fitting addition to whatever multiversal mayhem is going on here.

Behind the scenes, the MCU’s next film is helmed by director Sam Raimi (of the original, early-aughts Spider-Man trilogy) and co-writers Michael Waldron (head writer of Loki) and Jade Bartlett.

The plot of Doctor Strange in the Multiverse of Madness is still shrouded in mystery, though the new teaser (more on that later) definitely provides a glimpse at a scarier side of the MCU. Though this is definitely a sequel to Doctor Strange first and foremost, it will also continue the story set forth in WandaVision.

“I really worked with [Olsen] and made sure, ‘OK, you guys just did this incredibly intimate show about this character that grew her so much,” Waldron told Collider in June. “‘Let's make sure that we're doing that justice and telling a fulfilling next chapter of that story.’”

For a week, the only way to catch the first glimpse of Doctor Strange in the Multiverse of Madness was to buy a ticket to Spider-Man: No Way Home, where a teaser appeared as the second (and final) post-credits scene. Fortunately, the real thing — no smartphone bootleg needed — was finally uploaded to YouTube on Dec. 22.

The brief teaser sees Strange enter a shadowy, fractured world. He’s warned that his “desecration of reality won’t go unpunished,” a follow-up to the foreboding warning Mordo issued in the first Doctor Strange. At one point, we see Christine Palmer in a wedding dress. Strange approaches Wanda doing some gardening (hey, she’s been stressed out lately!) but assures her that he’s not there to discuss Westview. Rather, he’s asking for her help dealing with what must be a pretty grave (and mystical) threat which appears to be Strange himself. Maybe it’s more variant business?

Though Doctor Strange in the Multiverse of Madness was originally set to premiere this March, its release date was recently pushed back — along with the entire slate of upcoming MCU films. You can now plan to watch the sequel on May 6.

This post will be updated with additional plot details as more information on Doctor Strange 2 becomes available.

This article was originally published on Dec. 17, 2021