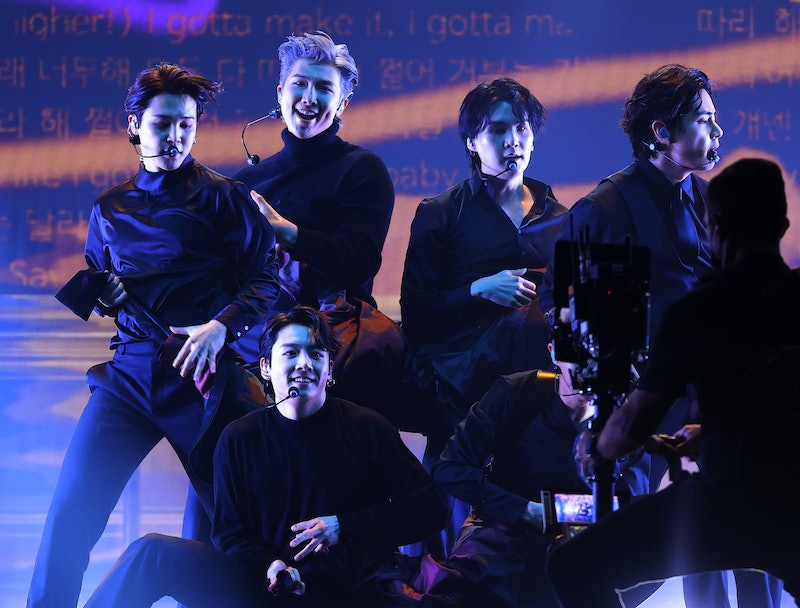 Before all the trending TikTok dances, there was “Gangnam Style,” K-pop rapper Psy’s 2012 hit-turned-global craze. That song’s music video attracted more than 4.4 billion views on YouTube over the years, and now Psy is making a comeback. This time he enlisted another of Korea’s most buzz-worthy artists: a member of global superstars BTS. The 44-year-old rapper revealed on Instagram that he collaborated with BTS’ Min Yoon-gi (aka Suga) on “That That,” the title track of his comeback album, Psy 9th, after a five-year hiatus. Other songs on his ninth studio album also feature South Korean artists, including Bae Suzy and Crush.

Initial teasers for “That That” had Suga credited as the producer — but not as a featured artist. So it came as a surprise when the teaser music video, released by both artists on Instagram on April 28, featured both of them rapping and dancing. The full song and music video dropped on April 29, along with the rest of Psy’s album. The upbeat single begins with Psy poking fun at his hiatus with lines like “Long time no see, huh?” while Suga joins in midway, spitting his own verse. The video also features a Wild West aesthetic complemented by their cowboy-inspired outfits (think: fringed jackets) and saloon settings. And both of them go hard on the high-energy choreography.

In a promotional interview posted to Psy’s Instagram account, he shared how Suga’s involvement grew from initially only producing the song. Sharing how the BTS member initiated the partnership, he said, “Step by step, he got involved more and more deeply,” followed by an evil laugh. In the same interview, Suga said, “I seriously didn’t expect to dance with Psy. I thought I was only writing the song.”

In a different clip, the 29-year-old BTS rapper also revealed he was “quite nervous” to work with Psy because “he’s many years my senior and someone who’s so well-respected in the business.” The songwriting process quickly became “fun.” “It felt like working with a childhood friend,” Suga said. “We became besties in a way.”

While the seven-member group sometimes collaborates with artists as a unit — most recently with Megan Thee Stallion for the “Butter” remix and Coldplay for “My Universe,” they also encourage individual members to pursue solo careers and work with other artists independently. Suga’s collaboration with Psy comes on the heels of his “Girl of My Dreams” collab with Juice Wrld last December. As a solo artist, he’s also previously collaborated with Halsey, MAX, and IU, as well as released singles like “Daechwita” under his rapper name Agust D.

The BTS ARMY, the collective term for the septet’s fandom, know that this collaboration has been a long time coming. For years, BTS members have been vocal about looking up to Psy. One member, Kim Taehyung, aka V, was even quoted in one of BTS’ produced shows saying he was impressed by Psy and wanted to be like him. Years later, in September 2020, the two developed a friendship.

The band has also been seen singing and dancing to several of Psy’s hits on different occasions. In 2015, BTS danced to Psy’s “Daddy” on the South Korean music broadcast program Inkigayo. While in Run BTS, the group’s variety show, several of Psy’s other hits made appearances. In one episode, rapper J-Hope sang “Gangnam Style” and the rest of the band joined in.

Psy has also been supportive of the group for years. In 2018, BTS’ “Fake Love,” the lead single of Love Yourself: Tear, made the Top 10 in Billboard’s Top 100, marking the first time a BTS song made it that high on the charts. It was also the first time a Korean act topped the charts since Psy. The K-pop veteran took to Twitter to congratulate them. Retweeting the Billboard article, he wrote, “#stronger #proud.”

Hopefully, “That That” will tide over ARMYs eager for new BTS music, which will follow on June 10. We’re counting down.

More like this
Elizabeth Olsen's Chris Evans Friendship Update Was Accidentally Hilarious
By Grace Wehniainen
Marvel's 'She-Hulk' Trailer Is Finally Here & The Hulk Lends A Big Helping Hand
By Grace Wehniainen
Britney Spears Met The Weeknd & Sam Levinson, So She May Actually Be On 'The Idol'
By Jake Viswanath
Kim Kardashian Reacts To Kanye West’s Diss Song “Eazy” On 'The Kardashians'
By Jake Viswanath
Get Even More From Bustle — Sign Up For The Newsletter