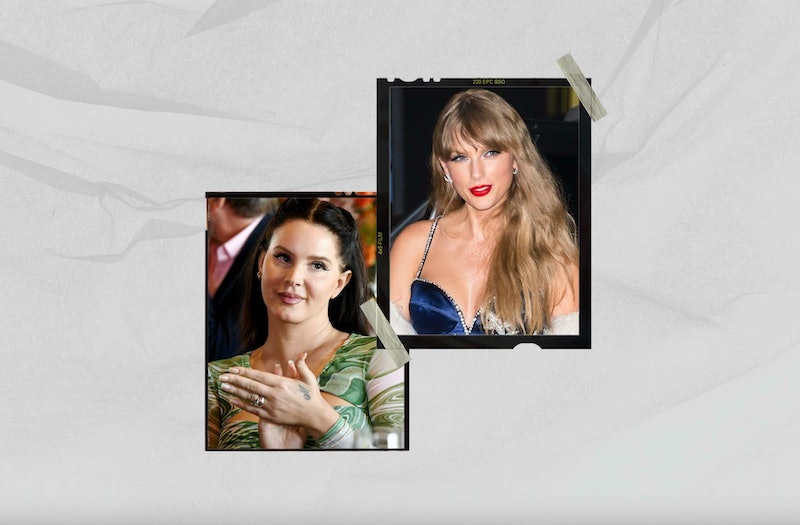 When Swifties push play on Taylor Swift’s Midnights for the first time on Oct. 21, the fourth song they’ll hear is “Snow on the Beach” featuring Lana Del Rey, who is the only featured artist on the album. The collaboration has been a long time coming, with Swift leveraging her years-long love of Del Rey’s music to manifest this new duet. “Her imagery — it’s poetic,” Swift said of the “Summertime Sadness” singer in a 2019 interview with Entertainment Weekly. “It’s also full of modern pop culture and throwback nostalgia. Anything that she puts out, I’m going to not only listen to but do a full read-through of the lyrics.”

Three years later, Swift announced on Oct. 7 that Track 4 on Midnights will be a collaboration with Del Rey. Four days later in an Instagram video, the “All Too Well” singer described 37-year-old Del Rey as “one of the best musical artists ever” and doled out even more praise. “The fact that I get to exist at the same time as her is an honor and a privilege, and the fact that she would be so generous as to collaborate with us on this song is something I’m gonna be grateful for for life,” Swift, 32, said. “Absolutely love her, and I really hope you love the song as much as I do.”

READ NEXT: Janet Jackson Is In The “Snow On The Beach” Lyrics

The hype for this Midnights duet is high, with fans scratching their heads about the song title and its potential meaning. Here’s what we know about “Snow on the Beach.”

What Does “Snow On The Beach” Mean?

On Oct. 11, the 11-time Grammy winner revealed that “Snow on the Beach” is a love song about the feelings a couple feels exactly when love blossoms simultaneously from both sides (maybe about herself and Joe Alwyn, her boyfriend of six years).

“The song is about falling in love with someone at the same time as they’re falling in love with you — sort of in this cataclysmic, fated moment where you realize someone feels exactly the same way that you feel at the same moment,” Swift said in an Instagram video. “And you’re kind of looking around going, ‘Wait is this real? Is this a dream? Is this for real? Is this really happening?’ Kind of like it would be if you were to see snow falling on a beach.”

Is There A “SOTB” Music Video?

Swift hasn’t revealed plans for a “Snow on the Beach” music video, but if history repeats itself, fans can anticipate a “SOTB” music video in the future. Swift often creates and releases music videos for her collaborations, including 2022’s “Joker and the Queen” with Ed Sheeran, 2021’s “I Bet You Think Of Me” with Chris Stapleton, 2019’s “Me!” with Brendon Urie, 2018’s “Babe” with Sugarland, 2017’s “End Game” with Sheeran and Future, 2017’s “I Don’t Wanna Live Forever” with Zayn, and 2015’s “Bad Blood” with Kendrick Lamar.

While you wait for a potential “SOTB” video, watch the “Anti-Hero” video instead.

What Are The “SOTB” Lyrics?

“Snow on the Beach” was the final Midnights song title Swift announced during the 13th episode of her TikTok series Midnights Mayhem With Me. Here are the lyrics, including a shout-out to Janet Jackson (“Now I’m all for you like Janet,” a nod to her 2001 hit “All For You”).

One night a few moons ago

I saw flecks of what could've been lights

Passing by unbeknownst to me

And time can't stop me quite like you did

And my flight was awful, thanks for asking

I'm unglued, thanks to you

Flying in a dream

Stars by the pocketful

This scene feels like what I once saw on a screen

I've never seen someone lit from within

Blurring out my periphery

And to hide that would be so dishonest

And it's fine to fake it till you make it

Till you doTill it's true

Flying in a dreamStars by the pocketful

I can't speak, afraid to jinx it

I don't even dare to wish it

But your eyes are flying saucers from another planet

Can this be a real thing, can it?

Snow at the beach

Flying in a dreamStars by the pocketful

This article was originally published on Oct. 12, 2022