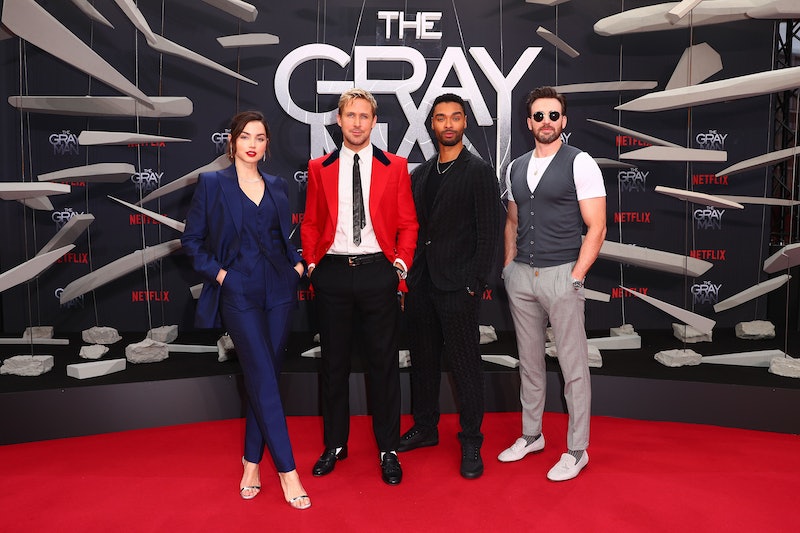 It's time for Bridgerton and Marvel to assemble for a new star-studded movie. Netflix’s next blockbuster-level project is The Gray Man, an upcoming adaptation of Mark Greaney's thriller novel — and the cast includes none other than the Duke of Hastings himself, Regé-Jean Page.

According to Deadline, the project is set to be Netflix's most expensive yet, with a "budget upward of $200 million" and franchise plans in the works à la James Bond. (Great news for Page fans who can already envision him in a 007 role.) That budget seems to have helped Netflix procure some serious star power, from the cast to the crew behind the scenes. Here is everything we know about The Gray Man so far.

The splashiest part of The Gray Man news, so far, is its iconic cast. Page will join Chris Evans and Ryan Gosling, who were announced along with the project in June. According to Netflix, Gosling will play the Gray Man himself, Gentry, "as he's hunted across the globe by Lloyd Hansen (Evans), a former cohort of Gentry’s at the CIA."

Take a deep breath because the behind-the-scenes side of The Gray Man is just as stacked with talent as the cast. Joe and Anthony Russo of Avengers fame are directors, with Joe writing as well. According to Netflix, Christopher Markus and Stephen McFeely, who wrote Infinity War, Endgame, and several other Marvel projects, will "polish" the script.

The Gray Man is based on the first of Greaney's thriller series about the Gray Man, "a legend in the covert realm, moving silently from job to job, accomplishing the impossible, and then fading away." While Netflix announced this film would feature Lloyd Hansen pursuing the Gray Man, the Russos plan to do future installments, too.

"The movie is a real mano a mano between those two great actors who represent two different versions of the CIA, in what it can be, and what it can do," Anthony said to Deadline. "For those who were fans of Captain America: Winter Soldier, this is us moving into that territory in more of a real-world setting. That’s what this movie really means for us."

More like this
Here’s Everything Coming To & Leaving Netflix In February
By Jake Viswanath
Netflix Shut Down 'Bridgerton' S3 Rumours About A “Very Dark” Storyline
By Bustle
Pamela Anderson’s Dating & Marriage History Could Be Its Own TV Series
By Jake Viswanath
Kukulkan From 'Wakanda Forever' Has A Surprising Connection To Marvel History
By Grace Wehniainen
Get Even More From Bustle — Sign Up For The Newsletter
From hair trends to relationship advice, our daily newsletter has everything you need to sound like a person who’s on TikTok, even if you aren’t.