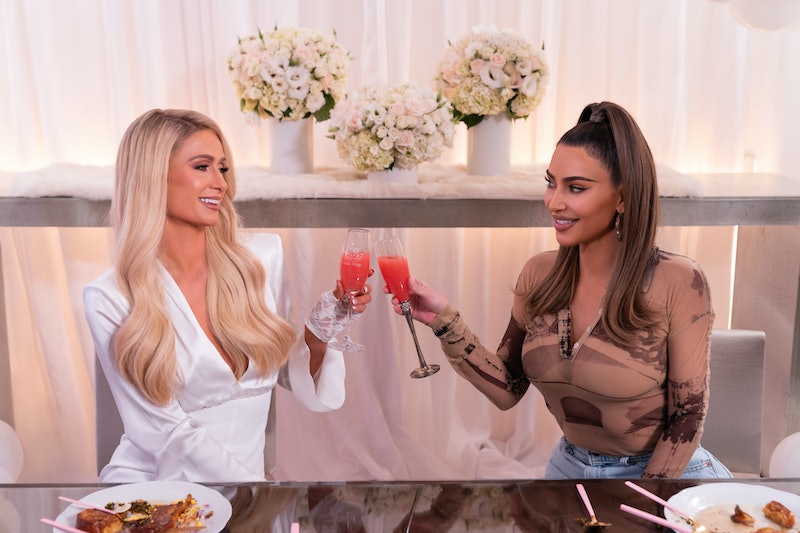 Once upon a time, many years ago, Kim Kardashian wasn’t a household name. Instead, she was working for her famous friend Paris Hilton as an assistant. While that feels like ancient history now, Hilton and Kardashian’s friendship is truly what kickstarted the now-megastar’s rise to fame. The iconic duo were first spotted by paparazzi while shopping and partying at former Hollywood hotspots in 2006, when Hilton was experiencing peak tabloid scrutiny. Soon enough, Kardashian became a tabloid staple herself, eventually causing friction between the two, but their friendship timeline has actually been a rollercoaster ride since they were little.

Kardashian and Hilton may not be as close today as they were back when they walked red carpets side-by-side on a regular basis, but they’ve been able to reach BFF status again. The twosome reunite often and collaborate professionally on their various projects and businesses — like Kardashian’s Skims shape-wear line, Hilton’s groundbreaking 2020 documentary, and most recently, Hilton’s 2021 Netflix show Cooking With Paris. Lately, Kardashian has also been more vocal about the role Hilton played in getting her career started, giving credit where credit’s due. Here’s everything you need to know about Kardashian and Hilton’s friendship, from when they met to where they stand today, because this piece of pop culture history should never be forgotten.

Sometime In The 1980s: The Beginning

It’s hard to place where Hilton and Kardashian's friendship officially began, but in multiple interviews, Hilton has said they've been close since they were "little girls." They both grew up in Los Angeles, but attended separate high schools, so that crosses one possibility off the list. They did, however, share a mutual friend growing up: Nicole Richie.

While Hilton was filming The Simple Life with former bestie Nicole Richie, Kardashian made several appearances on the show while working as her assistant. She even helped Hilton get her closet under control with her organizing business, as seen in the clip above. It's reality television gold, honestly.

As Hilton's friendship with Richie came to an abrupt end, Kardashian stepped up to fill that BFF-shaped hole in Hilton's heart. In 2015, Kardashian told Rolling Stone that she and Hilton were all about getting attention back then, saying:

“We'd go anywhere and everywhere just to be seen. We knew exactly where to go, where to be seen, how to have something written about you. All you had to do is go to this restaurant, or this party, talk about whatever you want to talk about, and it would be in the paper the next day.”

At some point during 2006, Hilton and Kardashian took a trip to Ibiza that they've both shared throwbacks from over the years. Clearly the vacation was meaningful to them — and based on the photos, so were headbands apparently.

2007: Kim Supported Paris When She Received Her Sentence

In May 2007, Hilton received a sentence of having to do time for 45 days; in an interview with Hollywood.TV, Kardashian confirmed that she reached out to Hilton after her sentencing, saying that “you have to support people that you love.” It seems that Kardashian genuinely supported Hilton in her time of need — unlike her sister Khloé, when she just took selfies while dropping her off for her sentence.

As TMZ reported in April 2008, during a Las Vegas radio show interview, Hilton said that Kardashian's butt looked like "cottage cheese stuffed in a trash bag," which pretty much guaranteed she and Kardashian were no longer on good terms. Kardashian did say later on that Hilton called her to apologize, so at least there's that.

In an interview with Harper's Bazaar that year, Kardashian explained she drifted apart from Hilton, but she seemed to be very at peace with it. She told the mag:

“We don't really talk. As I always say, everyone comes into your life for a reason, a season, or a lifetime. And she was in my life for a long time ... There comes a point in life where you just grow apart and you realize you're not as similar as you thought. And I never run into her anywhere. Isn't that so weird?”

Kardashian and Hilton were looking pretty friendly at Italian fashion designer Riccardo Tisci's birthday party in 2014 ... in Ibiza. And judging by Kardashian's Instagram caption, they talked about what happened during their 2006 trip. She even threw in one of Hilton's signature phrases: “Loves it.”

In a 2015 interview with Glamour, Hilton shared that she was proud of Kardashian, squashing the rumors that a feud still existed between them. “She's always had a great work ethic like me and she's always been determined,” she said. “And that's what it's all about. I'm so proud of her. When she's at home, she's very normal like anyone else with a glamorous life. She's chill, she's so sweet.”

Hilton attended Kardashian's family Christmas party in 2016, and shared photos on Instagram with several members of the famous family, including Khloé Kardashian and Caitlyn and Kylie Jenner. If the rest of the fam was cool enough with Hilton to do that, there's a good chance that any beef between Kardashian and Hilton is long gone.

Rather than do an old-fashioned runway show, Kardashian’s then-husband Kanye West presented his Yeezy Season 6 collection through staged paparazzi shots of Kardashian herself. However, not satisfied with just leveraging his wife, West upped the ante by flooding Los Angeles with Kim K lookalikes for paparazzo to fawn over — including Hilton. Yes, she transformed into her on-again BFF, bleach blonde hair and all, in what may perhaps be the most meta moment in their long friendship.

Hilton received one of Kardashian's coveted fragrance chocolate heart boxes for Valentine’s Day. And while Kardashian did send some to her haters, Hilton seemed to take her box as purely a nice gesture. She even hung out with Kris Jenner at a fashion show later that month, proving that she’s still close with the entire family.

When Kanye West calls you "Bff," you must really be best friends. As seen in this video from the Kardashian-Jenner Christmas party, Hilton joined the family's holiday festivities yet again in 2018. Based on social media posts from that night, Hilton and Kardashian went sledding together as well. Santa Claus may be looking for a new job soon.

Hilton may celebrate her birthday in February, but her 38th birthday bash was fashionably late. Hilton threw a belated celebration on March 16, where she reunited with Kardashian and her sister Kourtney, who posted photos from the fête on their Instagram Stories. After the party, Hilton posted a video with Kardashian on Instagram, showing off their fab party looks. “Happy Birthday Paris, even though your birthday was a month ago, this is how she celebrates, with lots of friends,” Kardashian said. “But she deserves it.”

As if the title didn't speak for itself, Hilton's "Best Friend's Ass" video featured none other than Kardashian, making it clear that Hilton takes back her snarky cottage cheese comments from 2008. In a recent episode of KUWTK, Kardashian talked about filming the video with Hilton. "I really would wanna do anything for her,” she explained. “She literally gave me a career. And I totally acknowledge that.”

The new season of E! True Hollywood Story includes an entire episode about Kardashian's rise to fame. Kardashian makes sure to note that she wouldn't be where she is without Hilton. "I really am grateful for my experiences with her… She’s a huge, huge reason of my success," Kardashian said, calling the Simple Life star her "mentor."

Like any friendship, Kardashian and Hilton have had their ups and downs, but they finally seem in a good place. Maybe one day they'll even celebrate their decades-old bond by returning to Ibiza for a KUWTK episode and finally explaining what really happened on their first trip.

September 2020: Kim Appears In This Is Paris

In September 2020, Kardashian appeared in Hilton’s revealing YouTube documentary This Is Paris, where she affirmed that Hilton was responsible for her own fame and said that she learned so much by simply seeing Hilton do her thing, especially when it came to reality TV. “I wouldn’t be here today if it hadn’t been for her starting out in the reality world and her introducing me to the world,” Kardashian recalled. “The best advice that she ever could’ve given me is just watching her.”

There’s nothing that sells better than nostalgia, which Hilton and Kardashian can provide in spades with their longtime friendship alone. Add in a velour tracksuit and it’s the early 2000s all over again. Kardashian launched Skims velour tracksuits in October and tapped Hilton to appear alongside her in the ad campaign, an appropriate choice given how she helped popularize the iconic Juicy Couture tracksuit. Combined with their rhinestoned Razrs, Hilton and Kardashian made a great argument for a Simple Life reboot with these ads.

Who needs Gordon Ramsey when you have Chef Hilton? The heiress landed her own Netflix show, Cooking With Paris, after she posted a viral YouTube video of her now-famous lasagna recipe. For the new show, she’s bringing in famous friends like Kardashian to help her in the kitchen. But of course, they mostly just gossip and share memories as their recipe slowly becomes a disaster. “I loved cooking brunch with @KimKardashian!” Hilton wrote on Instagram, sharing a photo of the duo cheers-ing with pink drinks. “So excited for you all to watch!” Kardashian appears in the show’s first episode, which premiered on Netflix on Aug. 4. Together, they made a fluffy frittata. “I actually make that almost every weekend now for brunch for my fiancé,” Hilton told Bustle. “We love it.”

On Nov. 11, Kardashian was one of the few A-list guests at Hilton’s wedding to Carter Reum, and she couldn’t have been a more supportive friend. After the ceremony, the KUWTK star met up with the bride to pose for photos. At one point, Kardashian even stepped in as stylist once again and fluffed the tulle skirt and dramatic veil of Hilton’s custom Oscar de la Renta wedding gown, a cute moment that Hilton posted on Instagram. “Such an incredible evening @KimKardashian,” she wrote on Nov. 17. “You looked stunning and loved celebrating my big day together.”

As seen on Hilton’s Peacock wedding series Paris In Love in January, Kardashian asked the bride to throw her the bouquet, in reference to her divorce from West, and told her how stunning her dress was. “Thank you, I wasn’t ready, I was not prepared,” Hilton said, to which Kardashian quipped back, “You never are.” Hilton then gave a warning about her first dance with Reum, set to Bruno Mars’ “Just The Way You Are.” “It’s brutal... I suck at dancing, it’s so hard,” she said, before Kardashian simply reassured her that the ceremony was “beautiful” — and reminded her to “look at her” while throwing the bouquet. What else are friends for?

More like this
Kim Kardashian Gives “Bucket List Dream” Lecture At Harvard
By Alyssa Lapid
Reese Witherspoon Confirms This Fan Favorite Will Return For 'Legally Blonde 3'
By Jake Viswanath
Alicia Silverstone Revives Her 'Clueless' Character In This Super Bowl Commercial
By Jake Viswanath
Ashton Kutcher Wants Danny Masterson “To Be Found Innocent” In Rape Retrial
By Jake Viswanath
Get Even More From Bustle — Sign Up For The Newsletter
From hair trends to relationship advice, our daily newsletter has everything you need to sound like a person who’s on TikTok, even if you aren’t.

This article was originally published on March 27, 2018