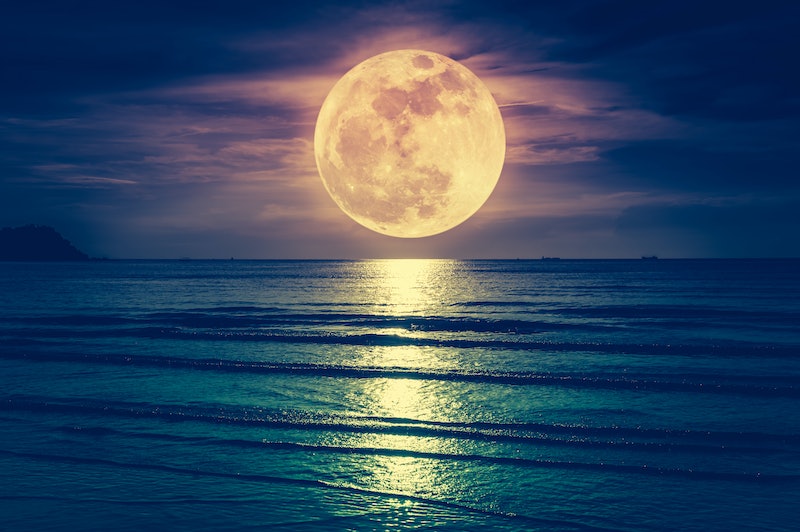 Full moons are almost always a time of illumination and emotional swelling, but the July 2020 full moon is going to be particularly potent. Firstly, this luminary is also a lunar eclipse, which is known to bring powerful and unexpected endings and changes. In other words, we're in for an emotional ride.

Additionally, the full moon reaches its zenith on the night of July 4 (or just after midnight on July 5, if you're in the eastern time zone), aka the United States' "birthday" — which brings forth a whole lot of symbolism for the collective, especially because it's taking place in the authority and tradition-focused sign of Capricorn. With such an intense lunation taking place, it's helpful to know what you should and shouldn't do during the July 2020 full moon eclipse to avoid major drama.

"This will be the final eclipse in a nearly two year long eclipse series in Cancer-Capricorn that began in 2018 and lit up [the zodiac] axis ruling home, the homeland, priorities, security issues, and our basic structures — shifting our perception of security (Cancer) and authority (Capricorn)," astrologer Leslie Hale of Keen.com tells Bustle. "Whatever lessons we have learned ... will come to a head with this final eclipse in Capricorn." Look back to what was happening in your life during the last Capricorn eclipse in late December 2019. It's likely that those same themes will resurface this weekend and perhaps take an unexpected turn in order to bring some closure.

But remember, star babies: Eclipses aren't a bad thing. While the sudden twists of fate and unexpected endings they tend to bring forth can be jarring, we can align ourselves with the energy in a more free-flowing way. Here are the do's and don'ts of the July 2020 full moon lunar eclipse.

DO: Keep An Open Mind

Anything is possible under an eclipse, as they bring about unexpected twists and turns in our lives. With a full moon/lunar eclipse combo like this one, it's likely that we'll gain some sort of "illumination" on a situation that we previously couldn't see from a wider perspective — so it's important to keep an open mind and stay malleable when it comes to our outlook. "Eclipses often bring hidden information to light, and you could have an ‘ah ha' moment," Hale says. Be willing to change your mind and your course as you discover new pieces in your life's puzzle.

DON'T: Give Into The Emotional Fireworks

Full moons can mean big feelings — and with Cancer season 2020 in full force on top of it, it's more than likely that we're in an extra sensitive state. "Emotions are amping up at the time of the eclipse, which can make us emotionally reactive if we are not careful," Hale says. "For better or worse, emotions will come into focus." Be aware that you could be feeling things with more intensity than usual and proceed with caution.

Between the coronavirus pandemic and the civil uprising taking place in the U.S. right now, that which is political is also personal, and many of us are questioning the way things are being handled by those in positions of power. It's a good time to keep your antennae perked and try to think more independently — both when it comes to the way our society runs and how our personal lives run. "This Capricorn eclipse will direct our focus to our personal structures or foundations, the status quo, and authority issues," Hale says. Don't just go along with things because they're traditional or because everyone else is doing it — embrace your inner authority and think for yourself.

DON'T: Try To Hold Onto Things That Aren't Serving You

Eclipses shake things up — and lunar eclipses especially can bring things to a sudden conclusion. When this happens, try not to cling onto things in your life that have met their expiration date. Let go of toxic relationships and ways of thinking. "This eclipse can bring endings, but this should not be feared — as anything that ends has been on its way out for a while now," Hale says. Don't fight the cosmic wave that'll wash over our lives this weekend. If something changes or ends, try to make peace with it rather than fighting it, as it's likely for the best.

DO: Be Extra Cautious — Physically & Emotionally

Aggressive planet Mars and currently-retrograding Mercury will be on their way to forming a tense square aspect alongside the full moon eclipse, which could make us feel extra on-edge and cause tempers to flare. "We could experience agitation at this time, and during the days following the eclipse, there is a strong chance of volatility or even violence," Hale says. "Use care and caution and be aware of your surroundings and state of mind." Go out of your way to stay calm, and do you best not to push anyone else's buttons either, as we'll all be feeling a little more explosive.

Eclipses aren't the most stable cosmic periods, and this one in particular could shake things up when it comes to money — so during the full moon and the days following it, play it safe when it comes to balancing your wallet. "Financial markets could be affected, and the days after the eclipse look volatile in the U.S.," Hale says. Plus, with Mercury retrograde still raging on through July 12 and making financial decisions unclear and confusing, hold off any major investments or money moves until mid-month.