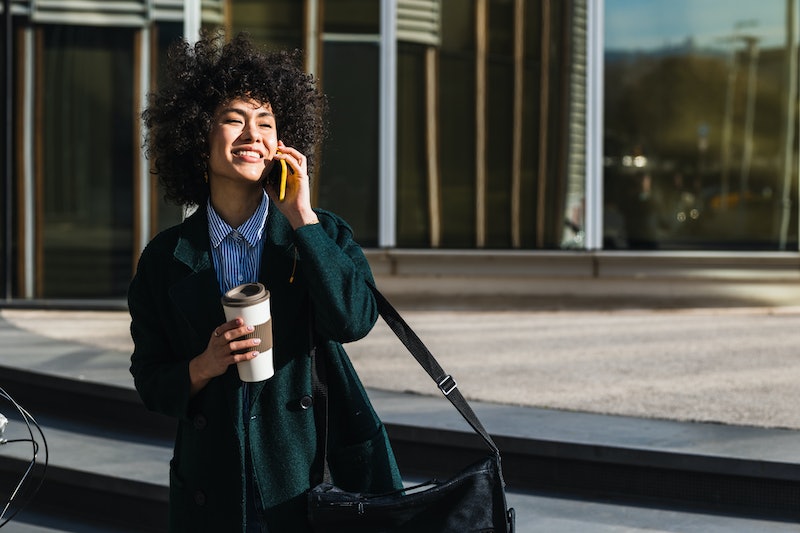 Imagine you look at the clock at 8:08 for what feels like the millionth time this week. Later, your total at the drugstore is exactly $8.08. Then you get a call from a random number and notice the 808 area code. It’s uncanny, yes, but what does it mean? Seeing the same set of numbers over and over again can often feel like more than a coincidence, which is why these omnipresent digits are sometimes called “angel numbers.” This mystical moniker can refer to any number that seems to show up frequently in someone’s life, and it’s believed that the meaning behind angel numbers like 808 may carry spiritual messages from beyond.

Originally, the meanings of angel numbers were purported to be channeled by psychics directly from angelic beings. However, you can also use the practice of numerology to make sense of their meanings. In numerology, the number eight represents luck, success, and manifestation, while zero is associated with infinite potential. If you repeatedly see the angel number 808 or other combinations of these numerals, consider it a cosmic reminder of your limitless ability to create opportunities, find good fortune, and embrace abundance.

“The theory is that repeating numbers show up in our lives when we are being guided by the universe, spirit, or our ancestors,” numerologist Jasmine Wolfe tells Bustle. “The number 808 may have a unique message for you — however, numbers have always had symbolic meanings across cultures, so understanding the numerology behind 808 can add more depth.”

If 808 is your angel number du jour, read on for the spiritual and numerological interpretation of this special sequence.

The Spiritual Meaning Of Angel Number 808

A good place to start when interpreting angel number 808 is to look to the spiritual meanings of the individual digits that comprise it, which in this case are eight and zero. “Eight is the number of manifestation, so the number 808 is a powerful indicator that you are more in control of your life than you realize,” Wolfe says. Eight is one of the luckiest numbers in numerology, and it’s associated with themes like prosperity, wealth, and ambition — so seeing 808 is a beautiful reminder of your ability to take charge and manifest success.

If you look at the number eight, you’ll notice that it looks like an upright infinity symbol — so it’s also a sign of the infinite possibilities that lay before you. This theme is echoed by the presence of the zero in the number 808, as zero is symbolic of unlimited potential and provides open space for creation. Wedged between two lucky eights, this universal power is made even more potent. In that sense, the energy of angel number 808 is like a playground for your greatest and most miraculous manifestations.

“Since the number eight is repeating in the number 808, the overall message has to do with energy and reciprocity,” Wolfe says. “Any number with a zero in it is imbued with luck and protection since zero represents [the] spirit.” In this sense, angel number 808 can be an auspicious sign to trust in your power to create success and connect with the law of attraction.

The Numerological Meaning Of Angel Number 808

If you want an even deeper numerological take on the angel number 808, there are some other ways to interpret it, too. In most branches of numerology, it’s customary to reduce multi-digit numbers down to a one or occasionally two-digit number through addition. “When it comes to interpreting number messages such as 808, it’s important to look at the number as a whole,” Wolfe says. “[However,] it’s worth considering that 8+8=16, which is a number that warns us of an imminent rude awakening.” With that in mind, one might take the numerological meaning of 808 as a cautionary signal from the universe that some intense changes lie ahead. Like the Tower card in tarot, these sudden shifts can also bring the most rapid growth, helping you to let go of what’s no longer working in your life.

If you reduce the sum of 8+0+8 to a single-digit number, you end up with seven, which is symbolic of wisdom, depth, and the spiritual quest to find truth. The number seven is also very solitary, and it highlights the importance of trusting in yourself and exploring things independently rather than looking to others for answers. With angel number 808 on your side, know that it’s time to make your own magic.

While angel number 808 can be seen as a powerful omen when it comes to manifestation and personal growth, you can also apply its meaning to love and relationships. Because eights and zeroes vibrate with the energy of unlimited potential and prosperity, angel number 808 can be seen as a sign to level up your standards and trust in the universe’s ability to bring you a partnership that’s more aligned with your desires. “It’s a reminder to protect your energy and cut ties with anything that is doing more harm than good,” Wolfe says. If you lower your vibration to match a relationship or romantic situation that isn’t serving your highest self, then you’ll hold yourself back from exploring the limitless and yet-to-be-discovered opportunities that lie beyond it.

“If 808 keeps appearing for you, you should slow down and check in with yourself about where you are focusing your time and energy,” Wolfe says. “It might be an indicator that you’re giving too much energy away without getting it back in return.” The manifestation-oriented meaning of angel number 808 wants to ensure that you’re an energetic match for whatever you’re looking to draw into your life, so focus on the things you want to attract and stop pouring yourself into people, relationships, or situations that aren’t reciprocating your efforts.

Spiritually and numerologically, there are many different ways to interpret the meaning of angel number 808. If you see these digits often, here are a few ways to align with the energy and make sense of its symbolism.

Angel number 808 is supercharged with the energy of prosperity and good fortune — making it the perfect cosmic reminder of your ability to manifest your dreams. If you’re seeing angel number 808, set aside some time to focus clearly on your goals and visualize your success. Explore different ways of manifesting, such as by using the law of assumption or the viral 369 method.

Honor Your Needs & Trust Yourself

“Seeing 808 is a reminder to care for and protect yourself,” Wolfe says. Because the numerological meaning of this number can correspond with sudden awakenings and a spiritual search for truth, it’s important to prioritize your energetic protection and stand tall in your power. Stop second-guessing yourself or putting other people’s desires before your own.

Make Your Own Interpretations

Numerology offers a helpful base for exploring the meaning of an angel number, but that doesn’t mean you should discount your own intuition or experience of a number’s energy. “Keep in mind that your own personal relationship with a number is paramount,” Wolfe says. “So if 808 reminds you of Hawaii or drums, you might interpret the message differently.” Pay attention to where you are, what you’re doing, and how you’re feeling when this number shows up, as this context may offer additional insights into the mystical messages you’re meant to receive.