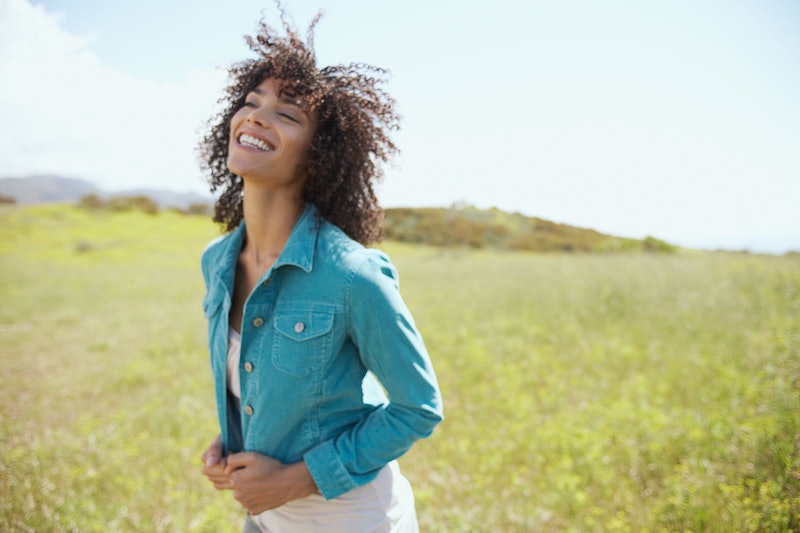 On April 11, we’re kicking off a new cycle in the stars with the rise of the April 2021 new moon. This powerful lunar reset offers all zodiac signs a chance to channel their inner leader. Because it’s the first new moon of the spring season and the astrological new year, we have a doubly strong opportunity to kick off our plans with a bang. Take note of some basic April 2021 new moon do’s and don’ts so you can wield this fiery cosmic magic in your favor.

This is the big new moon of Aries season 2021 — and because Aries is the cardinal fire sign of the zodiac, this lunation asks us to fearlessly charge toward our desires. Right now, impulsively taking action on things will be more effective than overthinking or waiting for the right moment.

Aries is one of the most high-energy signs of the zodiac, so it’s no surprise that this new moon is staying busy by connecting with nearly every other planet in the solar system. The new moon will be aligning in Aries with the sun, Venus, and Mercury, so there’s a whole lot of fire sign energy lighting up our hearts, minds, and spirits. Power-hungry planet Pluto is also forming a square aspect to the new moon, which poses some challenges and injects some intensity. But thankfully, the new moon also harmonizes with ambitious planet Mars and fortune-filled Jupiter, which brings all zodiac signs just as much luck as it does motivation.

Ready to light up your new moon intentions? Here’s your guide to the April 2021 new moon so you know what to do.

DO: Take A Risk & Try Something New

New moons in astrology are all about new beginnings, but this one is extra special because it’s the first new moon of the spring season and the astrological year. That said, now’s a great time to embark on a totally new path. Call on the warrior-like energy of Aries to help you charge forward into unknown territory. Plus, a harmonious sextile aspect between the moon and fortune-filled planet Jupiter will guarantee that good luck is on your side, so don’t be afraid to take a chance.

DON’T: Be Shy About What You Want

Aries is the first sign of the zodiac and it’s associated with the house of ego and self, which means it’s time to get a little selfish and do your own thing. What do you truly want in your life if there were no limits on your energy, time, or resources? Answer that question honestly and commit to manifesting it — because under this new moon, there’s no such thing as “too much,” and there’s no taking no for an answer. The squeaky wheels usually get the grease, and this new moon reminds us that we’re our own most powerful ally.

DO: Plan A Candle Ritual To Honor The Fire Sign Energy

Aries is a fire sign, so this new moon is an ideal time to work with fire energy and create a special ritual to honor your intentions. One easy way to work with the element of fire is by performing a new moon candle ritual. You can find elaborate rituals online if you feel like being extra, or you can simply write down a list of intentions and say them aloud as you light a candle on the night of the new moon. Simply clarifying what you want to manifest and combining it with the power of a burning flame can be a powerful symbol that puts you more deeply in touch with your passions.

DON’T: Worry About Other People’s Expectations

During March’s full moon in Libra, there was a lot of emphasis on relationship dynamics and our roles within partnerships. But the zodiac wheel has turned, and this moon’s energy is all about you. Get in touch with your most authentic desires, wants, and goals — embrace the things that light your fire. Don’t worry about appeasing everyone around you or doing things based on other people’s expectations. Under this new moon in independent Aries, the only person you should answer to is yourself.

DO: Use The Moon’s Momentum To Make Big Moves

This new moon is forming a positive sextile aspect with action planet Mars, which is blessing all zodiac signs with bursts of motivation and physical energy. Summon up as much bravery as you can and don’t be afraid to be impulsive, as you’ll want to capitalize on this vibe. There’s no need to be timid when it comes to diving toward your desires now — charge forward with a take-no-prisoners attitude and start something amazing.

DON’T: Get Overly Competitive About Reaching Your Goals

This confidence-building new moon will make us feel fearless, motivated, and energized about conquering our goals — but that doesn’t mean we need to trample over other people in the process. A tense square aspect between the moon and power-hungry Pluto could throw some obstacles in our path or make us feel a little cutthroat about getting to the top. Don’t let all this fiery Aries energy cause you to blow your lid if a challenge arises. Instead of getting overly intense about winning or crushing the competition, focus on your own path and celebrate your successes as they come.