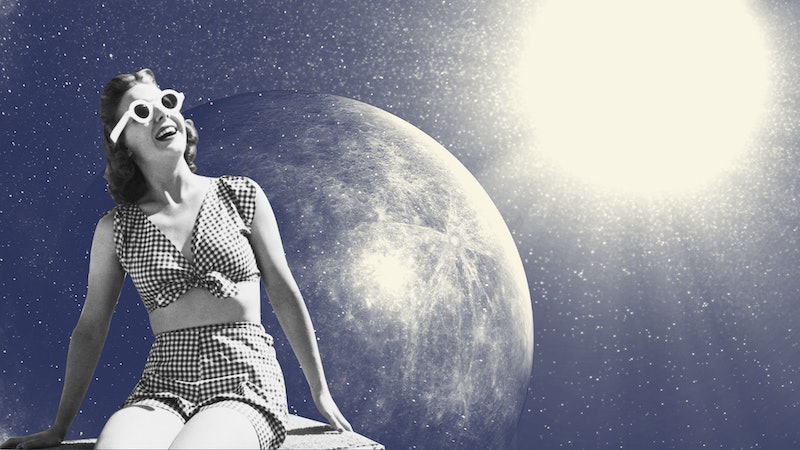 The period of time between now and Election Day is bound to be chaotic — and not just because of the news cycle. There's also a ton going on astrologically that will affect us both personally and collectively. The intense and rare astrology of 2020 has been discussed for years, and it feels significant that we're entering such a tumultuous cosmic period during the lead-up to the election.

October is bookended by a rare double full moon — one on the first and last day of the month — including the powerful Halloween blue full moon that occurs just days before the election. This month also delivers us the year's final Mercury retrograde period, as well as some frustrating and volatile planetary aspects involving the sun, Mars retrograde, and the planets in the Capricorn stellium (which are Jupiter, Saturn, and Pluto).

While the planets in astrology can influence the energy around us, but then again, so can a lot of things. It doesn't have to make- or-break a situation, so don't feel doomed or cursed by any of the more difficult aspects or transits that are on the astrological agenda leading up to election day. You can use this cosmic awareness to empower yourself, stay conscious of some of the collective planetary energies playing into the social landscape of 2020, and do your best to avoid any astrology-related drama.

Here are some of the major astrological events taking place through the coming month that should be on your radar.

Mid-October: When The Madness Begins

October kicks off with a healing full Harvest moon 2020, but then, things start getting turbulent mid-month thanks to some retrograde activity and planetary dramas. "October is going to be a chaotic month, particularly the 13 through the 16" astrologer Lisa Stardust tells Bustle. That's because in addition to Mercury retrograde and the powerful October 2020 new moon in Libra on October 16, there will also be several hard aspects between some of the most influential planets that will make us feel combative, disagreeable, and frustrated all week long.

These planetary aspects can trigger fear-mongering in general, so people should look out for it. "We’ll be dealing with a cardinal T-square, which is a fraught aspect between the Libra planets, the Capricorn stellium (Jupiter, Saturn, and Pluto) — and Mars retrograde in Aries will activate the point too," Stardust says. "What this means is that we’ll be wanting to make moves [toward] attaining our desires, which may be harder to do than we thought due to Mars’ retrograde." Expect to witness collective ego clashes and heated arguments. This week is when the cosmic energy starts to get tense.

We've been in the thick of Mars retrograde 2020 since Sept. 9. And this transit, which only happens once every two years, has major implications timing-wise, given that its involved in so many intense planetary aspects, overlaps with the equally-stressful Mercury retrograde fall 2020, and also fully envelops the November election. Mars retrograde can make us feel sluggish, unmotivated, and unable take tangible actions on things — which is not the most inspiring vibe leading into an election. Getting rest and making time to release pent-up energy in healthy ways will be important to clear your head.

This Mars retrograde period, as well as its journey post-retrograde, will also have implications after the election, given that it'll still be in its retrograde shadow until Nov. 20. "Mars retrograde will probably lead to protests — which may be ongoing for the next five months," Stardust says. This transit can bring repressed rage bubbling up to the surface in general, and we'll struggle to find healthy ways to release it. Regardless of the outcome of the election, the stars point to there being a public pushback.

The year's final Mercury retrograde period will be in full swing during the three weeks leading up to the election. "Mercury’s backwards march in Scorpio commences on October 13 and lasts until November 3," Stardust says. "This means that there'll be a lot of uncertainty about the political future of the country." Mercury rules over logistical matters of all sorts, so during this retrograde, as well as the post-retrograde shadow period that begins on election day, it could have influence.

"There will be confusion and issues with voting," says Stardust of this retrograde. "We can expect to not know who the next president is right away or that there will be a recount." This comes as no surprise, as there's already been talk about a possible contested election result, the legal drama of a potential recount, and unfounded fear of voter fraud, which Trump has falsely conflated with mail-in voting. As is true of any Mercury retrograde, be sure to triple-check your information sources before sharing them, take extra care to communicate clearly, and pay attention to any major deadlines over the coming weeks.

The month wraps up with the second October 2020 full moon, which takes place in the sign of Taurus. This luminary is aligning with Uranus, the planet of sudden change, and has the potential to expose some deep feelings, cause some unexpected shifts, and push everyone out of their comfort zone. And between the detective-like paranoia of Mercury retrograde in Scorpio and the erratic nature of the Uranus/full moon conjunction, we might see some secrets revealed on a large scale, too. "The rare full blue moon in Taurus on Halloween will bring truths to life — so be aware and pay attention," Stardust says. This could be a tense time both personally and collectively, as we'll likely be faced with unexpected revelations and shake-ups.

Finally, we've got the astrology of election day itself, which points to more potential confusion and discord — but perhaps a glimpse into the future, too. "The day of the election, the moon will be in Gemini on the North Node and squaring Neptune," Stardust says. "This means that there may be last-minute scandals that come out — which are fated." When the moon aligns with the North Node (which represents fate, destiny, and the future), we're better able to tap into our intuition about the future, and the events surrounding this alignment could offer us a peek into what's to come down the road, for better or worse.

The moon's placement in relation to Neptune on election day could put us in an emotional haze, making it hard to discern fact from fantasy. We might see this play out on a larger-scale in the form of unclear information or misleading reports coming forth about election results or voting information on the day-of. But because the moon will be in intellectual air sign Gemini, we'll be feeling naturally inquisitive, curious, and ready to question things — which could help us think more critically in the midst of so much turbulence.

More like this
When Is The Next Full Moon? Your 2022 Calendar
By Nina Kahn and Brittany Beringer
Here’s Your Daily Horoscope For January 31, 2023
By Mecca Woods
These 3 Signs Are The Master Chefs Of The Zodiac
By Kristine Fellizar
Here’s Your Astrological Forecast For February
By Nina Kahn
Get Even More From Bustle — Sign Up For The Newsletter
From hair trends to relationship advice, our daily newsletter has everything you need to sound like a person who’s on TikTok, even if you aren’t.