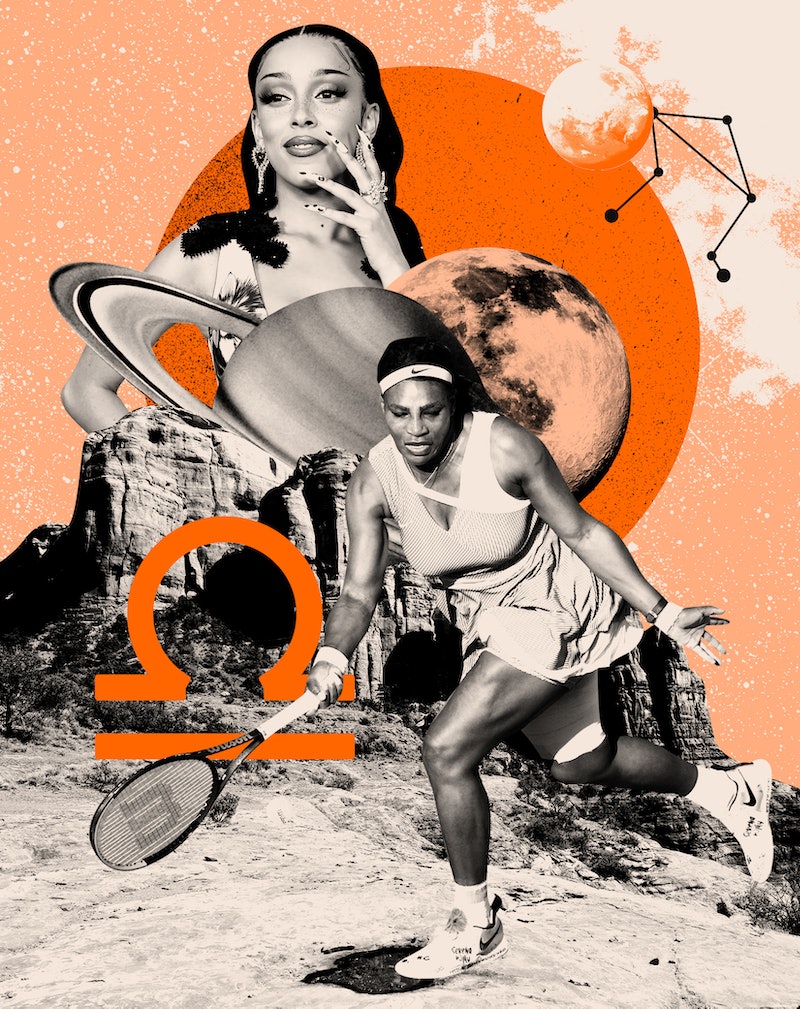 Sharing a zodiac sign with someone doesn’t automatically make you two peas in a planetary pod. In fact, some people feel like September Libras and October Libras may as well exist on two opposite ends of a balancing scale. Everyone’s cosmic profile is unique, of course, and the placement of our personal planets will vary based on the day, year, and even moment that we’re born. But do the apparent differences between September Libras and October Libras have an actual astrological basis? Yes, but the answer is complicated.

From an astrologer’s perspective, it makes total sense that people with the same zodiac sign could still have very different personalities, as our sun signs are only the tip of the iceberg when it comes to the vast landscape of our birth charts. So while almost everyone born between September 23 and October 22 is a Libra, they might have a totally different zodiacal line-up when it comes to their moon, Mercury, Venus, Mars, and rising signs. All Libras share some core Libra qualities, but depending on their exact date of birthdate, there can be a big variation in the way they express themselves, process emotions, approach their relationships, and move on their goals.

But there’s another factor that can set September Libras apart from October Libras — as each zodiac sign is divided into three subdivisions called decans. These traditional astrological groupings can change the way a sign’s energy manifests, and you can find yours by looking up the degree of your sun sign. Each sign takes up exactly 30 degrees on the zodiac wheel, so the first 10 degrees of a sign make up the first decan, the second 10 degrees are the second decan, and the final 10 degrees are the third decan. Because the sun travels approximately one degree per day during each astrological season, that means that all September Libras are first decan Libras, while most October Libras (with the exception of those born during the first few days of the month) fall under either the second or third decan.

Let’s examine some of the differences between September Libras and October Libras through the lens of decans, as this concept can offer a more complex and personalized look at the zodiac’s resident cardinal air sign.

Libras are the sign ruled by Venus, the planet of love, romance, and beauty — and September Libras (aka first decan Libras) are solely ruled by this planet’s influence. But Libras born in October are usually second or third decan Libras, which means they have a secondary planet influencing the way their Libra zodiac energy is expressed. Because all September-born Libras are purely Venus-ruled, they tend to embody the most textbook Libra traits and come off as more stereotypical of the sign’s most well-known qualities — such as being romantic, diplomatic, charming, and seeking balance in all things.

As one of the mentally-driven air signs of the zodiac, Libras are naturally conceptual people. But because most October Libras are born in the sign’s second or third decan (which are co-ruled by either innovative planet Uranus or intellectual planet Mercury), they have a tendency to have a more logical and objective approach to life. October Libras are driven by thoughts rather than feelings, and they excel at coming up with creative ideas — but this also means they might spend hours weighing the pros and cons of things when making a decision. Classic Libran indecisiveness!

The sign of Libra is represented by the symbol of the scales — which reflects their general desire to find balance in all situations. But no one’s in pursuit of harmonious vibes quite like a September Libra. As first decan Libras who are arguably blessed with the strongest amount of Venus’ symmetry-loving beauty, these charming and diplomatic people often take on the role as the peacemaker. They’re great mediators in disagreements, as they can help people find common ground.

As cardinal air signs, Libras are gifted when it comes to initiating social connections and thoughtfully bringing relationships together. But for third decan Libras who are co-ruled by communicative planet Mercury (all of whom are born in mid October), being social and interacting with the world around them is even more important. These October Libras are extra tactful and eloquent in the expression of their ideas, and they can carry on a meaningful conversation with just about anyone — even if they have totally different views.

Libra is the sign of partnerships, so exploring the dynamics of one-on-one interpersonal connections is an important part of life for anyone born under this sign. But because September Libras are purely ruled by love planet Venus, they’re arguably the most romantic and relationship-oriented of the bunch. Libras love to flirt, but September Libras come alive when they can bask in the glow of a relationship and form a deep interpersonal bond with a partner.

6. October Libras Are Passionate About Justice

Libras are more than just social butterflies — they’re also deeply invested in making sure that things are fair and equitable. And because second decan Libras (all of whom are born in early October) have community-oriented Uranus as an additional planetary influence, they tend to be even more passionate about social issues and standing up against injustices. These October Libras tend to be more willing to go against the grain and rebel against the status quo than their September-born counterparts, especially if it means bringing a better balance to a situation.