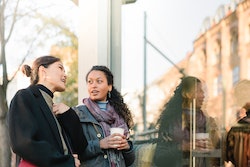 Being born during the first or final days of an astrological season doesn’t actually give you a blend of both zodiac sign’s qualities, according to astrology. That’s because planets can only be in a single sign at once — so even if your birthday falls on the last day of Capricorn season, your sun sign is still Capricorn, not a Capricorn-Aquarius hybrid.

While cusp signs are an astrological myth, it’s still totally possible that someone born near the Capricorn-Aquarius cusp would identify with the energy of both signs — but it’s not actually because of their birthday’s proximity to the sun’s sign shift. It’s much more likely explained by the fact that personality-influencing planets like Mercury and Venus generally travel close to the sun in the zodiac. So if you're an Aquarius, it’s probable that you’ll have some important personal planets in Capricorn, and vice versa. Having Capricorn and Aquarius highly activated in a birth chart can give someone a blend of qualities from both signs regardless of when their birthday falls, so understanding Capricorn-Aquarius cusp traits can be important whether you were born on the cusp or not.

Capricorn season, which begins on the date of the winter solstice, helps us to buckle down and focus on our tangible goals throughout the darkest part of the winter season. But once the sun ingresses into airy Aquarius and the days start getting a little bit longer, our focus begins to shift outward, encouraging us to foster a greater sense of community and build toward a sunnier future in collaboration with others. The zodiac tells a story, and each sign’s energy builds upon the meaning of the one before — so when the sun journeys through the so-called Capricorn-Aquarius cusp each year, all signs have an opportunity to connect with its transitional vibe.

While it’s true that being a cusp sign isn’t a real concept in astrology, you can still have lots of combined Capricorn and Aquarius zodiac energy present in your chart. Plus, understanding the overarching Capricorn-Aquarius cusp traits can be useful for everyone as the sun transitions from one sign to the next each winter.

Both Capricorn and Aquarius are ruled by stern and serious planet Saturn in traditional astrology — and this is notable, given that they’re the only two neighboring zodiac signs who share a traditional cosmic ruler. This gives people with Capricorn-Aquarius cusp energy a heavy Saturnian influence. They tend to be especially disciplined, responsible, and dedicated to working hard toward their goals.

Capricorn-Aquarius Cusps Are Focused On Their Future

Aquarius is known as the most futuristic of all the zodiac signs, while traditional Capricorn tends to be more skeptical about embracing new methods. However, both signs are deeply invested in creating a solid future for themselves. Capricorn’s cardinal sign energy is focused on building a foundation for their goals, and Aquarius’ fixed sign energy looks ahead to bring vision and innovation to these tangible plans. With Saturn — the planet of time — serving as both signs’ traditional ruler, it makes sense that the cosmic combination would be focused on their futures.

Hardworking Capricorn is the sign associated with the tenth house of the zodiac, which is all about our career ambitions. Aquarius, on the other hand, corresponds with the eleventh house of communities and groups. When we blend these energies together, there’s a strong sense of success that’s found in collaborating with other people. People with heavy Capricorn and Aquarius placements are usually team-oriented, able to communicate effectively with their colleagues, and enjoy bouncing ideas off of others in a group setting.

Capricorn-Aquarius Cusps Know How To Network

What do you get when you combine Capricorn’s work-focused earth sign vibe with Aquarius’ airy social skills? A very talented networker, that’s what! People with Capricorn-Aquarius cusp energy excel at building new professional and creative connections and tend to attract like-minded collaborators. They always know who to call for a job hookup or a letter of recommendation, and they’re great at initiating mutually-beneficial relationships between others, too.

Being dependable and pragmatic is a way of life for earth signs like Capricorn, which is why they’re so great at giving sound advice. And while Aquarius energy might be a little less conventional, this friendship-oriented sign is still super dedicated to being supportive of their squad. The overlap of these cosmic energies makes Capricorn-Aquarius cusps highly reliable friends who will always be there as a voice of reason and a source of reassurance for the people close to them.