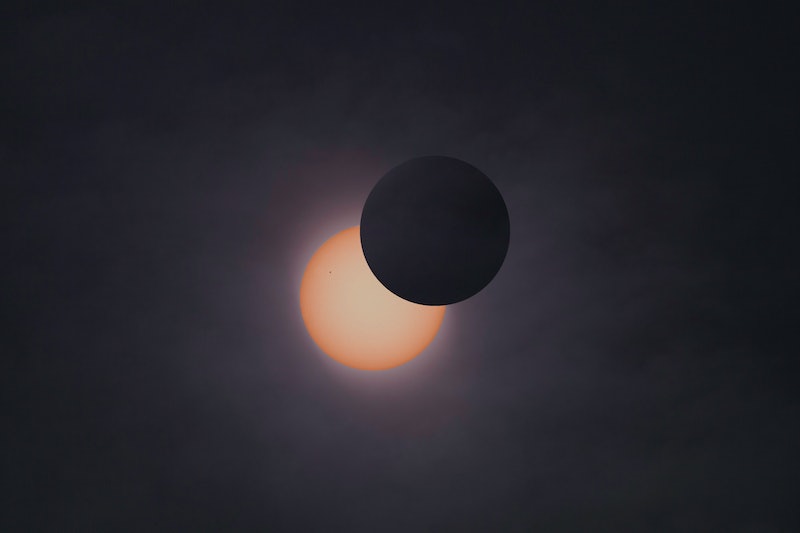 Doing moon rituals that align with the major moments of the monthly lunar cycle is a beautiful way to connect with astrology and create a regular spiritual practice. New moons are great for intention-setting and manifestation rituals, while full moons are a prime time for charging crystals and doing cleansing rituals. But if you follow a lot of astrologers on social media, then you may have come across some posts or videos advising against doing your usual moon rituals or manifestation practices during either a solar or lunar eclipse. While eclipses can be powerful harbingers of spiritual growth and big life changes, they’re actually not the best time for doing moon magic.

In astrology, eclipses are known for creating the potential for swift shifts and intense growth spurts. These cosmic events are often marked by shocking revelations, sudden endings, and exciting new beginnings that help to realign us with our true calling — albeit sometimes in surprising ways. Because eclipses are basically just supercharged new and full moons, one might think that they’re free game for crystal charging, moon manifestations, and other lunar rituals — but that’s not the case.

The vibe of eclipse season can be chaotic, intense, and often challenging, as we experience many realignments and revelations in a short amount of time. That kind of powerful and destabilizing energy is not what you want to invite into your manifestation rituals or charge your crystals with. Instead, eclipses are much better for sitting back, processing the shifts, and allowing the universe to do its thing without trying to intervene.

New and full moons are great for all sorts of witchy rituals, but according to many astrologers (including myself), eclipses are the exception. Not every spiritual practitioner agrees with this, of course, but there’s lots of astrological evidence that can explain why eclipse season rituals aren’t the best use of your energy.

There are a few reasons why eclipse manifestations and eclipse rituals are a bad idea. The first has to do with the position of the luminaries (the sun and moon) themselves. During an eclipse, the sun, moon, and earth align in such a way that the light of the sun and/or the moon becomes obstructed. This is why, depending on where you are in the world, eclipses can be so visually dramatic. But astrologically, this actually compromises the power of the luminaries, making it an inauspicious time to call on their energy in a ritual (as we would during a new or full moon ritual). When the luminaries are caught in each other’s eclipse shadow, they’re unable to function as they normally would, and thus the overall cosmic energy is much more fraught and intense — so you’ll want to avoid charging your crystals or trying to manifest during these periods.

Secondly, eclipses always align with the two significant astrological points known as Nodes of Fate (which are located on the ecliptic and relate to fate), and this influence tinges these lunations with an element of karmic magic that is believed to relate to our destinies. Whatever events or changes of heart that unfold during eclipse season are probably meant to be — meaning they would have happened anyway, but the power of the eclipses sped up the process. It’s like the universe’s way of intervening in our lives and putting us back on the path that’s meant for us. So by attempting to do your own manifestation rituals during an eclipse, you might be distracting yourself from or closing yourself off to the exciting blessings, realizations, and life lessons that the eclipses are trying to offer.

What Spiritual Practices Can You Do During Eclipses?

While manifestation and moon rituals are off the table for eclipse season, these cosmic events are still spiritually powerful periods. Because eclipses help us to align with our fates, anything we can do to connect with our spiritual side (sans ritual work) is helpful. So instead of trying to set specific intentions or charge your crystals in the moonlight, try doing high-minded activities that promote self-reflection and growth. Taking up a journaling practice or making daily gratitude lists can be helpful during eclipse season, as this can help you stay present and process the eclipse-induced events taking place in your life. Eclipses are also great excuses to gather with your closest coven of friends to have some heart-to-hearts and talk through any major changes that you’re experiencing. Doing an eclipse tarot spread is also a great way to seek some guidance from your inner self and get clarity in your feelings.

Eclipses are also great for any spiritual activities that help you stay grounded, calm, and in touch with yourself amidst the cosmic chaos. Meditating, taking long walks, spending time in nature, or working with stress-relieving crystals are all wonderful ways to keep your chill and make the most of the sometimes-destabilizing eclipse energy.