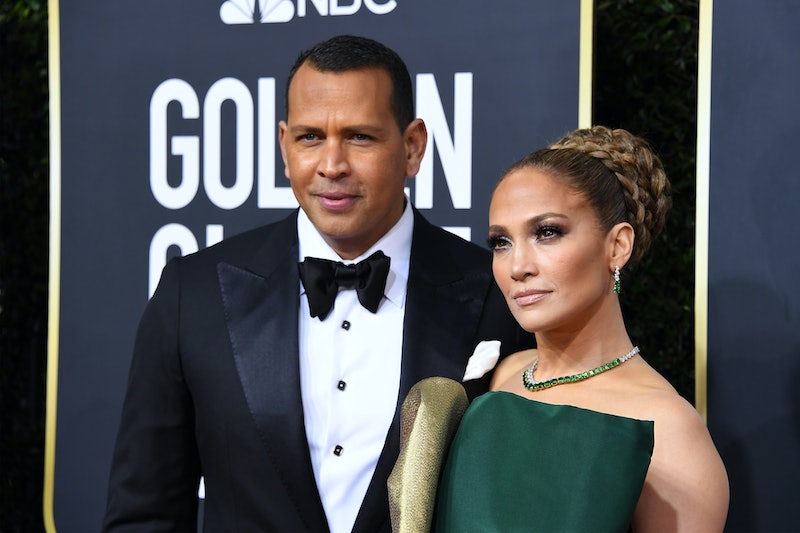 The star-studded love story of Jennifer Lopez and Alex Rodriguez’ relationship has been grabbing headlines ever since its inception. Since becoming a couple in 2017 and getting engaged in 2019, these two have merged their families together and publicly gushed over their love for one another. Up until now, their relationship timeline has been mostly drama-free. But amidst multiple wedding delays, whispers of infidelity, a rumored breakup, and then reports they were “working through some things,” you may be wondering about what J.Lo and A.Rod’s astrology says about their future.

Naturally, as an astrologer, I was curious about what the planets could tell us — so I did some sleuthing to see what J.Lo and A.Rod’s astrological profiles say about their relationship compatibility. Lopez and Rodriguez’s exact birth times are unknown, which means we can’t confirm their rising signs or see which houses in their birth charts each planet falls into. But, we're still able to take a thorough dive into most of their planetary placements by using accurate birth dates and locations, as well as examine the key relationships between the planets that work together to create their cosmic compatibility. Here’s what the stars have to say about these two Leos.

Lopez (born July 24, 1969) and Rodriguez (born July 27, 1975) are both Leo sun signs. Additionally, their suns are only a few degrees apart in the zodiac, meaning that when we combine their birth charts, the two luminaries form a powerful conjunction aspect. Leo zodiac signs are known for being gregarious, warm-hearted, flashy, and a little dramatic — which is part of what makes this duo such an attention-grabbing powerhouse.

But J-Rod’s intense sun sign alignment also speaks to a deep sense of understanding and compatibility between the couple on a soul level. They inherently relate to each other’s desires, drive, and authenticity. Rodriguez shared that he and Lopez are “very much twins” in a 2017 interview with Vanity Fair. He stated, “We’re both Leos; we’re both from New York; we’re both Latino and about 20 other things.” Lopez echoed this sentiment, adding “I understand him in a way that I don’t think anyone else could, and he understands me in a way that no one else could ever.” Perhaps this is a testament to their spirited sun/sun conjunction.

While Lopez and Rodriguez’s sun/sun connection gives them a deep core understanding of each other, this Leonian combo can also suggest some drama. Leo is the singular zodiac sign ruled by the sun, which is the center of our solar system and one of astrology’s most important players. The sun is the only planet in astrology that’s also a star — and just like stars, Leos love to shine and steal the show. That said, they both may need to work on sharing the spotlight within their relationship.

But in order to see how they think through and express their struggles to one another, we’ll have to look to their Mercury zodiac signs, which rule communication. Lopez’s Mercury is cozied up to her sun in passionate fire sign Leo, which indicates that she’s flamboyant and dramatic in her self-expression. But Rodriguez’s Mercury is in emotional water sign Cancer, which means he’s more sensitive and gentle in his communicative approach. Fire and water signs generally clash, so this aspect could easily portend misunderstandings and hurt feelings. But, because Lopez’s Leo Mercury aligns beautifully with Rodriguez’s Leo sun, they’ll likely be able to clear up communication issues as they arise and find common ground.

Is The Relationship Built To Last?

Lopez and Rodriguez’s astrology charts point to an enduring connection that’ll allow them to overcome any obstacles. Perhaps the most significant is J.Lo and A.Rod’s strong Venus/Saturn trine aspect, which indicates longevity in a romantic relationship. Saturn is the planet of hard work and commitment, while Venus is the planet of love and romance. Having such a harmonious connection between the two in their charts illustrates a dedicated and stable partnership that’s built to withstand the test of time.

Another highly auspicious piece of synastry within the couple’s charts is a sparks-filled sun/Mars trine aspect, which speaks to a steamy and long-lasting physical attraction between them. Mars is the planet of passion, sex, and action, so it’s an important one to consider when it comes to relationship compatibility. And because Mars also rules our ambitiousness, this alignment shows that these two excel at supporting each other’s goals, which is a great testimony for a long-term relationship. Both Lopez and Rodriguez are likely to feel free to pursue their dreams independently, but will also be successful in conquering shared goals and working as a team.

Seeing lots of notable cosmic connections between Lopez and Rodriguez’s charts tells me that this couple has what it takes to work through relationship hurdles and come out stronger for it. No partnership is exempt from challenges, least of all one that’s as widely publicized as J. Lo and A. Rod’s. But according to astrology, this Leo duo knows how to share the limelight, deal with drama, and shine side by side. So when they shrug off break-up rumors and say they’re “working through some things,” I’m inclined to believe them — because the compatibility between their birth charts shows their love is likely built to last.

More like this
Why Harry Styles & Olivia Wilde Make A Great Couple, According To Astrology
By Nina Kahn
Think Your Partner Is Cheating? These Tarot Cards May Confirm Your Suspicions
By Kristine Fellizar
This Tarot Card Means It's Time To Reach Your Magical Potential
By Brittany Beringer
Your Horoscope For October 2022
By Alexandria Lettman
Get Even More From Bustle — Sign Up For The Newsletter