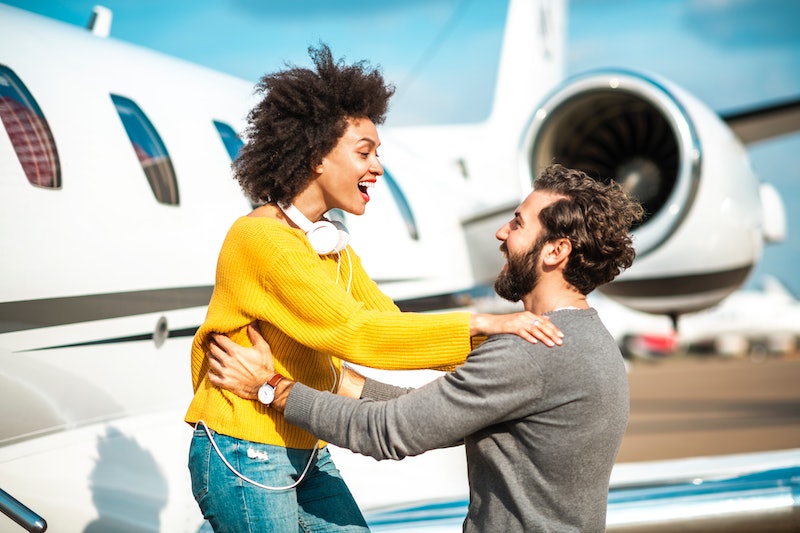 When two of the biggest pleasure-seekers in the zodiac get together, expect a romance filled with fancy dinners, luxe weekend getaways, and hot passionate nights in bed. Taurus and Leo are a couple that anyone would be envious of. But of course, money isn’t everything. When you have two fixed signs in a very set relationship in their ways, they’re born to butt heads at some point. Taurus and Leo’s zodiac compatibility has all the info on what you need to know about this fabulous earth and fire sign pair.

“Taurus and Leo make great business partners as they are driven and will focus on different areas to thrive,” astrologer Arriana Fox tells Bustle. “But at home and in love, this can bring some upsetting challenges that make this a hard match to live and love together.”

For one, the bull is an Earth sign who approaches life slowly and steadily. By nature, Taurus is quiet, giving, but also very stubborn. On the other hand, Leo is the zodiac’s fiery lion who’s outgoing, loves being the center of attention, and enjoys being in control. They’re also ruled by the Sun, who deals with the ego and the self. If Leo’s needs clash with their partner’s needs, there is a tendency for them to put themselves first.

“This power struggle can bring upsets,” Fox says. “The earthy nature of the Taurus can extinguish Leo's fiery energy, which bodes poorly for a long-term commitment as Leo may find themselves losing their sense of self. A great deal of mediating between the two would be needed.”

Sexually, both signs are solid and strong-willed. When they first meet, they will be highly attracted to each other. But in typical fixed sign fashion, they like what they like and are pretty set in their ways. According to astrologer Clarisse Monahan, Taurus, being ruled by Venus, is one of the most sensual and physical signs. They tend to prefer a passive approach to physical intimacy. Leo, on the other hand, is passionate but quite spontaneous. “They’re not into the same slow game that Taurus favors,” she says. If they can’t find good middle ground, it will leave at least one partner feeling unfulfilled. In addition to that, both partners like being in charge. According to Fox, this may lead to a battle of them “one-upping each other, which could become a draining issue over time.”

Emotionally, Taurus and Leo can connect really well. Both signs place value on the idea of true love, and they genuinely want to make their partner happy. They also value loyalty and trust in relationships. However, Leo is a much more independent sign and needs someone who understands their need for autonomy and freedom. According to Monahan, that’s not something Taurus can easily comprehend. A Taurus in love will go all out for their partner and hopes their partner will do the same. With Leo, Taurus may feel like their efforts aren’t being equally reciprocated.

That leads to the biggest problem area between these two: jealousy. Taurus can be a highly possessive sign, and sharing is not an option with them. “This is the sign of personal resources, so the overriding motivation is to accumulate both positions and people,” Monahan says. Leo is very friendly and loves being around others. If Leo spends more time catering to others, Taurus will not be happy. At the same time, Taurus’ jealousy may become suffocating for the lion.

According to Monahan, Leo also needs complete adoration. “Leo’s jealousy usually springs from the desire for appreciation,” she says. “They must be number one in their partner’s life.” If their Taurus partner devotes a lot of time and effort to their career, which they have a bit of a tendency to do, Leo will be left feeling ignored.

At the end of the day, this is not the best pairing for either sign. Although their love of luxury and great sexual chemistry can bring them together, it’s going to be a challenging relationship for them both.

“This relationship will need a lot of work from both partners,” Fox says. “That can be challenging as you need them to agree on core aspects, and that’s not something easy to do with such intense personal energies.” All in all, Taurus and Leo are better off as friends or a short-term fling.