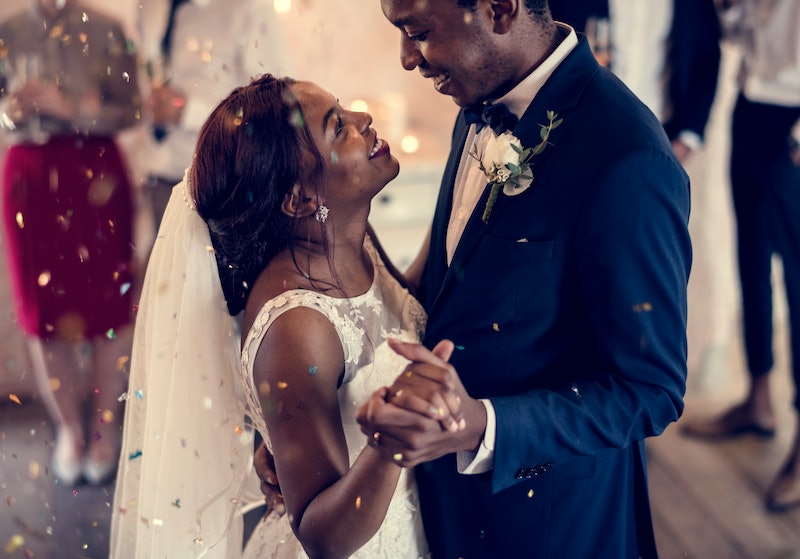 Whether you’re obsessed with planning your dream wedding or you've never spent a waking second thinking about putting a ring on it, you may still find yourself having dreams of getting married. But if visions of veils, suits, rings, tacky bridesmaid dresses, open bars, and rehearsal dinners are dancing in your head as you slumber, what is your subconscious trying to tell you? While the most obvious wedding dream meaning might indicate that you’re thinking about tying the knot, it’s not necessarily that straightforward.

It’s not surprising for someone to dream about getting married if they’re already engaged or in the process of planning a wedding. But nocturnal nuptial visions are also common among those of us who can barely commit to a hair color, let alone a contractually-bound life partner. That’s because dreams about getting married symbolize more than a simple desire to fall in love and settle down. Weddings are richly symbolic life events that hold significance in many people’s subconsciousness — whether they want to get married or not. Wedding dream meanings can reflect everything from anxieties about recent life changes to excitement about the future.

Bustle chatted with dream analyst Lauri Quinn Loewenberg, author of Dream On It, to go over the most common types of dreams about getting married and get some tips on how to decode your own.

Dreams About Weddings If You’re Actually Planning One

This is for all the brides- and grooms-to-be who are recently engaged or in the thick of wedding planning madness. With many of your waking hours being spent running through wedding deets, it makes sense that these thoughts could seep into your dreamworld, too. However, they may still hold some significance beyond the obvious — so Loewenberg says that you shouldn't just blow them off as meaningless.

"Bride-to-be dreams are trying to help you with the different stresses you experience as you plan the big day, as well as help you resolve any issues that need to be taken care of before you start your new life," Loewenberg says. When you dream about wedding planning or the ceremony to come, usually the meaning is related to the real-life wedding planning process or reflects something we’re fearful of.

"[Dreaming about] being late for your wedding is super common, merely because there are so many deadlines you are dealing with,” Loewenberg says. “But dreaming something is wrong with the dress often means there is something with yourself you are unhappy with." Analyze whether the fear that comes up in the dream is literal, or if it might be symbolic of something deeper — like being afraid of commitment or having self-esteem or trust issues.

Dreams About Marriage When You’re Single

When you have a dream about weddings, it doesn’t necessarily imply a desire to tie the knot right now. If you’re nowhere near actually getting married IRL, this dream could feel like it came out of left field. However, the dream may relate more to the themes of what marriage symbolizes in our culture — like commitment. "Marriage is two individuals committing to each other 'til death do they part,' so to dream of marriage when you aren't planning a wedding would mean there is some other type of commitment you are embarking on in real life," Loewenberg says. "Whatever this commitment or obligation is, your subconscious is presenting it to you in the form of a marriage so you can better understand your role in it.”

This commitment could be something obvious, like taking a new job or signing a lease, or something more abstract, like adding new habits to your routine or developing a deeper friendship with someone. According to Loewenberg, these dreams are asking us if we’re prepared to be in these commitments for the long haul.

Dreams About Being Proposed To

Dreams about getting engaged or being proposed to, like dreams about getting married, often symbolize commitment. But according to Loewenberg, they show that you're at a different point in the commitment process. While wedding dreams suggest you're already committed to something, a proposal dream might mean that you're still figuring out whether you want to get involved.

"Typically, being proposed to [in a dream] would suggest you are kicking around the idea of something," says Loewenberg. "Did someone suggest or propose an idea to you? Are you thinking about 'engaging' in some activity or situation?” These dreams can help our conscious minds weigh the pros and cons of engaging with a new responsibility or commitment, and help us work through the fears, anxieties, and pressures of potentially taking on something new.

Among all the weird marriage-related dreams you can have, one of the most awkward is marrying someone who isn’t your partner or who you’re not at all interested in. This often happens because this person is significant to our lives in some other way, or simply popping up in our memory — but it doesn’t necessarily mean you have a secret crush on them.

Instead, your dream’s beloved might be a personal symbol of the values they represent in your life. "Ask yourself what stands out about them to you — maybe they are always volunteering or doing charitable work,” Loewnberg says. “That would likely be what they represent to you, in which case your subconscious is proposing the idea of of being more charitable in your own life."

Dreams About Marrying A Random Stranger

What if you have absolutely no clue who this person at the nocturnal altar is? Like, total stranger. That’s an uneasy feeling.

Loewenberg says strangers usually represent parts of yourself that you’re not yet familiar with. “To marry a stranger can mean you are uniting or integrating unfamiliar elements into your personality,” she says — such as becoming more assertive and self-assured. You may be totally down to tie the knot with this rando in your dream, and if that’s the case, Loewenberg says it can mean your subconscious is happy with this new part of your personality. But on the flip side, “If you are unhappy, then you could be overdoing it in the aggressive department, or you are uncomfortable taking on this behavior,” she explains.

Dreams About Marrying Someone Other Than Your Current Partner

"If you already know you are dissatisfied with your marriage, then yes, [a dream of marrying someone else] can symbolize that," Loewenberg says. "But if [in a dream] you are marrying someone you know or know of (like a celebrity), then apply this little trick: What three things first come to mind when you think of this person? Of those three things, at least one of them is a quality you need to commit to 'til death do you part.'" In other words, use your dream lover as a mirror to your subconscious desires.

What if you’re dreaming about getting married to an ex? “Marrying an ex instead of your current partner may point to unresolved issues within yourself,” Loewenberg says. “[These may] need to be taken care of before you walk down the aisle.” Use these dreams as guides to what personal issues you should be working through before committing to a new relationship or getting deeper into a current one.

Dreams About Someone Else’s Wedding

Sometimes marriage ends up being a dream theme — like when your teeth fall out in your dreams — even when you’re not the one getting hitched. "Whenever you are the observer in a wedding dream rather than the participant, it will be connected to some situation in your real life where you are not taking an active role,” Loewenberg says. “Most often, it is about an issue that does not involve you but concerns you and is on your mind, like a friend or family member's issue."

Try to analyze your own dream by examining who’s getting married, what role you’re playing in the wedding, and how you’re feeling throughout the dream. “Your subconscious may be showing you that you are not taking an active enough role in some area, and that in order to reach a particular goal, you need to commit to it," Loewenberg says.

Dreams That You Don’t Want To Get Married

Whether you’re totally keen on the idea of marriage IRL or not, dream you might have other ideas. Or maybe you are already married, but you’re dreaming about not wanting to get married, which can seem a bit scary. “When figuring out your dream, it's often a good idea to start with the obvious,” says Loewenberg. “Are you unhappy in your marriage? If so, your subconscious is urging you to do something about it because you clearly aren't at peace with yourself at the moment.”

If you are happy with your marriage, the dream can be representative of some other commitment you’re not happy with. “Your dream is likely showing you this commitment or obligation in the form of a wedding to bring home the fact that you are going to be stuck with this for a long time,” notes Loewenberg, “so you need to figure out if it is worth it or not.”

If you’re dreaming of fearing marriage and you’re not actually married in the waking world, Loewenberg says it could mean you’re not ready for that kind of commitment right now. “Dreams often give us a trial run so we can figure out if something feels right for us before we go through with it in real life,” she explains.

Dreams That You Hate Your Engagement Ring

One wedding-related dream that can be super confusing is loving the person doing the proposing, but being totally turned off by the ring. One moment you’re all excited your dream partner is down on one knee, and the next they pull out a hideous rock that you would not be caught dead wearing for the rest of your life. If you don’t like your engagement ring in your dream, there are a few things it could mean that run deeper than a piece of jewelry.

“A ring is just one piece of the wedding journey, so it would likely symbolize one element of your relationship you are unhappy with,” offers Loewenberg. “Aside from getting married, is there anything else your fiancé has ‘proposed’ that you don't like? Any idea or plans he or she has that you are unhappy with? If so, this dream is suggesting you address it.” The same also applies if you don’t actually have a fiancé: Your subconscious could be pointing to someone else close to you who’s made recent plans you don’t agree with.

Sometimes dreams are straightforward and don’t require a whole lot of decoding, but other times, they’re just plain weird. And more often than not, they aren’t quite what they seem. Just like any other type of dream, there’s a good chance your wedding dream is more symbolic than anything else — a message brewing deep in your subconscious. It’s up to you how you decide to listen.

Lauri Quinn Loewenberg, dream analyst and author of Dream On It

More like this
65 Funny Dares You Can Send Your Friends Over Text
By Siena Gagliano
35 Holiday Trivia Facts That Will Impress Your Guests This Year
By Lauren Grant and Emma Carey
Are Capricorn & Aquarius Compatible In A Relationship? Astrologers Weigh In
By Kristine Fellizar
Bumble's "Compliments" Feature Lets You Message Before You Match
By Lexi Inks
Get Even More From Bustle — Sign Up For The Newsletter

This article was originally published on Feb. 9, 2015