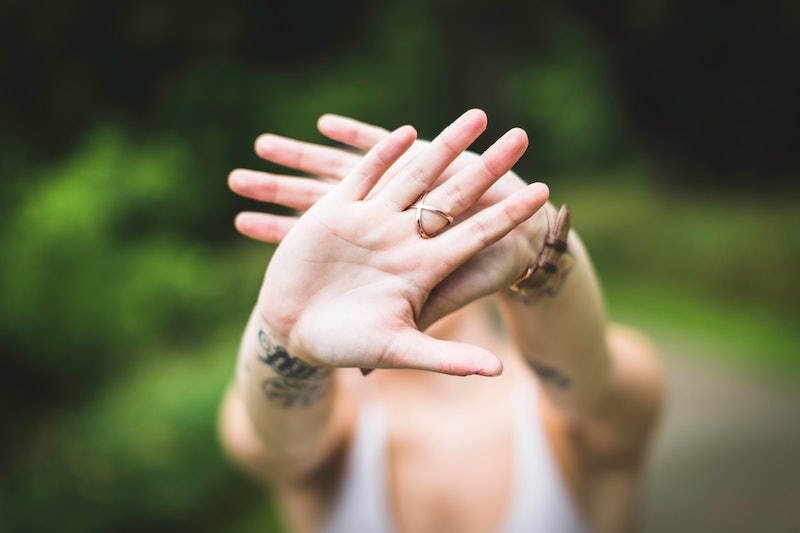 No matter who you are or where you grew up, almost all of us are conditioned from childhood to believe that it’s impolite to refuse to give what is expected of us. Whether it’s our time, our bodies, our smiles, our stories, our forgiveness, or our explanations, women (and men) are continually told how they should “behave.” So just in case no one’s told you this yet, I’m telling you now that there are some things you will never owe anyone. Period.

If you’ve found yourself spending a ton of time doing things that you don’t really want to do lately, it could be because you’re laboring under the misconception that being a good person/partner/employee/parent means saying “yes” when you want to say “no.” That couldn’t be more untrue, though. You should obviously practice kindness and strive to be the best version of yourself — but don’t make the mistake of thinking that this is the same thing as apologizing for crap that isn’t your fault, having sex when you’re not really feeling it, or smiling at strangers when what you actually want to do is rock a solid RBF.

Here are 11 things that you will never owe anyone, no matter what.

Unfortunately, I don't think there's a woman alive who hasn't heard that they "look so much prettier" when they smile. The fact is, men have been conditioned to think that telling women what to do with their faces is acceptable behavior. Hell, Hillary Clinton was criticized for not smiling throughout the 2016 election cycle, and she was a freaking presidential candidate.

It's not inherently rude or "threatening" to frown while female. Not only is it a sexist double standard to expect women to smile on command, it's also creepy AF. As the Huffington Post put it back in 2016, "The sexualization behind telling women to smile is alarming. It makes women feel that we are only meant to be happy and pretty and it’s a passive way to engage into an unwanted conversation. Asking a woman to smile is a selfish act and it’s rarely in a caring tone; it’s condescending and it turns a simple gesture into something sexual." You don't owe your smile to anyone.

Women are conditioned to laugh at sh*tty jokes because it's the "polite" thing to do, but forget that nonsense. If you don't think your date's joke is funny, then you don't have to laugh. If your dad makes a racist/sexist/homophobic/speciesist joke at dinner, you don't have to laugh then either. If one of your friends "endearingly" makes fun of your breast-size for the 100th time, not laughing makes sense then as well.

You probably don't want to hurt anyone's feelings, (I don't either) but you're not obligated to laugh at jokes that you don't find funny. Laughing at jokes when you don't really want to isn't your responsibility, and in my experience, it just doesn't feel good.

Under no circumstances do you owe any part of your body to someone else. If you're in a serious relationship or married, that does not mean you've automatically consented to having sex with your partner anytime they want you to. If your date bought you a super fancy dinner, that doesn't mean they own your vagina for the night.

If your ex sexually abused/assaulted you, the fact that they were your partner at the time doesn't make what they did to you OK. If you're pregnant but you don't want to be, you're the only person who should get to decide whether abortion, adoption, or motherhood is the right choice for you. Nobody has the right to make decisions about your body, or touch you, without your express consent.

Very few things are more precious than time. If you're remotely introverted or struggle with mental illness on any level, this is perhaps even more true. So whether you need to say "nope" to working overtime this weekend because you can't recall the last time you took two days off in a row — or you need to cancel dinner with friends so you can catch up on your alone time — know that you are not required to over-commit yourself to anyone or anything.

An Apology For Something You're Not Sorry For

It is incredibly difficult to break the habit of sorry for things that you really shouldn't be sorry for — especially if you're a woman who's been socialized to over-apologize. But it is both possible and important to stop saying sorry when you're not actually sorry. No matter how polite you were raised to be, understand that it's unnecessary to apologize when you've done nothing wrong.

If you yell at your partner or make a mistake at work, those are times when an apology is appropriate. But don't feel like you ever have to apologize for being assertive, taking care of yourself, or asking for what you want. And just like you shouldn't have to apologize for things you're not sorry for, you shouldn't feel pressured to forgive someone who has abused you in any way. Which brings us to...

Contrary to popular opinion, it's not always healthy to absolve someone who hurt you. While forgiveness can be healing, it's also perfectly understandable if you don't think you'll ever be able to forgive someone who physically, sexually, or emotionally abused you in the past.

This isn't just my opinion, either. In an article for Psychology Today, Deborah Schurman-Kauflin Ph.D. writes: "Forgiveness comes from within. It is not something that can be forced. Either you can do it or you can’t. If you cannot, then don’t think that you are a bad person or that you failed in some way." Schurman-Kauflin continues, "In some cases, forgiveness is just not possible. You may learn not to despise the perpetrator, but saying you forgive can be hollow if that is not what you truly feel."

The Details Of Your Sexual History

Whether it's a Facebook message from someone you barely know, a text from a toxic friend, an incoming call that you simply don't feel like answering, or an unsolicited hug from your creepy uncle, you don't owe anyone a polite interaction.

You're allowed to send phone calls to voicemail. You're not a jerk if you block abusive exes or Twitter users who have harassed you. There is nothing hateful about protecting your peace. As writer Caroline Garnet McGraw put it in her article on the topic: "When you say, 'I don’t owe anyone an interaction,' you’re not harming anyone. You’re just reminding yourself of what is true. It’s not your job to people-please or walk on eggshells. Rather, your job is to live with love and integrity."

A "Coming Out" Speech

I'm bisexual as hell, but I reject the notion that it's my moral duty to come out to every single person I've ever known. Don't get me wrong, I enjoy writing about my sexuality, and I'm becoming more and more vocal about it all the time. I just don't think I — or anyone else in the LGBTQ community — should feel like it's their duty to announce their queerness to the entire world. This is especially true if you live somewhere where hate crimes toward LGBTQ people are common.

Having said all of that, if you want to come out to everyone you meet, that's also great. Just don't feel like you have to come out to people that you're not comfortable coming out to. It's really none of their business if you don't want it to be.

We live in a society where victim-blaming is so common that an NYPD captain recently said this about the 62 percent increase of sex attacks happening in Greenpoint: "It's not a trend that we're too worried about because out of 13 [sex attacks], only two were true stranger rapes." Even our President-elect has been accused of sexual assault by more than a dozen women, though he denies those claims.

What is undeniable is that we live in a rape culture. It's also true that speaking openly about sexual assault and consent is important. That said, if you're a survivor of any form of sexual assault, you are not required to tell anyone your story. As Everyday Feminism put it: "If you choose, you never have to discuss your assault. While society’s silence around sexual assault can add to the stigma, individuals don’t have a responsibility to disclose details of their experiences to prove that they’re against sexual violence." Period.