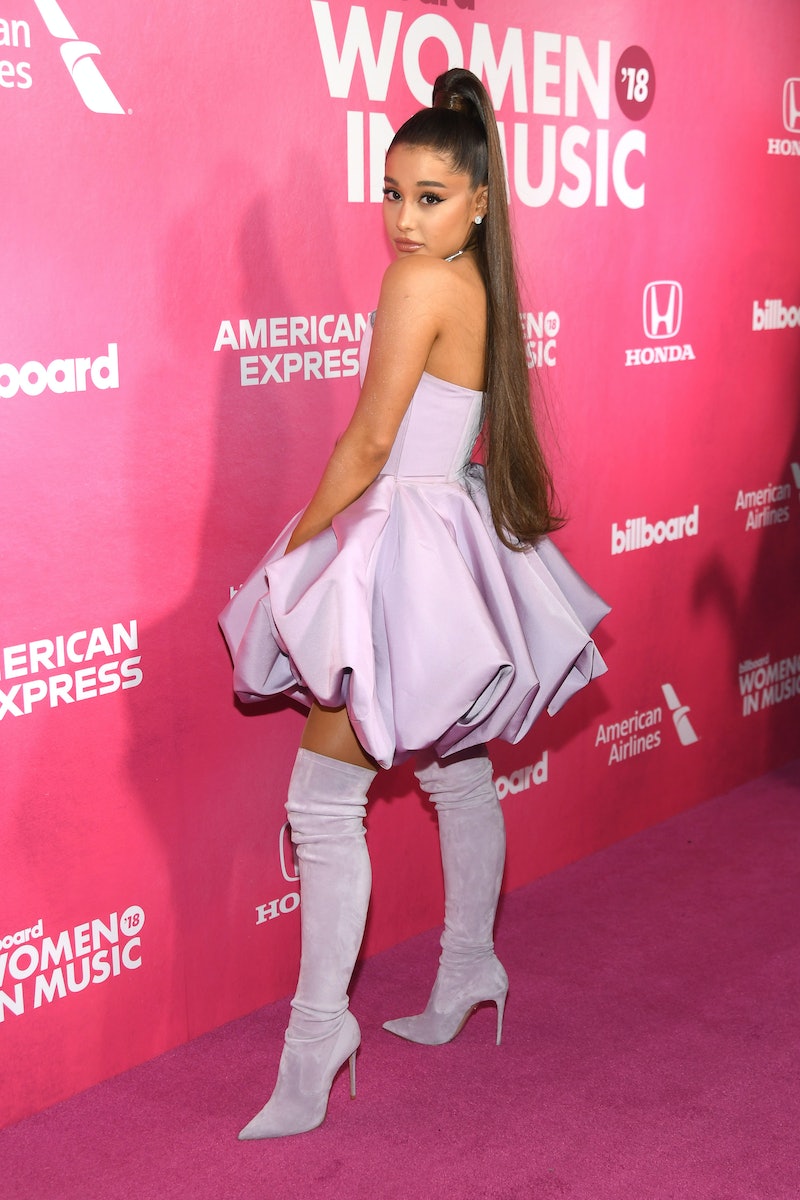 Even if you aren't done listening to Ariana Grande's "Thank U, Next" continuously, the singer is ready to move on to the next song. In her Instagram Story, Grande teased what her new single, "Imagine," is about. She announced through Twitter on Tuesday, Dec. 11 that her latest song will drop on Thursday night, Dec. 13. And even though that meant only a couple of days of anticipation, Grande wanted to explain to her fans what they can expect from this second single off her forthcoming album, Thank U, Next. And based on her tease, it seems "Imagine" is going to be less of a break up anthem, and more a song about heartbreak.

Grande's "Thank U, Next" has been dominating the pop culture zeitgeist, in large part due to her rom-com-fueled music video. But her countdown clocks on her recent Instagram Story show how excited she is for "Imagine" to drop. Along with the countdown, she shared a draft of a tweet that outlines what Thank U, Next and "Imagine" are all about. Although she didn't tweet out the statement, the draft said:

"a lot of this album mourns failed yet important, beautiful relationships in my life (as well as celebrates growth / exploring new independence). but for those of you asking about imagine: i would say if 'thank u, next' = acceptance... 'imagine' = denial. hope that makes sense."

"Thank U, Next" talked about those "failed yet important, beautiful relationships" that she mentioned the album will focus on. In the first verse of her hit song, she references her exes Big Sean, Ricky Alvarez, Mac Miller (whom she calls by his full name Malcolm), and Pete Davidson. It's unclear from her unpublished tweet if "Imagine" will directly be about being in denial about the loss of one of these specific relationships. But if it is, it seems most likely that the song will either address her breakup with ex-fiancé Davidson or the death of her former boyfriend Miller.

After beginning to date in May and getting engaged in June, Davidson and Grande ended their whirlwind romance in October. Beyond the incredibly fast nature of their relationship being a potential cause for their breakup, Grande's ex Miller died from an unintentional overdose in September. The musicians had dated for almost two years when they broke up in May, and Grande has not been shy about letting people know how deeply his death has affected her. Though some fans unfairly criticized Grande and even blamed her for Miller's death, she's been open about mourning her former boyfriend.

Unfortunately, Grande has been through a lot this year, more than enough to inspire multiple songs about love lost, denial, and personal heartbreak. And denial is one of the early stages of grief, so "Imagine" will undoubtedly be a tearjerker.

Yet, Grande's Twitter draft addressed how Thank U, Next also "celebrates growth / exploring new independence." So even if she's mourning the end of a relationship in "Imagine," Grande will also embrace being on her own in Thank U, Next as she continues to figure out the emotional ups and downs of life.