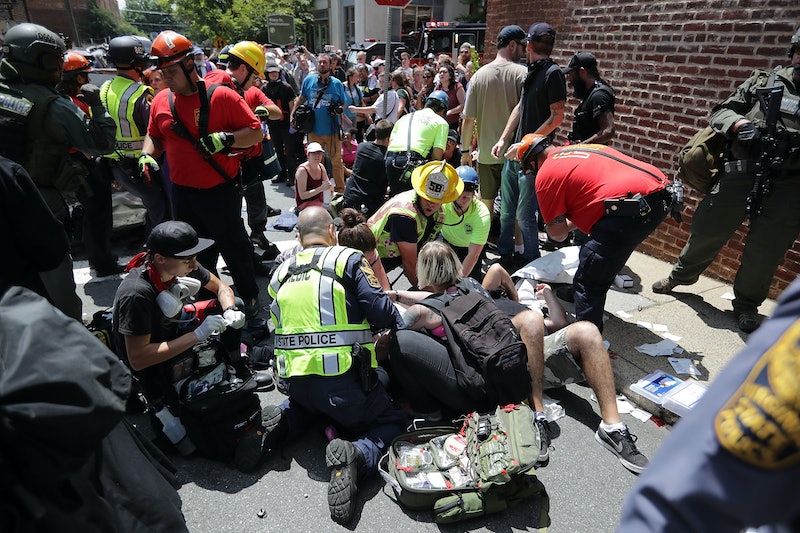 So you're at a party, and someone says something ignorant. And while you know that they're in the wrong, and that you could totally engage them and win if you were a bit more prepared, your words escape you. To make sure that doesn't happen, we've compiled a series of handy reference guides with the most common arguments — and your counter-arguments — for all of the hot-button issues of the day. This week's topic: How to argue about Charlottesville.

Common Argument #1: Confederate monuments are a part of history, and they shouldn't be taken down due to political correctness.

Your Response: In reality, they're a lot more than that. They're monuments, and in some cases memorials, to a racist, armed rebellion against the American union, undertaken explicitly to ensure that black people would continue to be held as chattel slavery.

And if you're not convinced that this is about more than simple history, ask yourself why hundreds of white supremacists and neo-Nazis turned out at the University of Virginia, torches in hand, to defend one of them. They know exactly what they're standing up for, and it isn't something as anodyne and bloodless as "preservation of history." It's about preservation of white supremacy, and the terrorizing of black Americans by insisting their humanity doesn't matter.

Common Argument #2: People should be able to exercise free speech!

Your Response: Freedom of speech is hugely important. So much so that the ACLU once defended the rights of literal Nazis to publicly march. It's one of the most fraught questions in American life, thanks to the country's history of violent racist oppression, and the paramount nature of the First Amendment ― where is the line drawn?

To be clear, however, freedom of speech doesn't mean the speaker can't be exposed, ridiculed, criticized, scrutinized, condemned, called a monster and a racist, or themselves be protested against. And wherever the line of acceptable free speech versus racist incitement is, it's definitely a long ways from running over protesters in a car.

Common Argument #3: Why does Trump have to answer for the racist protesters? They aren't necessarily his supporters.

Your Response: Throughout the 2016 campaign, Trump enjoyed a breadth of support from white supremacists and neo-Nazis unseen in elections past. That might be why he infamously stumbled when initially asked to condemn former KKK leader David Duke last year, and why after becoming president, his administration halted funding for combating white nationalist extremist groups.

Also, here's a video of a Charlottesville protester throwing up Nazi salutes while chanting "Heil Trump!" Make of it what you will.

Your Response: He just couldn't bring himself to denounce racist, white supremacist, and neo-Nazi hatred, though. To the contrary, he decided to stick a qualifier on it, remarking that the bigotry and violence had come "on many sides."

Considering he was speaking in response to an incident in which a group of anti-racist counter-protesters were rammed by a car, leaving at least one dead and 19 reportedly injured, that's damn near a scandalous slur against the people who turned out to oppose racism in Charlottesville.

Common Argument #5: You shouldn't need to single out one group to denounce violence, though.

Your Response: That's not what Trump's been saying for years about terrorist incidents committed by Muslims or Islamic militant groups. In fact, he's argued the exact opposite. Here's what he said as a candidate last year, in defense of his constant use of the phrase "radical Islamic terror."

We will defeat Radical Islamic Terrorism, just as we have defeated every threat we have faced in every age before. But we will not defeat it with closed eyes, or silenced voices. Anyone who cannot name our enemy, is not fit to lead this country. Anyone who cannot condemn the hatred, oppression and violence of Radical Islam lacks the moral clarity to serve as our President.

So, why does Trump have the "moral clarity" to specifically condemn Islamic terrorism, but not racist and neo-Nazi terrorism? The simplest answer: the American far-right, much of which is shot-through with white nationalism and supremacy, is part of his political base. Which means, in the most strenuosly generous interpretation, he doesn't find their views particularly objectionable.

Your Response: Setting aside that nobody was killed in the high-profile clashes in Berkeley earlier this year, much less plowed a car into a crowd of people, acts of violence committed in the name of white supremacy, racism, and neo-Nazism are not morally equivalent to acts of violence (or in many cases, simply property damage) committed in opposition to those forces.

While it's perfectly fair for people to argue and disagree over whether violence from anti-racists and anti-fascists is ever acceptable, and where that, line is drawn, it is not morally equivalent to violence ― especially lethal violence ― committed in service of racist oppression.

Common Argument #7: These kinds of incidents are rare, and they're getting blown out of proportion.

Your Response: Institutions tasked with keeping track of hate crimes have found such incidents spiking over the past couple of years, including the Southern Poverty Law Center, and the state of California. Also, in the post-9/11 era, incidents of domestic terrorism by far-right white nationalists have been by far the deadliest.

The fact that these things often don't get as much press or as much attention doesn't mean they don't happen, and in relative terms, the problem seems to be getting worse, not better.