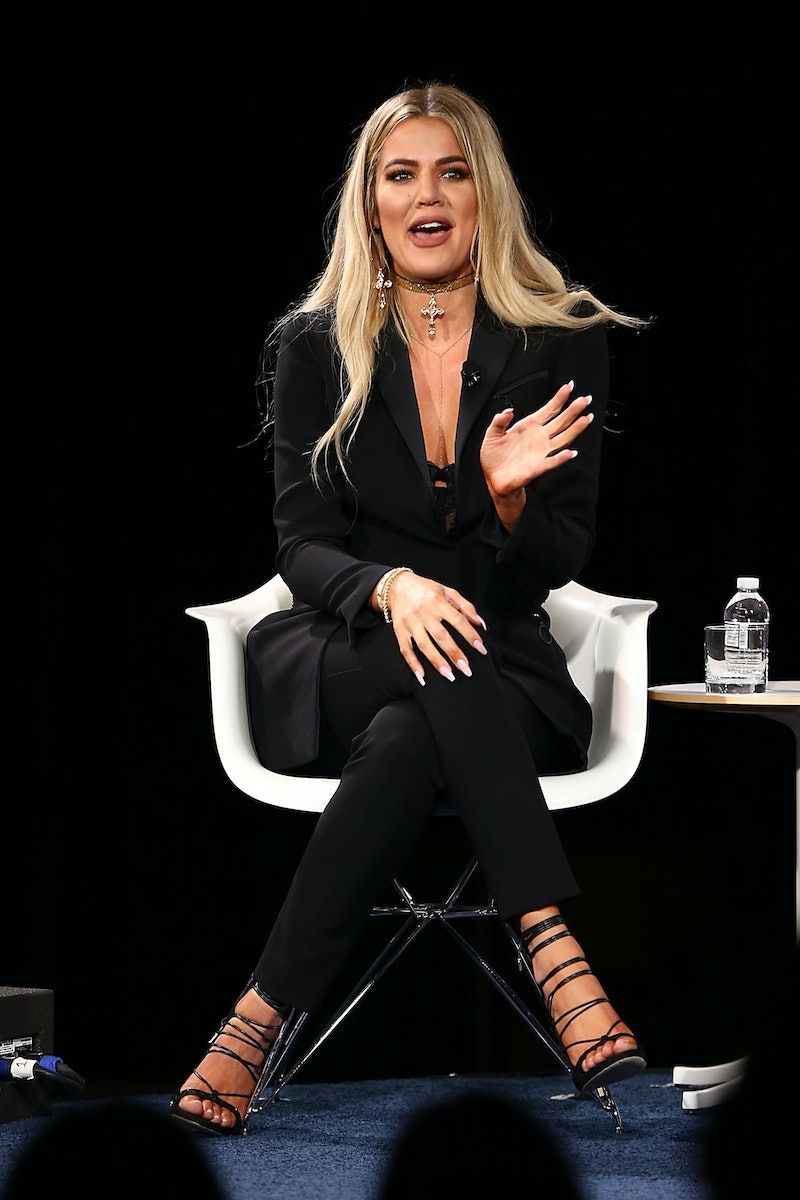 Of course, a whole bunch of Khloé Kardashian's famous family members and fans celebrated her birthday on Thursday, June 27 by posting throwback photos and heartfelt messages online. But amid all those well wishes, one post stood out... for a different reason. Kardashian's ex Tristan Thompson wished her a happy birthday — very publicly — and given their rocky history, it was a bit baffling. According to a report from People, Kardashian's reaction to Thompson's message is pretty in line with the internet's overall response.

An inside source claimed to People that the reality star "didn’t really get why he posted it." That same person added, "They have a child together, but are not together. Her family thinks he posted it because he wants to make himself look good. Tristan and Khloé co-parent True, but that’s it."

For those who are curious, Thompson posted a picture on Instagram of Kardashian holding their daughter True. He wrote:

"Happy birthday @khloekardashian You are the most beautiful human I have ever met inside and out. Thank you for being an amazing mommy to our princess True. She is blessed to have someone like you to look up to. I wish you nothing but more success and sending you positive blessing your way. Enjoy your day Koko ❤️"

The NBA player also limited the comments on his post, which probably was a smart move, considering in the past, fans have filled the comments section of Thompson's Instagram with, uh, less than positive responses (including a ton of trash can emojis).

As for why Thompson's Instagram post is more than a little awkward, he's faced two very public cheating scandals while dating Kardashian. First, in April 2018, videos surfaced that fueled rumors that Thompson cheated on Kardashian with other women at a club. At the time, Kardashian was 9 months pregnant, and the whole situation later played out on-screen on Keeping Up With The Kardashians.

Thompson has never publicly addressed the claims (and has not responded to Bustle's previous requests for comment), but Kardashian live-tweeted along with the episode when it aired in November 2018. Despite all that, it appeared the couple briefly got back together and tried to make things work for their daughter's sake, but split this past February amid rumors that he cheated again. That time, the situation involved longtime family friend, Jordyn Woods. While Woods denied that anything "intimate" happened, she did claim they kissed.

Now, that second scandal is currently playing out on the season finale of KUWTK. So not only does Kardashian have to relive all the drama, but fans get an inside look at how it all played out. And let's just say Thompson does not appear in the best light.

Based on Kardashian's past comments, it sounds like they're still involved in each other's lives because they're focused on co-parenting True together — but nothing more than that. While maybe Thompson's birthday message was well-intentioned, the internet probably isn't going to magically forget all he's put her through in the past year. So all in all, the Instagram post is kind of cringe-y, and it makes sense why even Kardashian "didn't really get why" he posted it.