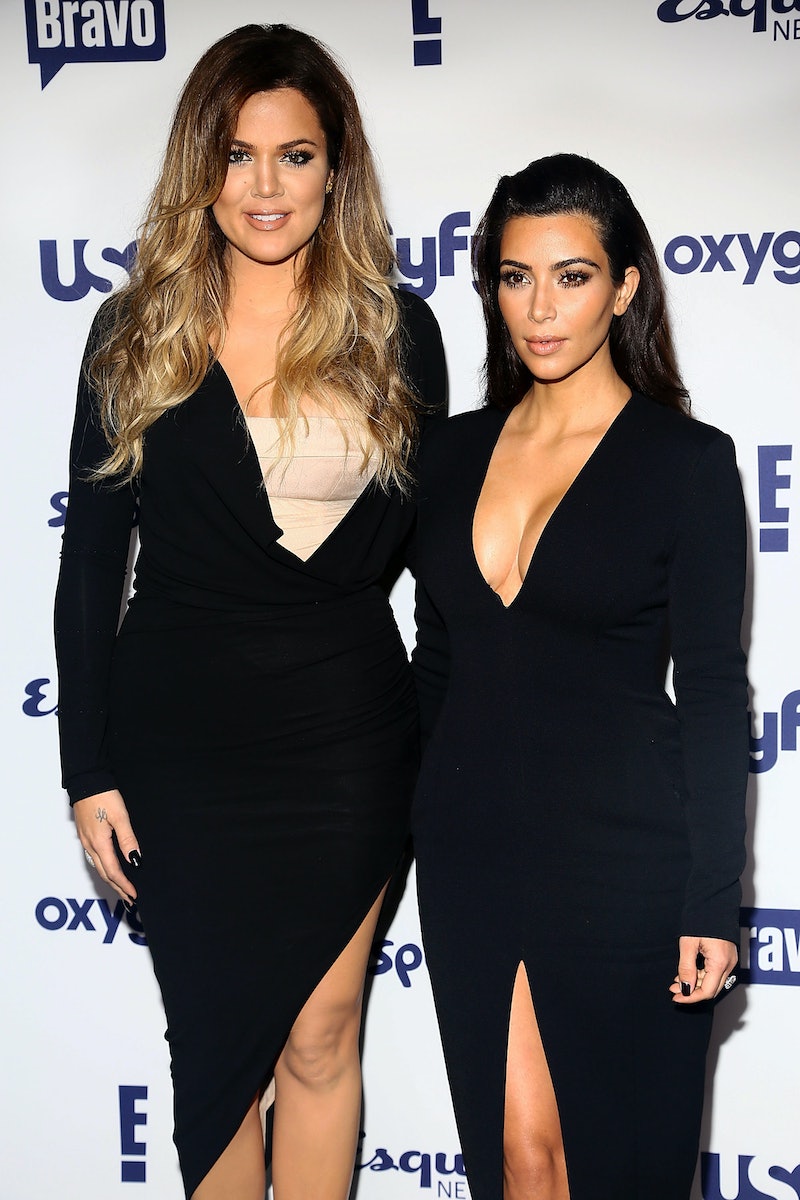 In her tweet, which she also shared on Instagram, Kim praised Khloé for the "strength" she's shown in the past year. Khloé's gone through pregnancy and childbirth, in addition to the reported cheating scandal involving her partner, Tristan Thompson, and she's displayed grace and composure through all of it. (When the cheating rumors broke, Bustle reached out to reps for Thompson and Khloé, but did not receive an immediate response.)

"Happy Birthday to one of my favorite souls on this planet! @khloekardashian This year u have shown strength like none other. I admire you for always following your heart. I love seeing u as a mom & can't wait for the years ahead. Let's celebrate you today! I love you to infinity!"

The photo Kim shared in the tweet shows her and Khloé relaxing on a couch in sweatshirts, with Khloé holding both babies. Chicago is giving off a small smile, while True doesn't look too happy — but she is a newborn, after all. And the two sisters look so relaxed and comfortable, which hopefully means they have at least a little time to sit back and enjoy motherhood amid their busy schedules.

The picture itself is pretty special, too, since the two cousins probably haven't known each other for too long. Khloé gave birth in Cleveland, Thompson's hometown, and it's not exactly clear if she's moved back to California for good this time. It's nice to see that she's been able to spend time with her west coast-based family, though. And Kris Jenner announced that Khloé would be moving back to California earlier this month, so it's possible that the photo was taken at Khloé's house.

It's worth noting that there's been some backlash to the birthday tweet, thanks to Kim's hairstyle in the picture. Kim is wearing her hair in Fulani braids, which she also wore to the MTV Movie & TV Awards earlier this month. She's been accused of cultural appropriation for wearing this hairstyle originating from West Africa and the Sahel region. Acknowledging the previous backlash, Kim told Bustle last week that she wore the braids in solidarity with her daughter North West, who is biracial.

"I actually did that look because North said she wanted braids and asked if I would do them with her. So we braided her hair and then we braided my hair," Kim told Bustle at the time. She also explained, "In no way am I ever trying to disrespect anyone's culture by wearing braids. If anything, my daughter was so excited to see me get matching braids with her. [When] we did her hair in these braids, she was so excited."

While North recently turned 5, both of the babies in Kim's latest photo are still super young — Chicago West was born in January, and True was born in April. Kylie Jenner also gave birth to her first child, Stormi Webster, on Feb. 1. Since then, Kylie seems to have made the decision not to show Stormi's face on social media, deleting some of her old Instagram photos of the baby.

But it looks like Kim and Khloé are fine with sharing pictures of their babies on social media. Hopefully, Khloé's had plenty of down time to spend with her daughter and her siblings on her birthday — she definitely deserves it.