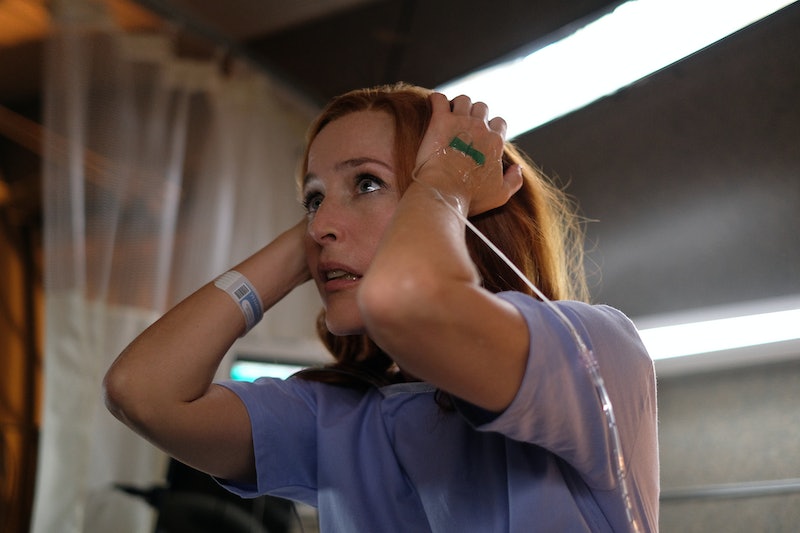 Spoilers for the Season 11 premiere of The X-Files. Trigger warning for discussion of sexual assault.

Dana Scully deserves better. That's always been true in the world of The X-Files (costume designer: Katrina McCarthy) where she's been medically raped, experimented on, and kidnapped by predators. In the Season 11 premiere, The X-Files revealed that CSM impregnated Scully and reached a new low in the process. In a twist that's as tone-deaf as it is infuriating, "My Struggle III" flashed back to the Season 7 episode "En Ami" as the Cigarette Smoking Man disclosed to Skinner that 17 years ago he impregnated Scully with the first "superhuman child." At no point does Cigarette Smoking Man or the show use the word rape, but make no mistake, Scully was raped. Again.

In a post-episode interview with Entertainment Weekly, series creator Chris Carter makes it clear just how out of his depth he is with this disgusting excuse of a "twist." Carter told EW of the revelation,

"He's the figurative father if he's not the actual father. He didn't rape Scully. He impregnated her with science."

There's a term for impregnating someone "with science" against their will, and that term is medical rape. Just to be perfectly clear, if a woman doesn't consent to being artificially inseminated, that's called rape. Add in the part where Scully was apparently drugged and stripped naked for the procedure, and you have such a triggering mess of rape tropes that it's astonishing Carter refuses to acknowledge them.

In "En Ami," Scully falls asleep in Cigarette Smoking Man's car. Viewers see him put on a pair of black gloves before the scene cuts to Scully, in bed and wearing silk pajamas with no recollection of how she got there. The scene was disturbing in 2000, and it's even more disturbing now. Cigarette Smoking Man lured Scully into taking a road trip with him by using the promise of offering her a cure for cancer. He appealed to Scully's scientific nature, and then he medically raped her while she was unconscious. Scully's fictional story hits all too close to home in 2018, as people continue to share their stories of sexual harassment and assault via the #MeToo movement. It's a horrifying scenario that's all too real for so many people, and it's certainly not one that should be used as shock value on a TV series.

The X-Files is presenting viewers with yet another instance where Scully was robbed of her autonomy and had her body violated. Was it not enough that her first abduction left her emotionally scarred, infertile, and sporting an implant that once removed would leave her struggling with cancer? Now the story has taken William, her miracle child, and decided to make him the product of a nightmare scenario.

In his interview with EW, Carter said he believes the development, "adds to the characters in an interesting emotional way." But in actuality, you can bet this story will be less about Scully dealing with the violation she experienced, and more about Mulder's reaction. If the Cigarette Smoking Man is telling the truth — and it's not a given that he is since the man is a habitual liar — then Mulder is not William's father, and Mulder's own father hurt the woman he loves.

Mulder's righteous rage will no doubt drive what could have been a story about Mulder and Scully reconnecting with their son as the world itself collapsed around them. Which of those scenarios actually sounds like an interesting emotional journey for the characters? Because the second one sounds far more powerful than the one that makes the violation of a woman's body the catalyst for two male characters to engage in a moral showdown.

The X-Files has always been problematic, but Scully's position as a badass woman of science as portrayed by Gillian Anderson has made it worth sticking with the series. However, "My Struggle III" went too far. Not only because it revealed that the Cigarette Smoking Man used Scully to create a "superhuman child," but because it took away something precious from Scully: her choice.

Scully was actively trying to become pregnant in Season 7. She went through IVF treatments, but they were unsuccessful. Then in "all things," an episode written by Anderson, Scully took a trip into her past and she revisited the road not traveled. She saw the life she didn't choose and made peace with the one that she did. At the end of the hour, Scully cuddles on the couch with Mulder and it's subtly revealed that they've been engaging in a romantic relationship. In retrospect, it was heavily implied that this was the episode where William was conceived — out of love and very much by choice.

In this new scenario, Scully had no choice. She had no autonomy. She was drugged, she was raped, and it was all done by a man in a position of power. A man the show has the nerve to suggest "loves" Scully. To add even more insult to this travesty, Skinner, who also harbors his own affections for Scully, appears to have decided to keep her in the dark for her own protection. Because this woman who has been to hell and back more than once needs protecting from the truth. There's just no redeeming this horrible, misogynistic storytelling.

Agent Dana Scully will always be an icon, but The X-Files has shown it has little respect for her or women in general. Even if the Cigarette Smoking Man is lying once again, there's no redeeming this arc. It's not just Scully who deserves better from The X-Files — the show's passionate fanbase deserves more than the tasteless, history-shattering development the season premiere offered up as entertainment.