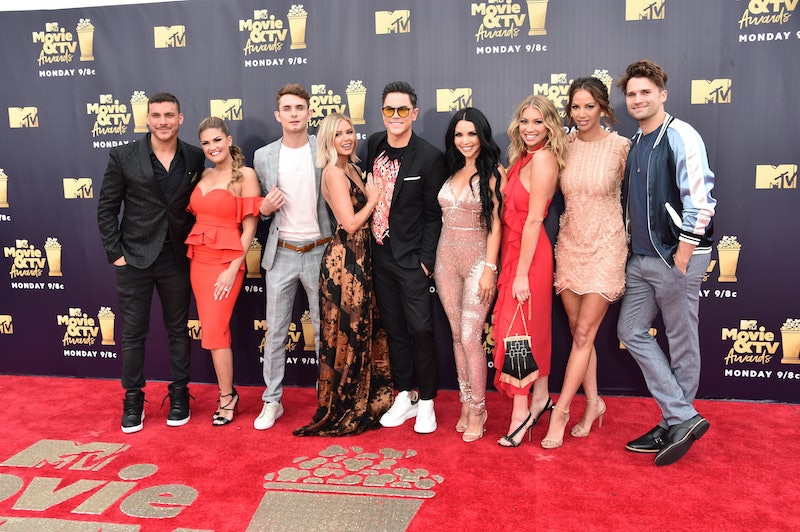 Fry up some goat cheese balls and dunk 'em in ranch dressing, because there is a Sexy Unique Reason to celebrate. On Saturday, June 16, several members of the Vanderpump Rules cast attended the 2018 MTV Movie & TV Awards, crushed the red carpet, and took a lot of pics so we fans could almost feel like we were a part of this historic moment. As previously reported, the hit Bravo reality show is nominated for Best Reality Series/Franchise.

Pump Rules is one of the five reality series/franchises in this category. And whew, this category is as stacked as a Pumptini is sweet: Keeping Up with the Kardashians, Love & Hip Hop, The Real Housewives, and RuPaul’s Drag Race are also in the running toward winning Best Reality Series/Franchise at the 2018 MTV Movie & TV Awards.

But did Pump Rules win? You'll just have to wait to find out. The 2018 MTV Movie & TV Awards will not be on until Monday, June 18 at 9:00 p.m., so the show results have yet to be unveiled. Of course, if you really want/need to see the list of winners before MTV airs the event, you could probably find this year's Movie & TV Awards results somewhere on the internet already. However, you will not find Movie & TV Awards spoilers here.

When MTV released the nominations back in May, the Pump Rules cast made it very clear that they are a) extremely excited to be in this category and b) in it to win it. Shortly after the nominations were announced, the members of LVP’s Sexy Unique Staff tweeted that they are stoked to be up for a golden popcorn statuette and asked fans to vote for their show.

And when it came time to actually go to the award show, Pump Rules didn't just send one or two representatives. They sent almost every person from the main cast: Jax Taylor, Brittany Cartwright, Kristen Doute, Scheana Shay, Tom Sandoval, Ariana Madix, Tom Schwartz, Stassi Schroeder, and James Kennedy all went to the MTV Movie & TV Awards. Main roster members Katie Maloney and Lala Kent did not go, but it sounds like this was due to scheduling conflicts, not some gnarly show drama or whatever. When someone tweet-asked Jax why Katie and Lala weren't there, the newly affianced Pump star replied, "Out of town with other obligations."

Speaking of Jax tweets, here's a SUR-timental note he shared with the internet before he attended the MTV Movie & TV Awards as a nominee.

What a SUR-lwind it has been.