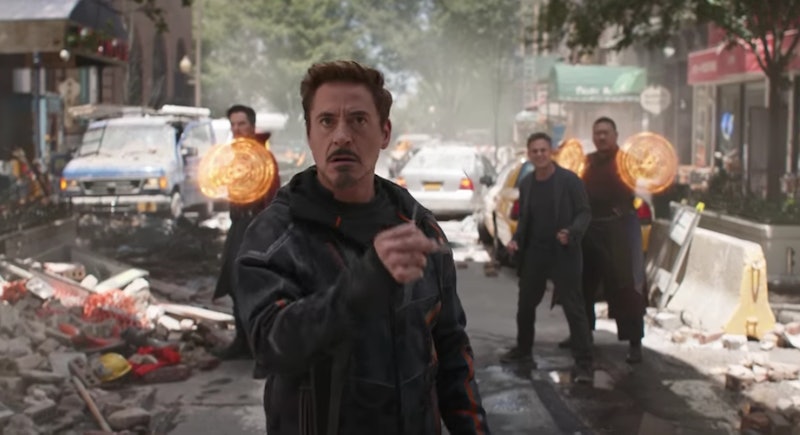 Marvel Entertainment/YouTube
By Shannon Carlin
May 9, 2018

Being that everyone has basically seen the Avengers: Infinity War by now — don't worry, there are no spoilers here, if you haven't — it's no surprise that it's become the internet's favorite subject. And now, Tumblr has given us a Avengers and The Bachelor GIF mashup that is certainly worth your final rose.

Already, there's been the "I don't feel so well" meme which has given your favorite TV and movies an Infinity War twist. Plus, a Friends theory about the latest Avengers film that will have you asking how you missed those infinity stones all those times you re-watched the show. Not to mention, how could Joey possibly be the Reality stone?!

And now, thanks to Tumblr user cptxrogers we now know what it would be like if your favorite Avengers were contestants on The Bachelor. No surprise, Tony Stark, AKA Iron Man, is the star of this show and he's just looking for another Marvel superhero to spend his final days with now that Thanos is back.

Tony S. is the 47-year-old Bachelor who hopes these guys will tolerate his busy saving the world schedule. "I'm excited to meet the contestants," Tony, played by Robert Downey, Jr. says in his gif. "I hope they can keep up with me." Already, I like him more that Arie Luyendyk Jr., how about you? At the very least, I'm assume Charlize Theron does.

As for who will be competing for Iron Man's arc reactor, it's safe to say there's no Laurens here, but there are a couple of Steven/Stephens. There's "Tony's ex," Steven R., better known as Captain America, who has broken Iron Man's heart once before. He's not worried, though.

"How did I leave things with Tony?" he asks. "Not great, but I'm going to win him back." And who knows, Steve's new bearded look might just be the key to rekindling that love.

But, Steve has some stiff competition in "rich" Doctor Stephen Strange, 38, who has the confidence to take on anyone. "I'm the clear choice," his shrug-filled GIF reads. "Are the others rich doctors? I don't think so."

Scientist Bruce B., might have something to say about that or worse, The Hulk might show up instead to talk. Fortunately for Strange, Bruce is very much in the friend-zone with Tony. Or, a place he prefers to call "a comfortable zone of friendship." Whatever you say Hulk.

There may not be any other rich doctors, but there is an actual king present, T'Challa, 34, and he raises Dr. Strange one doctor for many. "A doctor," T'Challa says, "That's cute. I have several doctors in my palace."

Peter Q. is a "legendary outlaw" from way out in the galaxy is definitely ready to bring the drama. Already he's talking smack about the unpleasant characters who showed up to give Tony the world. "I'm going to show him the stars," the Guardian of the Galaxy said. Meanwhile, Loki is bringing the mischief. "In the end," Loki said. "He will kneel."

It's definitely going to be hard for Bucky to win Tony over, you know, since he did kill his parents. But, the Winter Soldier does sound optimistic. "I don't think my past will cause problems between us," he said. "I'm sure Tony and I could make it work." Suuure.

It will be hard with pirate angel baby Thor there. Seriously, just one look in those dreamy blue eyes and it's over. Even Thor knows it. "Just look at this face," he said. "What mortal could resist?"

At least, there's one contestant on this version of The Bachelor that's there for the right reasons. At just 17, Peter Parker, a.k.a. Spider-man, a.k.a. "Tony's adopted son," is just looking for a little companionship. "I'm so pumped to meet the guys," he said. "I can't wait to have another new dad!"

At the end of the day, Avengers fans might have some differing opinions on who Iron Man should end up with. (Though, let's be honest it should be Pepper Potts.) But, I'd like to see him make nice with Captain America. That is, if Bucky "Winter Soldier" Barnes doesn't steal Cap's heart first. Seriously, that would be some very good Bachelor drama.