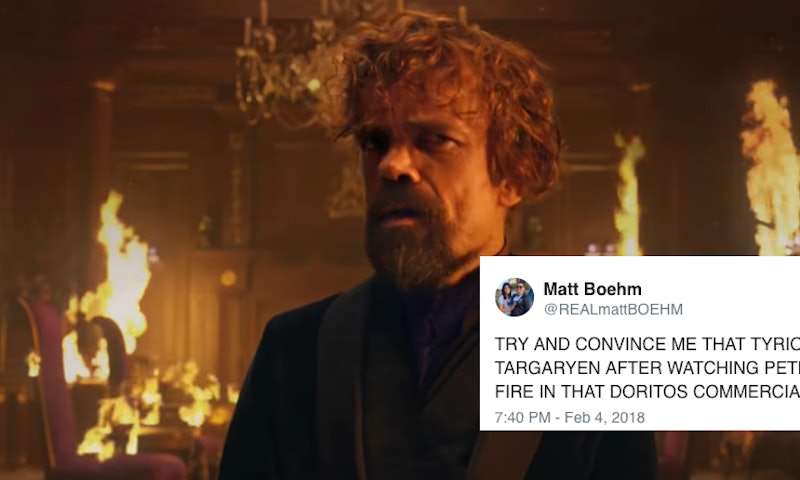 No amount of cheese-flavored snacks could totally satiate a Game of Thrones stan's hunger for new episodes of the HBO fantasy series, but that Super Bowl ad with Peter Dinklage and Morgan Freeman is a pretty decent temporary fix. When that spot for Doritos Blaze and Mountain Dew Ice popped up during the 2018 Super Bowl, Thrones heads pointed out the Doritos half might include a clue regarding Tyrion Lannister's actual lineage. You know what they say: Combing chip commercials for any and all GoT clues is a solid way to pass the time between GoT seasons.

... OK, so most fans probably don’t legitimately believe GoT intentionally spilled what would be a wildly epic twist in a Doritos Super Bowl commercial, but it’s still fun to theorize and joke about. Hey, 2019’s a long ways away. Gotta get those GoT kicks when and where you can.

In a combo ad for Doritos Blaze and Mountain Dew Ice, Dinklage and Freeman take turns lip syncing and promoting their respective product. The GoT star silently raps along with Busta Rhymes’ verse on “Look At Me Now” as Busta watches over him from a moving painting that wouldn't be out of place in Hogwarts. And then, Dinklage breathes fire like he’s one of Daernerys Targaryen’s children. Given a popular theory about Tyrion's family tree, this was quite a way to end the Doritos half of the ad.

For years, many Thrones fans have bounced around the theory that Tyrion Lannister could also be a Targaryen. There’ve been rumblings about Daenerys’ father, Mad King Aerys II Targaryen, and Tyrion’s mother, Joanna Lannister, having some sort of… thing back in the day. Now, do you remember when Tyrion killed Tywin Lannister while he was posted up on the can? The former Lord of Casterly Rock's final words to his youngest child were: “You’re no son of mine.”

Sure, this could’ve been evil Tywin just being evil to Tyrion for the zillionth time. Or this could’ve been his way of saying that the crossbow ambush in the latrine made it hard for Tywin to see Tyrion as his son. Or he could’ve meant it literally. Maybe, in that moment, Tywin was acknowledging that his wife had an affair with the Mad King. And maybe Tywin was dropping a hint that Joanna had a baby with the Mad King. And maybe that was Tywin’s way of telling Tyrion that he’s actually the son of the Mad King. Or maybe none of that’s the case and Tywin really was just being rude ol’ Tywin.

Speaking of dragons and the number three, there is a theory based on a dream that Dany had that House Targaryen needs three dragon riders if it wants to win the Iron Throne. (Don't give up on Viserion!) Obviously, Dany would be one of the riders. Dragon number two would probably go to her nephew, Jon Snow. And as for the final rider? Well, if he is indeed Dany's half-brother, that spot could go to Tyrion.

When the Huffington Post reached out Dinklage about the fan reaction to Doritos TV spot, the award-winning actor said,

“I love every single theory the fans of our show have, because they’re so much fun. They get to show the dedication and love they have for the show, but you have to understand that it is a Doritos commercial. It’s not Game of Thrones.”

If Tyrion does happen to find out he is Targaryen at any point during Season 8, this ad will be a co-chip-cidence for the ages. That, or the folks over at Doritos have been on Team Three-Headed Dragon Theory all along. Either way, it'd be about as cool as Freeman's Mountain Dew Ice breath.