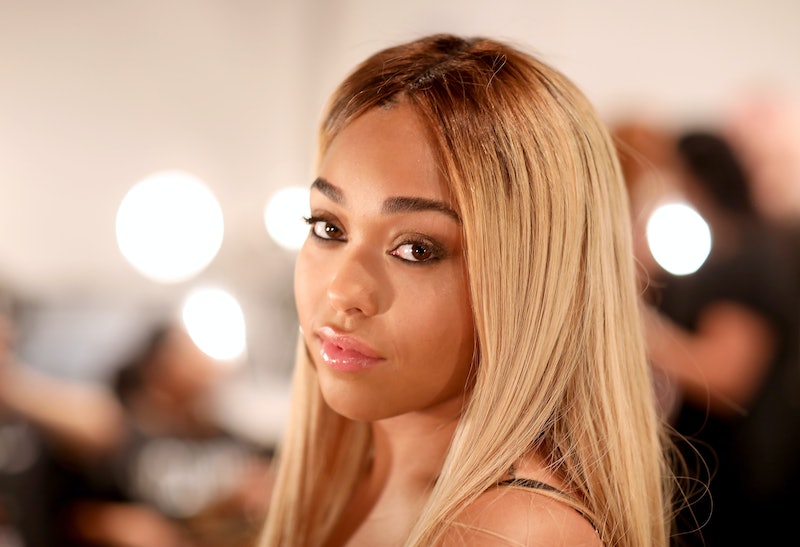 Now that Jordyn Woods has shared her side of the story on the Friday, March 1, edition of Jada Pinkett Smith's Red Table Talk, Kardashian fans everywhere are left wondering one major question: Will the Tristan Thompson scandal be on Keeping Up With the Kardashians' upcoming season? While the famous family have yet to confirm whether or not they will showcase the fallout from the reports that Thompson cheated on Khloé Kardashian with Woods, the model was very clear during her conversation with Pinkett Smith that the scandal was "not a publicity stunt."

Near the end of the 30-minute episode, Pinkett Smith had Woods answer some questions from social media users, including "Taylor from Brooklyn," who asked whether the rumors of Thompson's reported infidelity were fabricated to drum up excitement for the new season of KUWTK. "I wish I could say this was a publicity stunt, but this is my real life, and real people are hurting," Woods explained. "It's been real."

During her appearance, Woods also explained why she decided to publicly share her side of the story with Pinkett Smith and Red Table Talk viewers. After claiming that she apologized to Kardashian for her part in the scandal, Woods revealed that she expects that the Good American founder will need some time to evaluate her feelings. "But in the process of her processing," she added, "I can't see my family get hurt anymore. So, that's why I had to break my silence."

"I've been respectful through this whole thing," Woods continued, before calling out some of the Kardashians' close friends for attacking her on social media. "I haven't been commenting back. I've been constantly being ridiculed and bullied, and I've kept my dignity. ... If everything's social now [and] that's how people handle things, I have to respect that too. But through that, I'm not going to be the person to clap back and respond out of respect that this is a real situation."

However, during her Red Table Talk conversation with Pinkett Smith, Woods claimed that she had "never" slept with Thompson, and that there was "never anything intimate" going on between them before, during, or after the house party on Feb. 17. She did, however, claim that Thompson kissed her as she was leaving the party early the next morning, but noted that there was "no passion" involved. "On the way out, he did kiss me... no passion, no nothing, it was a kiss on the lips, no tongue kiss, no making out." (Bustle reached out to Thompson's agent about Woods' latest comments, but did not receive an immediate response.)

Woods did admit that she originally lied to her best friend, Kylie Jenner, and Kardashian about what happened at the party, saying "I was honest about being there, but I wasn't honest about the actions that were taking place." She later noted that she did so, "not out of malicious intent, but because I was scared." The model also told Pinkett Smith that she was sitting at the famous red table "to take responsibility" for her part in the cheating scandal.

If the reports of Thompson's rumored infidelity are addressed on Season 16 of KUWTK, it won't be the first time that Kardashian would have to relive a difficult period of her relationship with the NBA star. In April 2018, right before Khloé gave birth to their daughter, True, reports broke that Thompson had allegedly cheated on the reality star multiple times. Khloé has since acknowledged those allegations on Twitter, while Thompson has never publicly commented on them. (At the time, Bustle reached out to Thompson's reps regarding the rumors, but did not receive a response.)

Months later, the reality star was forced to relive the difficult time when the episodes of KUWTK detailing True's birth aired in November. "Oh my God my heart is racing! So crazy how emotions never die! You may forgive but forgetting is not possible," Kardashian wrote on Twitter at the time.

While it seems unlikely that the always-forthright Kardashian family will opt out of addressing the cheating scandal completely on the show, fans will have to wait until the upcoming season of KUWTK airs to see just how much of the fallout they'll showcase on national television, and how much they'll choose to keep private.