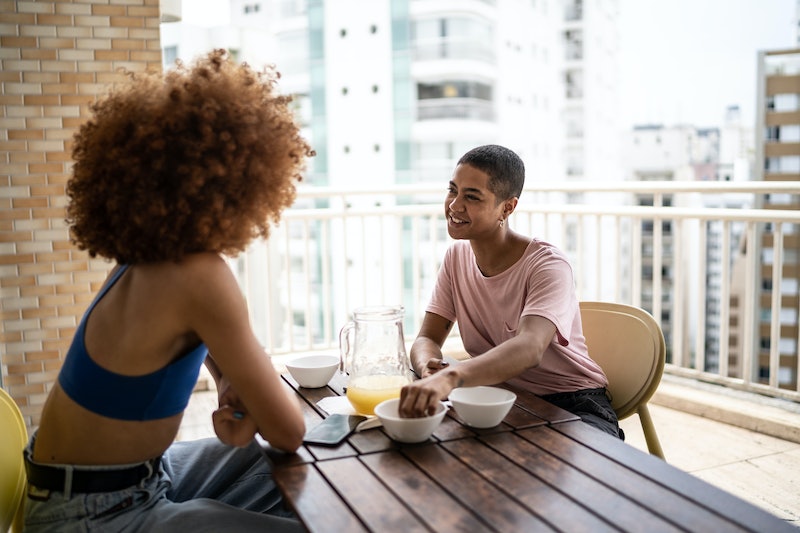 Ever send out a few texts to see if someone would be down to get together, but then they don’t respond and you think, “Wow, no one wants to hang out with me”? That’s as good a moment as any to assess your connections and consider if your friends are just busy, or if they’re brushing you off for another reason.

If someone’s lack of response has become a trend, it could be a sign your friendship is drifting apart. “That happens when you’ve grown in different directions, no longer have much in common, or have schedules that are no longer in sync,” psychologist and friendship expert Irene S. Levine, Ph.D., tells Bustle. There also may be underlying hurt feelings that need to be discussed. You won’t know why your friend doesn’t want to hang out — or if it’s a temporary or permanent situation — unless you talk about it.

Of course, it’s also possible someone’s lack of desire to hang out has nothing to do with you or your vibe and everything to do with them. "A lot of people know themselves and how many friends they can keep up with," says therapist Rebecca Rawczak, LICSW. If a newer acquaintance always cancels plans last minute, this may be what’s going on.

As psychotherapist Dorlee Michaeli, LCSW tells Bustle, you’ll know you’ve met a real pal when they’re supportive, they listen, and they’re equally invested in getting together. There’s no use forcing companionship, especially with someone who doesn’t invite you out, doesn’t text back, or otherwise treats you wrong. If anything on the list below rings a bell, it may be time to adjust your expectations, focus on yourself, and consider what you’re willing to accept in a friendship.

1. They Always Bring A Third Wheel

If you were expecting a friend to show up solo, it can come as quite the shock when they roll in with a mystery third person. Of course, they may just want you two to meet. But if they keep bringing unexpected guests without asking, Levine says it could be a sign they’re trying to “dilute the relationship.” In other words, they may no longer be invested in the friendship.

If this keeps happening, the best thing to do is be honest about how you feel. It might spark a much-needed convo about why your friend never wants to hang out with just you.

2. You're The One Making All The Plans

Take note if you’re the only one who reaches out to make plans, as Levine says it could be a sign you aren’t hanging out with “your people.” It’s important to keep in mind that folks get busy and go through phases in life, so it isn’t a big deal if a few Saturdays go by and they don’t ask to meet up. If it feels like no one reaches out on the regular, though, consider it a sign that this particular friend group may not be right for you.

3. They Send Your Calls To Voicemail

Not everyone is a big “phone person,” but consider it another sign if your friend almost always ignores your calls, says relationship expert Dr. Brenda Wade. “People can change over time, including friends,” she tells Bustle. “An old friend may no longer want what you want.” And that may mean they no longer care to invest time and energy, even enough to pick up the phone.

The best way to handle it? Match their energy and reach out less often to see if that makes a difference. “You have the ability to shift the friendship from hot to warm,” Wade says. See if it feels better if you only talk on occasion. Who knows? The friendship might rekindle once you give it a little breathing room.

This one is confusing because it often involves a friend who acts like they want to hang out, but never actually does. This is the person who suggests coffee dates and movie nights, but then doesn’t follow through by making solid plans. If this habit continues, it’s another chance to give them space. "Back off and let your friend initiate," Levine says. "Sometimes, even very good friends need a break from one another."

5. They Give Vague Excuses When Canceling

Consider how your friend goes about canceling plans. Do they have a legit reason? Or is it always one vague excuse after another? "Once or twice may be a coincidence if they give you a strong reason for canceling, like they have another friend visiting from out of town," says Rawczak. "But if they repeatedly give you vague reasons like, 'I’m busy' or 'I already have plans,' then they are either a) a covert operative for an international spy agency, or b) not interested enough in hanging out to make time for it."

6. They Seem Checked Out

Let’s say you do get together, but it’s been 20 minutes and your friend has yet to look up from their phone. Sure, they may be busy responding to something dire, but it's also possible they aren’t fully interested in the get-together.

According to Levine, some friends will act like this when they’re feeling burnt-out, either from life or the friendship. Friendship burnout can happen when one person relies too heavily on the other to fulfill all their needs. It also might mean they aren’t interested in maintaining a connection, at which point you can bid them adieu.

7. All Your Convos Fall Flat

Since not everyone’s super chatty, it’s totally cool if you’re more into quiet hangouts. But if your conversational friend suddenly doesn’t want to talk, it really may be a reflection of your relationship. Levine says convos typically fall flat when one person is only hanging out as a favor, and not because they’re truly invested. It sucks to think of it this way, but it may help explain what’s going on. Talking about it with your friend is the best solution. If you both agree it's not worth the effort, it can save you both a lot of heartache and a lot of wasted time.

8. You Didn’t Get An Invite

While it’s possible they were bad at organizing and left a few people out accidentally, take it as a sign if your friends get together for a party and don’t ask you to join. "A lot of people use parties to start to deepen relationships,” Rawczak says. It’s tough not to take it personally, but know that you’ll be much happier with a friend or friend group who doesn’t leave you out.

If this happens to you with someone you were close with, try turning the tables. Throw your own party and invite a bunch of people. "You may be surprised who shows up, and that’s a strong indication they are interested in knowing you better outside of your shared hobbies,” says Rawczak.

Does it feel like this person is being rude for no reason? Michaeli says it might be their (conscious or unconscious) way of driving a wedge between you, possibly to put you off from trying to hang out again.

In any case, it isn’t something you’ll want to stick around for. “Rudeness is a type of emotional abuse that’ll slowly chip away at your sense of self,” she says. “The cumulative effect of belittling can be long-lasting and difficult to heal.”

10. Their Needs Are Always The Priority

Are your needs never met in your friendship? “Coming in second place with your friend is another red flag things are off,” Michaeli says. “While there may be times when you need to give more to your friend, you shouldn’t always have to put your needs aside for them.” It’s a clear sign this person doesn’t truly want to hang out and/or invest in a relationship since true hangouts are mutually fulfilling.

11. They Take Forever To Text Back

If your friend isn’t feeling it, you may be constantly left on read. “They may not answer texts, calls, or any form of communication,” therapist Stephanie Moir, LMHC tells Bustle. “Some people may even go as far as to block you on social media.” This is a more blatant sign and one that should prompt you to invest energy in others.

Look for changes in yourself as well, like the fact you no longer reach out to this person with stories or life updates, or if you don’t tell them too much about what’s going on in your sphere anymore. It’s likely you’ve sensed that they won’t reciprocate, says Michaeli. So why bother?

13. Lots Of Time Passes Between Convos

You might have the type of friendship where you can go weeks, months, or even years without talking much, and then pick right back up where you left off. If this person isn’t too keen on hanging out, though, you’ll notice that your conversations grow further apart — and when they do happen, the convos aren’t vibrant or fun. “It could be that they don’t want to tell you about what they have been up to anymore,” says psychotherapist Shagoon Maurya, MA.

14. They’re Active On Social Media... But Don’t Text Back

Another reason someone might seem MIA is if their life is super busy, they’re going through a tough time, or are overwhelmed. But take note if you see them splashed across social media, Maurya says. If they’re active everywhere else, but can’t seem to respond to you or hang out, it’s a clear sign they just aren’t that interested.

While this can also be a sign of a selfish friend, someone who is purposefully trying to create distance won’t ask questions when you talk. “Even when you manage to talk to them or meet them, they are uninterested in the conversation or aren’t as expressive,” Maurya says. They won’t want to hear about your life or ask what you’ve been up to.

16. Their Messages Are Super Short

You might even be able to tell your friend doesn’t want to hang out anymore based on how they text, says psychologist Danielle Selvin Harris, Psy.D. Are their replies super boring? Do they give one-word answers? “Not keeping a conversation going anymore is another passive way of trying to end a friendship by closing off communication,” she tells Bustle. “They may just hope you get the hint and stop trying to talk to them.”

Don’t be surprised if you feel drained — from thinking about this friendship, from feeling rejected, or from wondering why they don’t want to hang out, says therapist Meredith Waller, LCSW. No friendship is easy, she notes, but the ones that are worth it will leave you feeling energized most of the time.

The best thing to do if you notice these signs? After talking to your friend, giving them space, and considering what you’re looking for, you may want to cut your losses. “It is important to honor our self-worth by only allowing people into your life that add to it,” says Waller. And that includes folks who won’t leave you sitting home alone.

More like this
15 Ways To Tell Someone Was Just Talking Behind Your Back
By Carolyn Steber
25 Questions To Ask Your Friends When You're Bored
By Lexi Inks
Help! My Partner Only Wants Sex Late At Night & Won’t Compromise
By Sophia Benoit
What Even Is A Healthy Relationship?
By Brittany Leitner
Get Even More From Bustle — Sign Up For The Newsletter

This article was originally published on Oct. 28, 2016