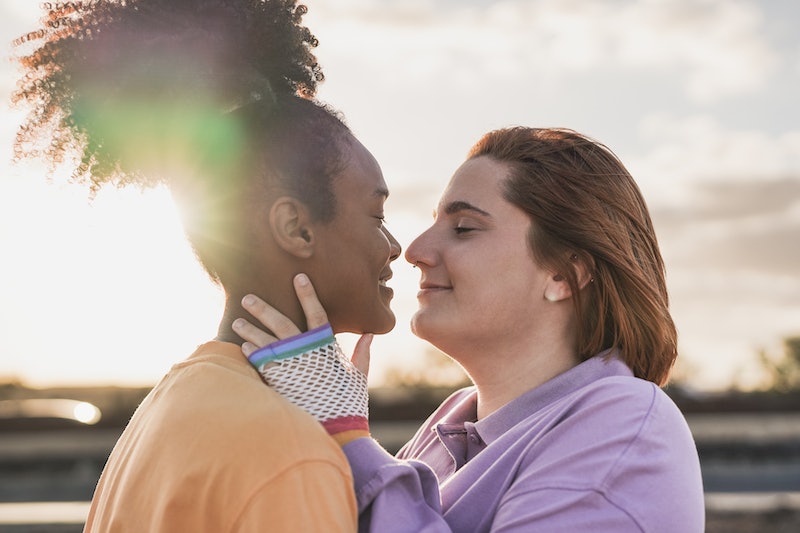 From when to leave your toothbrush at someone's apartment to when to say "I love you” for the first time, a lot of people wonder if their relationship is progressing at a “normal” pace. In 2016, Match did a survey of 2,000 men and women in the UK to find out exactly when relationship milestones happen. Some of them were a big surprise — it takes most people six months to leave a toothbrush at someone's house, which I just don't understand. Do you, like, carry a toothbrush in your bag for six months? Have you seen the bottom of my bag? It's filled with brownie mush and water and regret. I need to get my toothbrush out of there ASAP. But some of it rang true with things my friends have said about their relationships, mostly about when they think is the right time to say those three big words.

Before you get too hung up on what everyone else is doing, I would stress that you shouldn't get too into comparing yourself to a "norm.” Especially when it comes to things like saying “I love you” for the first time, the timing will differ for everyone. "There is no perfect time or place,” Toni Coleman, a relationship coach and divorce mediator, previously told Bustle. “The right time won’t happen because your partner is in a good mood or you are enjoying something special together. It will be the right time because you are both feeling something special for the other, and your connection is undeniable.”

Every relationship is different, and just because you haven't hit certain milestones by a certain time doesn't mean you should panic or see it as a red flag. But it is also good to know how some things tend to progress, because it helps you figure out what you want in a relationship. And more than anything, it's just interesting to see how other relationships work, if only because everyone's "normal" is actually so different. So here's what the survey showed us about the biggest milestones, because I'm so uncool I didn't realize updating your followers about your relationship was still such a thing.

Saying "I Love You" For The First Time

So what about those three little words? "I love you" normally comes about five months into a relationship, according to the survey — or if you want to be more precise, at an average of 144 days. My friends have always thought around six months is standard, so it lines up. However, don't sweat it if you aren’t exactly on this schedule.

Just because your partner doesn’t say ILY when you do, for example, doesn’t mean they don’t feel the same. “Love has varied connotations, meaning some people have it on the tip of their tongue and some reserve it for rare occasions,” relationship and communication expert Chloe Ballatore previously told Bustle. “The important thing is how you feel with the other person and their readiness to make and keep agreements with you. Actions speak louder than words.”

I was surprised to hear that social media updates typically come after you say "I love you.” Are Facebook and Instagram a bigger deal than those three words? According to the survey, at around 157 days in — yes, that’s statistically after saying the L-word — couples update their social media about their relationship. The survey doesn’t specify what kind of social media, but to be fair, it was conducted in 2016 when Facebook status updates were more of a thing. Honestly most of my friends don't update their relationship status at all — I don't think I even have mine on Facebook.

In fact, a Pew Research Center survey conducted in 2019 found that only 48% of users under 30 reported sharing their relationship status on social media. In today’s dating and social media landscape, the soft relationship launch on IG (as opposed to the hard launch) is often what people use as a source of being "official” — and that might just look like a pair of hands in an IG story meal post.

Having A First Kiss

Another surprising one. Apparently 31% said they would kiss someone new right off the bat, but 34% said they'd need a week or two before holding hands. Is that more intimate than kissing? I guess a first kiss is more expected and has a bit more buildup, so maybe that's why it happens first. And holding hands may be more of an innately intimate gesture than you think — it has a lot of psychological effects, including the ability to help ease pain.

Having Sex For The First Time

According to the Match survey, 27% of users wait between a week or two for sex, but around the same amount — 23% — wait a month, so it's pretty spread out and clearly up to preference. Presumably the other 50% wait even less time or longer, further proof that there's no "right" way to do things.

Choosing when to have sex together for the first time really depends on the people involved. “Some people want to wait a bit to get to know the other person in other ways first, and sex is lower on the list of priorities to explore,” Michele Fabrega, a love, intimacy, and sexuality coach, previously told Bustle. “Others want to know early if they have chemistry with their dating partner. I think it's important that people share their thoughts and desires around sexuality even if they aren't ready to act on them yet. This gives both people key information as to whether they might be compatible sexually.” Have sex when you feel comfortable having it!

Getting To The Six Month Mark

A whole lot of milestones appear around the six month mark, according to the survey. Revealing your imperfections comes across at around 173 days, and the first fight tends to happen around 170 days in, along with meeting the parents. Basically it's when things get real. Kudos to all those people who can hide their imperfections for six months, but why would you want to?

Once the six months mark is over then some of the big stuff starts to happen, such as going on vacation together. And everything else kicks off around the two-year mark. The average length before people get engaged is 743 days (so just over two years), then a year later it's marriage (at 1,190 days), and then a year later a baby (1,422 days). The stats show you can go from zero to complete family in four years, which I find sort of encouraging and terrifying at the same time. But like I said, everyone's different, and just because you aren't following this timeline doesn’t mean there’s a reason to panic. You do you.

Overall, these survey numbers are interesting in revealing what an average relationship timeline looks like, but they by no means should act like guidelines. From knowing when to say “I love you” to going a big trips together to leaving a toothbrush at their place, each experience is uniquely timed in every relationship. Whether your relationship lines up perfectly with these numbers or looks a whole lot different is totally up to you and your partner — just know that there is no such thing as a right relationship timeline.

More like this
Expert Tips For Being On Top When You're Plus-Size
By Lexi Inks
How To Do The Intimacy-Boosting Lotus Sex Position
By Laken Howard and Lexi Inks
Why A Relationship Timeline Isn't Necessary For Everyone
By Lexi Inks
Are Leo & Capricorn A Good Match?
By Kristine Fellizar
Get Even More From Bustle — Sign Up For The Newsletter

This article was originally published on Jan. 18, 2016