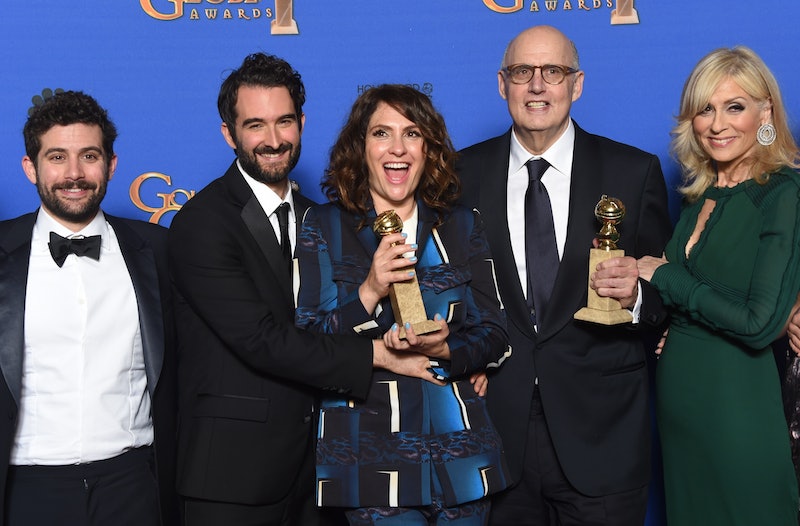 Now that the holidays are over, there's officially something else to look forward to: awards season. And while there's a big event for every major media category — movies, music, and TV shows — the Golden Globes are a breed of their own. Highlighting the best in TV and film, the Globes are a night not to be missed. The award show is often viewed as a way to predict what movies will excel at the Oscars. Another special trait? It's known as the award show where all of the celebrities get drunk. But instead of dismissing it as a bunch of hoopla, there are plenty of reasons the Golden Globes actually matter. Sure, there may be the occasional awkward moments, but there are also important issues, for instance, body-positive victories, that deserve acknowledgment.

When tuning into the Golden Globes on Sunday, Jan. 10, fans will get to see some of Hollywood's biggest and brightest names walk the red carpet. Essentially, it's a giant celebration of the year's best work — along with a few surprises, snubs, and tears. During their memorable acceptance speeches, stars have a tendency to get personal. They also sometimes use the opportunity to promote causes they care about.

Here's why the Golden Globes are worth watching and why it's much more than just drunken celebs in ball gowns and tuxedos. (But come on, you know that's part of the reason you tune in, too!)

1. Beauty Standards Can Be Thrown Out The Window

Tired of the charade of wearing pretty-looking, but painful shoes, Emma Thompson kicked off her heels when presenting at the 2013 show. And why not? There's no need to be in misery the entire night. She even joked that the red bottom of her shoes was from her blood. It may have been unconventional, but it was also pretty rad.

Another empowering example of disregarding beauty standards was Gabourey Sidibe's response to criticism after the 2014 Globes. She stood up to fat-shaming by reminding people that their cruel comments don't even matter, because she has far more important things to focus on. While people are at home dissing her appearance, she's too busy enjoying a ride in a private jet.

That same year, Elisabeth Moss flipped off E!'s mani cam on the red carpet — you know, the one where celebrities strut their fingernails down a mini red carpet. The cameras quickly turned away, but it was a cool gesture nevertheless. Can't hosts focus more effort on the Ask Her More movement, instead of celebrity fingernails?

2. There's A Chance To Spotlight Causes That Matter

When giving acceptance speeches, celebrities have the opportunity to spark social change, or at least open people's eyes to important issues. In 2015, Jeffrey Tambor won a Golden Globe for his role in Transparent and dedicated the trophy to the transgender community. He said,

That same night, Transparent's creator Jill Soloway dedicated her award to the memory of trans teen Leelah Alcorn and "too many trans people who die too young." These weren't the show's the only meaningful moments that year. In response to the Charlie Hebdo terrorist attack, Hollywood Foreign Press Association president Theo Kingma took the opportunity to show solidarity with those in France. He told the crowd, "Together we will stand united against anyone who'd repress your speech." George and Amal Clooney also backed this cause, wearing "Je Suis Charlie" buttons.

When accepting an award for "Glory" from the movie Selma , Common also took the opportunity to comment on worthwhile social issues. Highlighting the work that's been done and still needs to be done when it comes to civil rights, he said, "The first day I stepped on the set of Selma, I began to feel like this was bigger than a movie... Selma has awakened my humanity." So powerful!

3. Celebrities Aren't Afraid To Open Up Or Get Emotional

In 2013, Jodie Foster inadvertently gave a coming out speech when accepting her Cecil B. DeMille Award. She began by saying, "I have a sudden urge to say something that I've never really been able to air in public." But instead of going the route everyone expected, she declared she's "loud and proud" about being single. She then said she was kind of kidding and that hopefully people weren't expect a coming out speech, because she already did that "back in the Stone Age." It was a bit of a confusing message, but still awesome that she embraced her identity — regardless of what that may mean.

Another emotional moment? When America Ferrera won an award for Ugly Betty in 2007. This was her first major award and she told the audience through tears,

It's such an honor to play a role that I hear from young girls on a daily basis that it makes them feel worthy and lovable and they have more to offer the world than they thought.

Her heartwarming speech highlighted just how deeply she cared about the role and what it meant in the grand scheme of things, as far as disproving beauty standards and embracing self-love.

4. The Social Commentary Pushes The Envelope

Although people may be on the edge of their seats about the fact that Ricky Gervais is returning to host this year's show, the fact that he has the freedom to share his (sometimes cringeworthy) jokes says a lot about the Golden Globes' openness. (For example, his Scientology joke from 2011.) Tying into this trend of pushing the envelope, Tina Fey and Amy Poehler didn't shy away from tackling serious topics during their time as hosts either. In their 2015 opening monologue, they acknowledged the allegations against Bill Cosby. Poehler said,

In Into the Woods, Cinderella runs from her prince, Rapunzel is thrown from a tower for her prince, and Sleeping Beauty just thought she was getting coffee from Bill Cosby.

Of course, other award show hosts make jokes, but the Globes has a history of hitting the nail on the head. Definitely an upgrade from when Seth MacFarlane sang an entire song called "We Saw Your Boobs" at the 2013 Oscars.

It's not always the big names that get recognized at the Globes. Instead, sometimes underdogs win, and rightfully so. Remember when Jennifer Lawrence beat out Meryl Streep in 2013? The Silver Linings Playbook star joked about that particular accomplishment, but the humor was lost on the audience. People assumed she was bragging about how she "beat Meryl,"when really it was an obscure movie quote. Yikes! Regardless, it was an impressive feat, since Streep has won the most Golden Globes of all time.

Another example of a well-deserving newcomer stealing the spotlight happened when Gina Rodriguez took home the Best Actress in a TV Comedy trophy for Jane The Virgin in 2015. She was up against Golden Globes vets like Julia Louis Dreyfus and Edie Falco. In her speech, Rodriguez acknowledged what a milestone moment this was. She said,

Although nothing's perfect — for example, there's still work to be done in terms of diversity when it comes to the Globes — it's moments like these that make the show worth watching and prove it's a powerful night of television.