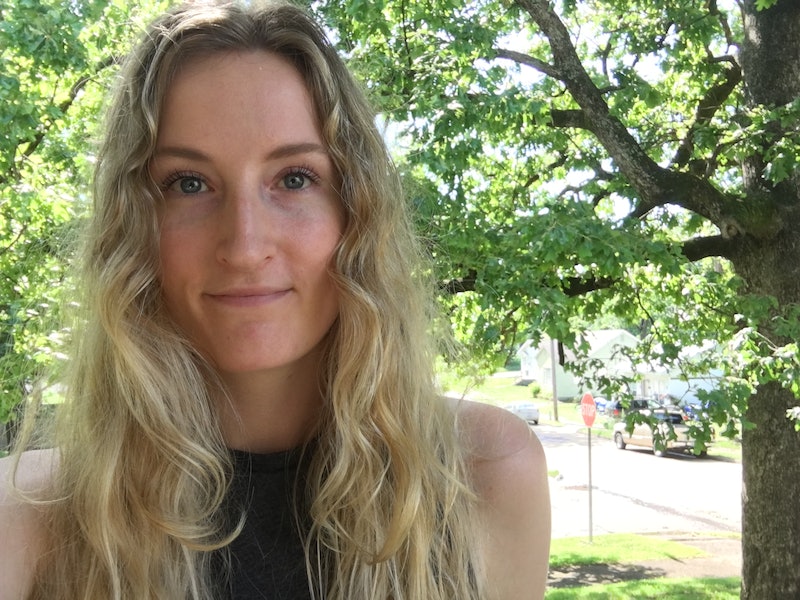 Since I waited to have sex until I was 21 years old, most of the things I wish I had known before I had sex for the first time have very little to do with the physical mechanics of first-time banging. I was a junior in college before I felt ready to have sex, so it's not like I didn't have plenty of time to do my research. Of course, my first time did come with a couple of surprises.

For starters, I had to hop on top just to get it in, and for some reason, I didn't bleed at all until the second time I had sex. Fortunately, though, I was well-informed, and I knew I would need my first sexual partner to warm me up with his lips and fingers before we got to the main event. I knew that, even after plenty of foreplay, having penetrative sex for the first time would still probably hurt. I knew my then-partner and I were going to have to go slow, douse my vagina with lube, and have non-expired condoms at the ready. Plus, since I was the last person in my friend group to get laid, I knew from their experiences that, typically, girls only orgasm during first-time sex in books and movies.

What I didn't know before I had sex was this: Having sex for the first time shouldn't make you feel like you're losing anything, and it definitely shouldn't make you feel like you're bound for life to the first person you have sex with. Unfortunately, thanks largely to my deeply religious upbringing, society's tendency to slut-shame women from girlhood, and my own insecurities, I placed way too much value on my first time.

Don't get me wrong — I think I'll always look back on my first sexual experience with a man fondly, but there are still a few things I wish I'd known before I had sex.

I grew up in a fundamentalist Christian home, so I was raised to place an unhealthy amount of value on my virginity. I was told by my parents and Sunday school teachers alike that my virginity was a "precious gift," and that it was my responsibility to save myself for my future husband. In high school, my parents even gave me a purity ring — which I reluctantly wore — to remind me that "true love waits."

Fortunately, none of this kept me from enjoying my first time. By the time I finally decided to have sex at 21, I had mostly abandoned my religious upbringing, so I didn't feel an ounce of guilt about having sex outside of the covenant of holy matrimony. I did, however, feel like I'd lost a valuable piece of myself. A part of me, however small, worried that I'd made myself less desirable in some way, and I really wish I hadn't felt that way.

I mean, having sex for the first time is kind of a big deal for most people, and that's not bad or unnatural. Unfortunately, most girls, whether they grew up in a religious home or not, are raised to think of their virginity primarily in the context of how it can please other people. We're taught to think of our virginity as though it doesn't belong to us — as if anyone we sleep with after we're "deflowered" is being robbed of something they could have had. Sadly, this widespread, cross-cultural mentality often shines a negative light on what should be a very positive experience.

2. Missionary Isn’t Always The Best Position To Start Off In

After a few extremely painful minutes of trying to have sex in the missionary position, my ex suggested that I get on top of him so gravity could help us out. I thought literally sitting on his penis would only make things more painful for me, but I was pleasantly surprised to find out that it actually made things so much easier for both of us. It still hurt, but not as much as missionary had — plus, being on top allowed me to feel more in control of the situation. I would definitely recommend girl-on-top to any virgins reading this.

3. Losing Your Virginity To Someone Doesn't Mean You're Bound To Them For Life

I knew I wasn't obligated to spend the rest of my life with the first person I slept with, but since I'd spent most of my life believing sex is sacred, I felt like I needed to exhaust every effort to make things work with the first guy I had sex with. I also felt like he would value me in a way that another man wouldn't, because he was my first. It was an extremely unhealthy mentality to have, and it's one of the reasons I stayed in a toxic relationship for years. In fact, it's only been in the past 10 months since I broke up with my ex that I've realized having sex with someone, even if they were your first, isn't really what bonds you. Love, mutual respect, and friendship is what truly bonds you to someone.

To be fair, I loved my ex a whole lot, so I might have stayed in that relationship for too long even if I'd grown up in a sex-positive home. That said, I do wish more people had told me not to take that first-time-bond so seriously — because I really don't think I would have put up with him for as long as I did if that had been the case.

4. If Your Partner Is Considerate, The Pain Should Be Bearable

Like I said, my first time hurt a lot, and I think that's probably the case for most women when they have penetrative sex for the first time. That said, I feel like it's unhealthy, unnecessarily frightening, and the complete opposite of sex positive to tell girls that their first time is going to be excruciatingly painful.

Don't get me wrong; I'm grateful other women warned me that my first time was probably going to hurt. But it would have been nice if more than one person had told me that if you have lots of lube on hand, and your partner isn't a total jerk and wants to give you pleasure, the pain should be totally manageable.

I grew up thinking my loss of virginity would result in a significant amount of blood-loss. I figured, at the very least, getting my cherry popped would ruin my sheets. For whatever reason, though, I didn't bleed at all until the second time I had sex. Even then, it was maybe two tablespoons of blood at the most.

6. Your First Time Probably Won't Be As Romantic As You Hoped It Would Be — And That's OK

As far as first times go, I think mine was pretty great. I mean, it hurt, but I was in love, I didn't feel pressured or scared, and it all went down from the comfort of my own apartment. Plus, my ex was gentle, he took his time, and I was totally ready.

My first time could have been a touch more romantic, though, and I felt kind of bad about that initially. There wasn't any sexy mood music, and the first-time-candlelight I'd always envisioned was nonexistent, because I couldn't find a lighter. (A fact that I find incredibly curious in retrospect, because my ex and I had smoked earlier that night.) On top of that, our rhythm was hilariously off most of the night, and I wound up with a UTI just days after I'd decided to become sexually active, too.

It's OK, though, because I know now that your first time isn't supposed to be perfect. It just has to be what you want to do. (Though you should also probably pee when you're done.)