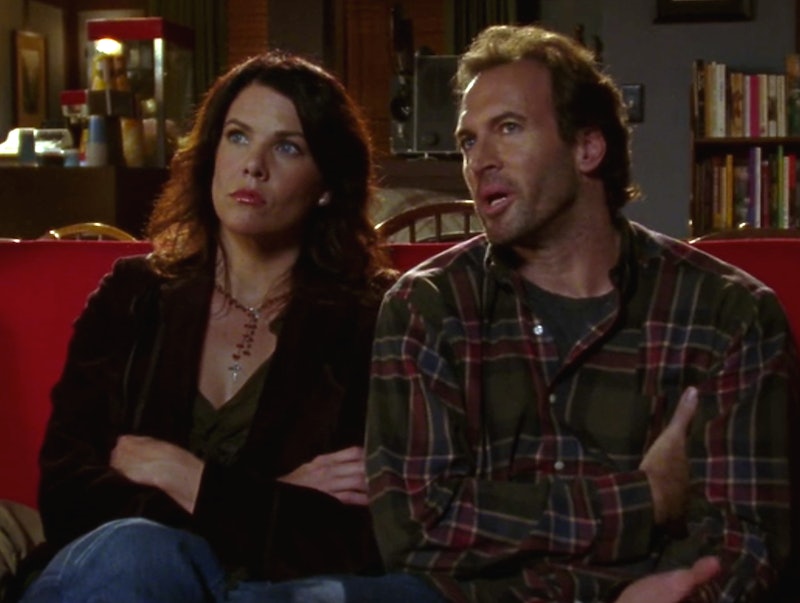 The Seven Brides for Seven Brothers reference Lorelai made to Luke in Season 1 will probably always be my favorite, but there are plenty of less obscure pop culture references in Gilmore Girls . In its original seven-season run from 2000 to 2007, Vulture counted that there were an astounding 811 references to movies, TV shows, songs, and bands made in the beloved show. Obviously, time was not kind to all of these allusions — or in the case of Seven Brides for Seven Brothers, time wasn't kind even when Lorelai first uttered the one-liner — yet, miraculously, some Gilmore Girls references have managed to stay relevant in the nine years since the last episode aired.

Although it's usually more fun to look at how poorly some of Lorelai and Rory's jokes have aged, sometimes the women and their Stars Hollow crew were ahead of their time. When I marathoned the entire series for the first time recently, I found myself Googling many of their references in an attempt to be as marginally quippy as Lorelai. The show always managed to drop some references that made you realize that the Gilmores are much cooler than many of us could ever hope to be, while others you'd have to be living under a rock not to get. And then there is a whole other category of references that are frighteningly on point — even in the year 2016.

As the Netflix revival Gilmore Girls: A Year in the Life is bound to bring plenty of more pop cultural references to obsess over when it premieres (hopefully?) this year, here are 15 from the original series that have managed to still resonate today.

Lorelai's reference to the Menendez brothers during the Gilmore Girls pilot is particularly topical when you consider that Dick Wolf is following in the anthology footsteps of Ryan Murphy with the upcoming Law & Order: True Crime focusing on the brothers.

When Lorelai got suckered in to helping the Booster Club at Chilton with a fashion show in Season 2, Rory astutely observed, "My mom's a model. Maybe you'll get to date Leonardo DiCaprio now." This fantastically holds true 15 years later. C'mon, Leo! Can't you give some women in other fields a chance?

4. The Princess Bride: Helping Guys Make An Impression Since 1989

No matter your feelings on Jess, this cool guy knew that quoting Westley's line of "As you wish" from the adventure rom-com The Princess Bride would always help win over a love interest.

Lorelai's David Bowie references became devastatingly ironic after the musical icon died in January 2016. When Lorelai decided to cancel her Bowie concert date with Don Draper ... I mean Jon Hamm ... I mean Peyton Sanders, she told Rory, "I'll catch Bowie the next time he does a farewell tour." But will you, Lorelai? Will you?

6. The Realization You're Turning Into The Edies Of Grey Gardens

The documentary Grey Gardens understandably continues to fascinate the public as it did the Gilmore girls (who appear terrified at the prospect of becoming Little Edie and Big Edie) — in part because of the 2009 HBO movie with Drew Barrymore and Jessica Lange and IFC's current spoof series Documentary Now! in which Bill Hader and Fred Armisen lampooned the two Edies.

7. Obnoxious Hieroglyphics: The Precursor To Emojis

The symbols used in e–mails might not have technically been emojis when Season 4 of Gilmore Girls aired — not to mention Lorelai and Rory's terminology was knowingly and hilariously off — but those "cutesy symbols" are bigger now than ever before.

8. "See You When Hillary's President"

Lorelai Gilmore, you fortune-teller, you. She made this Hillary Clinton prediction three years before Clinton's first run for president. But what's even freakier (since who didn't know Clinton was going to run for the 2008 presidential election?) is that Clinton currently has an even better chance of being named the next president right around the time Gilmore Girls: A Year in the Life could premiere on Netflix. See you when Hillary's president, indeed.

No, Lorelai. Always and forever, my answer will be, "No." #ShowgirlsForLife

With Star Wars movies being pumped out on the regular again, Luke's rant about Star Wars: Episode III – Revenge of the Sith is beyond applicable to today's fandom. However, what I find to be the most poignant is Lorelai's comment that Luke should, "Go on a website or something, OK? Cause there are thousands — no, millions — of your kind out there debating all the minutiae of, not just this Star Wars movie, but every Star Wars movie!"

11. My Name Is Alexander Hamilton

Before Lin-Manuel Miranda's musical Hamilton hit Broadway, the inexplicably British DAR member Nora (aren't they the daughters of the American Revolution?) revealed over cocktails that she thinks the greatest lover out of the founding fathers would have been Alexander Hamilton. Now, thanks to Miranda, many other people would choose "the stud on the 10" as the sexiest founding father too.

Despite the advice Rory gave to her mom, Lorelai and Luke did not end up staying together just like Gwen and Gavin (hey! that's the name of the episode!) after Luke discovered he had a daughter. However, while Gwen Stefani and Gavin Rossdale were together during Season 6 of Gilmore Girls, nowadays, they are divorced and Stefani has moved on with her The Voice costar Blake Shelton. Maybe Rory jinxed Stefani and Rossdale, but her words shouldn't have had an unintentional lasting negative impact on Lorelai and Luke since I'm expecting big, romantic things from these two in the revival.

13. Lorelai's Love Of The Purple One

Prince's Purple Rain (song and movie) got three shout-outs throughout the run of the series, but my favorite is when Lorelai unloaded onto therapist Carolyn (Jan from The Office!) after a Friday night dinner at Emily and Richard's. Like the Bowie reference, Lorelai's adoration of Prince is particularly painful ever since he died in April 2016.

Lorelai's face really says it all when Logan starts talking about Second Life and World of Warcraft to her, but Rory's boyfriend was pretty spot-on since people have continued paying real money to play online games. Plus, Warcraft — the movie based on the franchise — came out in June 2016. And if you want to really bring the Gilmore Girls references full circle, David Bowie's son is the director of Warcraft .

15. Pretty Much Everything In Lane's Music Collection

While some of the musical references in Gilmore Girls don't stand the test of time, Lane pretty much always knew what was up when it came to musicians (ignore the fact that Lane loves her CDs). Yes, maybe her White Stripes-inspired wedding cake with Zack is a bit dated, but her love of Nico, Led Zeppelin, The Clash, and Joy Division is pretty timeless. (She even got to hang with Carole King.) My personal favorite reference of hers? When she plays two songs by Rilo Kiley to see if there's a difference in the music quality after Jenny Lewis and Blake Sennett's relationship ended. Rilo Kiley may be broken up, but Jenny Lewis is still relevant AF.

Even those these references have maintained some edge over the years, that doesn't mean that fans are not ready for a boatload of more relevant ones to come when the revival premieres on Netflix. But hey, just because I embrace the timeless jokes of Gilmore Girls doesn't mean I'm not pumped for a fresh batch of utterly outdated and wacky references (like, say, referencing a musical about mountain men?), courtesy of Lorelai and Rory.