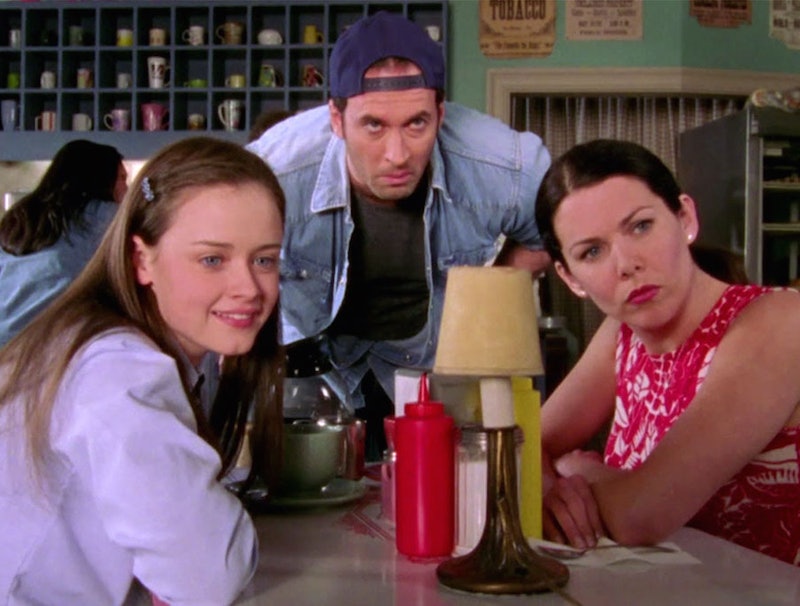 With so much buzz about the upcoming Gilmore Girls revival on Netflix, I knew that it was time for me to finally watch the show I had heard so much about over the years. I watched all seven seasons of Gilmore Girls on Netflix over the span of two months and completely immersed myself in the lives of Lorelai and Rory Gilmore. I went through the roller coaster that is Gilmore Girls and my significant other became a little concerned for my well-being during my marathon since there is apparently such a thing as watching too much Gilmore Girls in too little time — let's just say things got emotional. So for anyone considering watching Gilmore Girls for the first time or who wants to reminisce on what they felt like when they first visited Stars Hallow, I'm here to share all of the phases of watching Gilmore Girls for the first time. And yes, you will find yourself subconsciously singing to Carole King at some point.

While I had caught parts of an episode or two when it first aired, considering that I am close to the same age as Rory, it's surprising that she wasn't a bigger part of my life growing up. Now I'm closer in age to Lorelai, which I'm sure completely changed how I interpreted the series as I definitely related more to the mom than the daughter. But the intriguing moments of Gilmore Girls I do remember catching when it originally aired were all about Luke and Lorelai, so who knows (I'd consider myself more of a Lorelai anyway). Regardless of who was more relatable out of the two leading women, through their multitude of conversations my coffee cravings spiked and I learned just why this series is so beloved by so many women my age.

Of course, just like the lives of the Gilmore girls, my marathon wasn't always full of parades and snow. Here are just 16 phases I went through while watching Gilmore Girls for the first time. Although I had plenty more feelings than just these 16, unlike Lorelai, I sometimes know when to cut myself off.

The show is called Gilmore Girls, so I knew to expect positive female voices and stories, but I was still taken aback at how well Gilmore Girls conveyed the female experience and thought process. Even if you aren't like Lorelai or Rory, the portrayal of two complicated, smart, and funny women was something I honestly don't think I have ever seen on TV or in film before. In a landscape where many movies still can't pass the Bechdel test, Gilmore Girls blew it out of the freakin' water since the show is all about women talking about everything — men included. Yeah, there were great male characters on the show, but at its heart, the show truly was all about those Gilmore girls.

C'mon, man. How many times must you accidentally impregnate someone before you learn your lesson? Come to think of it, I guess this really is the fault of the people behind the scenes since the series used unplanned pregnancies to not only impede Lorelai and Christopher's relationship, but also Lorelai and Luke's relationship with Luke's surprise daughter — April Nardini.

3) Wanting To Live In Stars Hollow

With all of its festivals, meddling residents, and quaint shops, who wouldn't want to live in Stars Hollow? The only downside is when you need to eat after a breakup, Doose's Market and Luke's Diner are no longer reasonable options.

There's only so much flirty banter at the diner that a fan can take before you need them to seal the deal, you know?

5) Having Complex Feelings About Rory

I went through many iterations of this particular stage since I often felt we were told how amazing and wonderful Rory was without really showing it. But it reached its peak when Rory decided to quit Yale, stop speaking to her mom, and live in her grandparents' pool house. Good to know that when the charmed Rory is faced with one little setback (Mitchum Huntzberger telling her she doesn't have what it takes to be a journalist), she thinks the appropriate response is to steal a boat and quit school. For someone as motivated as Rory is supposed to be, this move made absolutely no sense and filled me with rage.

Before Jess lovers everywhere freak out, please note it was just a phase since I do think Jess and Rory have the strongest connection out of any of her boyfriends and should probably end up together. Though in the spirit of full disclosure, I must say that I think I watched at too old of an age to really care about whether I am a Dean, Jess, or Logan person. In the spirit of GG fandom, I guess I'd personally be an OG Dean girl, but I get what all the Jess fuss is about. However, he was such a jerk when he lived in Stars Hallow that it was unbearable. Of course, he grew up to fulfill his literary potential and ended up being a man worthy of Rory's affections, but his bad boy persona was just obnoxious before then.

7) Being So Over All Of The Engagements

No wonder there's a wedding in the revival — Gilmore Girls can't help itself when it comes to engagements and weddings. It started with Max Medina in Season 1 and went all the way to Logan in Season 7 with Dean, Lorelai, Christopher, Luke, Zack, and Lane all being prematurely or ill-advisedly engaged or married at some point — and sometimes more than once. The only people who should have gotten married in Gilmore Girls were Sookie and Jackson and perhaps Liz and T.J. but just because their wedding brought Lorelai and Luke together — everyone else clearly needed to work on their relationships first.

8) Wondering Why Anyone Is Even Nice To Certain Characters

While this doesn't solely pertain to Rory's Chilton nemesis turned Yale roomie, how on earth did Rory and Paris stay friends for all seven seasons? I like strong female characters as much as the next gal, but when she stops being a decent friend to Rory, she doesn't deserve such a prominent place in Rory's life. Paris went through some times when she was really not a good friend to Rory, then awesome, and then pretty awful again — she's lucky Rory kept being a good friend in return.

9) Asking If The References Can Get Any Better?

With such an abundance of pop culture references, there's truly something for everyone. When Rory, Lorelai, or Lane go off about one of the many books, movies, or bands they love and you happen to have a personal connection to it, it's true bliss.

One of my favorite things while watching was spotting famous faces that weren't so famous when they were on Gilmore Girls , plus seeing what else those actors have done since Gilmore Girls. I counted four actors that would end up on Mad Men, including Alexis Bledel and Jon Hamm (obvi), as well as Danny Strong and Abigail Spencer. Lorelai would be proud.

11) Saying Goodbye To Some Great Characters

Chad Michael Murray, Adam Brody, and Jared Padalecki had very unceremonious goodbyes before popping on other TV shows. Dean's exit was the most troubling since when Padalecki left he parted on a depressing note and was never seen in Stars Hollow again.

12) Thinking Emily Has Gone Too Far This Time

I adore Emily Gilmore, but that doesn't mean Lorelai wasn't right to sometimes (but not all the time) keep her at arm's length. Perhaps the worst case of Emily overstepping was when she meddled between Luke and Lorelai and invited Christopher to her wedding vow renewal, but the show was full of examples of how infuriating Emily can be.

13) Knowing The End Of Lorelai & Luke Is Imminent

Although Luke is Lorelai's endgame (nothing can shake me of this core belief), I knew deep down that the series would not keep Luke and Lorelai consistently dating all the way to the series finale. But that didn't make watching their long downfall in Season 6 any easier.

14) Doubting My Ability To Go On

The incessant dialogue that goes down in Gilmore Girls is enough to make even the most devoted fan go a bit mad when marathoning. After watching over eight hours of Gilmore Girls in a day, your once positive thoughts toward Lorelai's witty and verbose responses turn dark and you realize a break is in order. But with a short time off and a good cup of coffee, the frustration will pass before you know it.

15) Wondering If It's OK To Wish Ill On The Gilmore Girls?

The only real drama that happened in the lives of Lorelai and Rory was usually self-imposed. Financial hardships were never actually a thing for them since they always had the security blanket of Richard and Emily, then Christopher and Logan. Even if she didn't get her coveted New York Times fellowship, Rory was handed a job at the end of the series and never met a person who wasn't willing to compliment her brains and beauty. By not communicating openly and acting out, Lorelai ruined adult relationships and she could be a real Carrie Bradshaw when it came to Sookie's problems. I know it's tough love, but I think the Gilmore women would have benefited from experiencing some real failure or rejection.

While a good rant about Gilmore Girls is good for the soul (yet again, I think Lorelai would be proud), that doesn't take away from how much I loved the series. After seven seasons, I had become so involved in the lives of Lorelai and Rory that I nearly forgot why I had started watching in the first place — so I'd be all caught up by the time the Netflix revival is released. While watching all 153 episodes of Gilmore Girls in two months had its ups and downs, the characters Lorelai and Rory will always be with me. Although I haven't earned the revival like fans who watched the series when it originally aired have, I'm thrilled to be able to see these women sooner rather than later and watch the series end on Amy Sherman-Palladino's terms. And when all was said and done with my Gilmore Girls marathon, one thing was for sure: I've been Gilmored.

And I wouldn't want it any other way