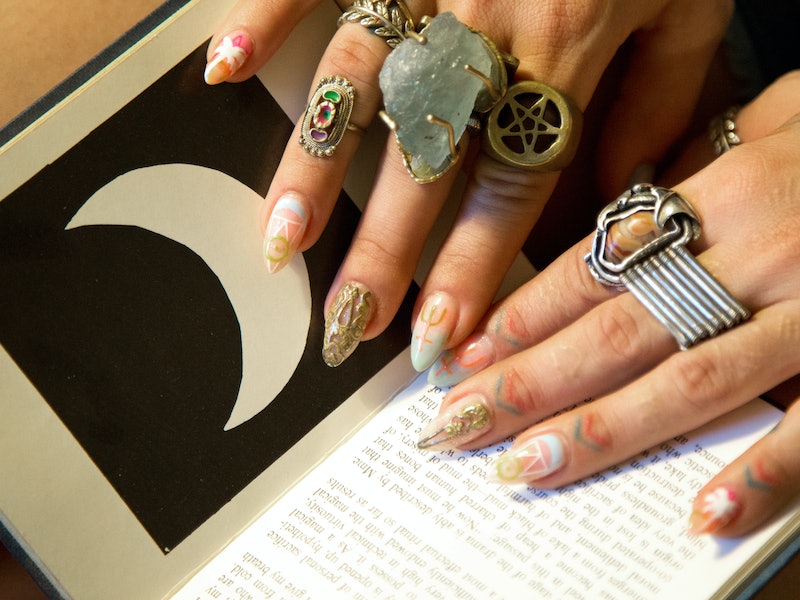 Checking in with your local astrologer and discussing your zodiac sign is a longstanding and culture-spanning tradition. It seems there's a reason why astrology hasn’t gone anywhere. This perma-trend is consulted by the casual and devoted alike. With varying degrees of seriousness, people all over the world read their horoscopes daily. Despite being mainstream-ish, the wider acceptance of astrology as more than a witty blurb in a printed paper is also growing. Apparently we can't get enough of the purported advice of the stars.

Being true to your personality is a huge part of the message of astrology. Some find confidence and success easier to come by when they pinpoint their inner desires, according to a forecast or not. By aligning your personal style to that perceived path, you may find life an easier climb.

When you’re living according to your sun sign things can feel more illuminated. Matching your nail art to your sign gets the horoscope vibes on the go, both pleasing your planetary alignment and looking pretty doing it. There’s no reason you shouldn’t consider your astro sign in your adornment choices. Take the idea of the birthstone to the next level by matching your nail art to your zodiac sign!

Goddess of hand painted nail art, Arielle Mosses and I collaborated on these 12 nail looks to appease every sign under the sun, moon, and stars. You’ll want to run to your nearest gel purveyor to get your own!

Aries are best known for their action as leaders, turning the world as the first sign in the astrological spectrum. With nails kept short, the Aries remains ready for action. Choosing shiny neutral colors is recommended for the loner in every Aries, who needs space to get their goals set. Mosses added forward pointing triangles to symbolize the Aries pushing ever on.

A beloved sign by many, Taurus' mortal desires are often shared by complementary signs who value emotional expression and patience. A Taurus would be likely to have medium-length nails to show off their personal style without getting in the way. Choosing a nude color draws attention to the artwork, a hand-painted eye at the base of the nail that symbolizes protection from the emotions of others.

Sometimes painted as duplicitous, what Geminis truly portray is adaptability. A Gemini is governed by their own logic and is not shy about it. Quick to clap back at any slight and smart enough to make it hurt, the Gemini is a loyal friend who will tell you the truth. Medium length nails keep the two sides of the Gemini brain from having to settle for short nails or get frustrated with too-long nails, and a sheer skin tone base allows them to grow out their look until they fancy a fill. A popular nail look is color blocking and hand-striping, which Mosses adapted to suit the fickle-for-a-reason Gemini mood.

Crabtastic Cancers are natural empaths who can sometimes internalize the moods of others. They’re lunar led with a need for short nails to accommodate their frequent rescues of others. Cancers do the emotional labor of others and can become avoidant if over-tested, their nails should be simple and not distracting for their daily lives. Mosses swooped a stripe of metallic gold over gelly gray shades from mixing White and Black Bio Seaweed Gel with clear.

Mystical Leo has an inner world on fire, ruled by the sun. Leos approach life like an ice breaker ship, their personality type is going to be expressed whether the listener is ready for it or not. A Leo needs to be on guard so short, neutral nail colors are their friend. Gossipy but genuine, the Leo got assigned some fantastic #OOTD Nail stickers in Hollywood Valley Girl from Sokoglam with Barbie and Ken heads galore!

The Virgo’s self-constructed world of metered perfection can be hard to break into. They live by routine, social networks, and thrive as the life of the party or the office hardass. Virgo is mercurial and needs other people’s friendship but never approval. Virgo will have their nails as long as they please and employ healing, soothing, colors to their perfect manicure. For this look, Mosses outlined a shimmering gelly blue with Red Carpet Manicure’s Sea Cloud Cruise.

Flow in and out of life with the moody Libra. Artistic but meticulous, a Libra likes to be flashy but only in their own way. Always sticking to their personal aesthetic, Libras value beauty above most things. Having long nails for the sake of fashion is definitely a Libra move, and they would most likely choose a base color that lets their nails shine through, while adorning it with something delicate and gorgeous, like AlleyCat Nail Jewels.

Ah, the oft misunderstood Scorpio. Their passion can be boundless, and when misguided, tragic. A Scorpio is most powerful when properly devoted to the cause of greatest regard to their inner self. Ruled by the sun and moon in tandem, triangulating their self worth and importance with their output is the keystone to their happiness, and it’s now expressed on a long, elegant nail design. Painting a pastel yellow sun sign with Red Carpet Manicure Pineapple Premier and resting it on glitter gelly, the balance is struck between those two heavenly bodies.

Sagittarius rhymes with hilarious and that’s no mistake. Darkly comedic and driven by their impulsivity and blunt honesty, the Sag is a living emoji. Savage Sag's should let that flag fly, in life and on their well manicured nails.

Capricorns are seen as uncomplicated but still success oriented. Their nails can be long since they avoid work without status and would definitely be down with long almond nails. The Capricorn would be rocking some type of Miami, sunset cocktail inspired mani.

Socially conscious Aquarius doesn’t lead the charge but fills the ranks with their willingness to change the world. They probably work for the greater good where shorter nails are a must, but indulging in a spot of nail art wouldn’t be out of bounds. The Aquarius likely wears a uniform (official or not), so choosing this dusty gray camo is a tip to their practicality.

Ruled by Neptune, the Pisces is highly emotional. Whether they express it or not, they feel the weight of the world. Pisces needs to learn to go with the flow, to let feelings be a guide and not a hindrance. Their nail art should be soothing like an aquamarine ocean. Arielle created a dreamy ombre with Red Carpet Manicure Yacht Hopping over a custom pink gelly. The super long nails add to the Pisces’ mystery, their most important accessory.

Whether you’re just a casual ‘scoper or you salivate waiting for the Susan Miller report every month, you should consider matching your moon mood to your fingernails.