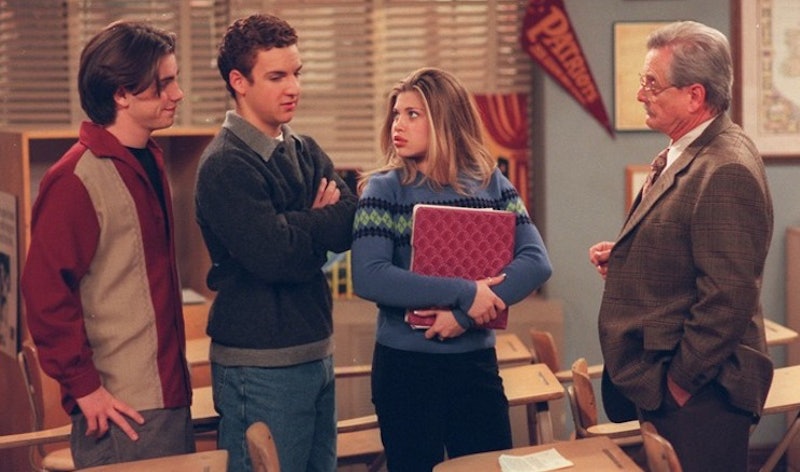 When we reflect back on life in the '90s, there is plenty of goodness to appreciate — like, for example, all of the unexpected feminist moments of the '90s. Sure, we talk a lot about how amazing TV shows were in the '90s, or how much we loved all the classic movies of the '90s, but less often do we talk about how feminism factors into so many of the things we love. And it is there, even if you sometimes have to look a little harder to see it. Feminism is constantly growing and evolving, but it can be really enlightening to look back on the media we knew and loved during our youth and see where feminism burst in unexpectedly.

Of course, it's valid to point out that feminism has its shortcomings. For example, I've noticed myself that much '90s feminism isn't the best at being intersectional, or that it tends to speak to only certain audiences and demographics. It's good and important to point out where feminism is problematic, or when it's failing to be inclusive.

Still, it's super fun to look back and examine feminism in the '90s, for all of its successes and short-comings. These moments definitely helped feminists who came of age in the '90s become who we are today.

1. The Success of The Spice Girls

OK, we all know and love the Spice Girls, but we sometimes take for granted just how empowering their success actually was. All-girl groups existed in music before them, of course, but until their success in the '90s, our music at the time was very dominated by "boy bands" and solo musicians. Seeing a group of young women succeed together sent the message that it was possible for women to boost each other up all on their own.

2. The Olympics Ruled To Include Women In All Sports

In 1991, The International Olympics Committee (IOC) ruled that all new sports in the Olympics had to be dual-gender. Basically, this means that sports had to feature games for both men and women. Pretty important, right?

Jesse and Becky were decidedly side characters in Full House, but they had some great feminist moments in their relationship. Remember when Becky was pregnant and she made Jesse wear a giant belly so he could understand her perspective? Talk about being ahead of its time.

Topanga had plenty of feminist one-liners throughout the entire series, but she had some particularly feminist ones about self-acceptance and body positivity. These sorts of subtle feminist messages definitely resonate even now.

For '90s TV, it was pretty surprisingly feminist to see a positive portrayal of same-sex parenting throughout an entire series. That's right: Ross's ex, Carol, and her partner Susan raise their child together. While Ross has all sorts of complexes about being divorced, no one ever questions if it's "acceptable" or "right" for Ben to have two moms.

6. The Female Friendships in Clueless

Sure, Clueless is mostly about relationships (and fashion), but it's also a wonderful depiction of supportive female friendships. All the girls support one another without cattiness or back-stabbing. It's wonderfully refreshing!

7. The Unstoppable Drive in Romy and Michele's High School Reunion

While Romy and Michele's High School Reunion is decidedly a comedy, it has plenty of feminist messages under the surface. For example, just think about how hard Romy and Michele work to get where they want to be. They are super driven and focused on the success they want and how they plan to get it. And their super loyal, super secure female friendship is just icing on the cake.

8. The Brilliance of Destiny's Child

At this point, a lot of discussion of Destiny's Child in the context of a launching point for Beyonce. But when their first album came out in the late '90s, it was pretty big for feminism. Their songs were all about empowerment and girl power (as many of them still are in their solo careers), and the fact that these girls had been together since they were kids is pretty feminist in itself. All about female empowerment and supporting other women, right?