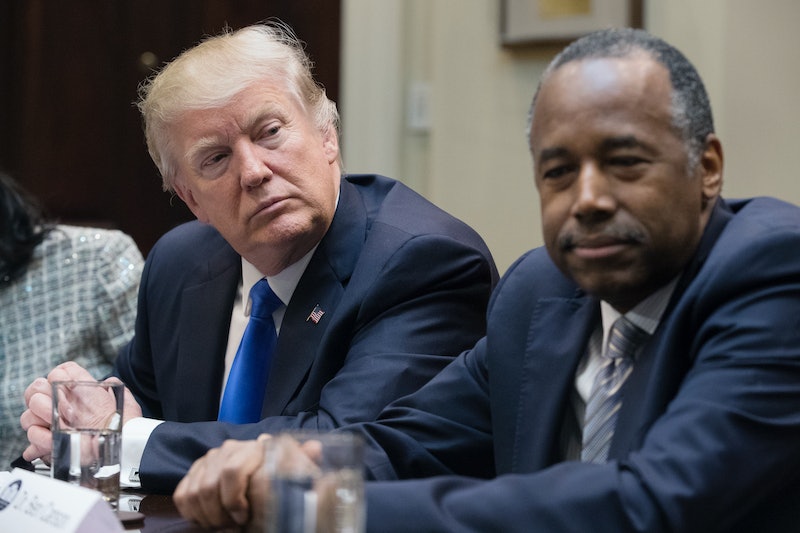 For two years, I taught some variation of English Language Arts to eighth graders and tenth graders. As I conducted Socratic Circles, an assessment that allows students to exchange ideas about injustice and inequality, and led students through the recipes and symbolism in Like Water for Chocolate , I consistently used history to guide my lessons.

Malcolm X and Martin Luther King's speeches helped me explain sustained activism to 13-year-olds. I contextualized Like Water for Chocolate by devoting entire lessons to the role of Soldaderas during the Mexican Revolution. We explored Black and Latinx history every day, rather than restricting it to one month midway through the academic year.

History empowers students. It gives them context for their work and makes them proud of their heritage. President Donald Trump hasn't received that memo.

Trump held a Black History Month event at the White House on February 1. Omarosa Manigault, Ben Carson, and Don King attended alongside other Black Trump supporters. In his statement to the crowd, Trump said "During this month, we honor the tremendous history of African-Americans throughout our country," he said. "Throughout the world, if you really think about it, right? And their story is one of unimaginable sacrifice, hard work, and faith in America."

Trump started off well, but then veered into uncomfortable territory. His observation of Frederick Douglass, in particular, raised more than a few eyebrows.

"I am very proud now that we have a museum on the National Mall where people can learn about Reverend [Martin Luther] King, so many other things," he said. "Frederick Douglass is an example of somebody who's done an amazing job and is being recognized more and more, I noticed."

Douglass died in 1895, though his historic contributions, which included working to abolish slavery and Jim Crow legislation, have long outlasted his life. Yet, Trump framed Douglass as someone who's still alive and garnering renewed recognition, raising questions as to whether or not Trump has any idea who Douglass is. Similarly, press secretary Sean Spicer couldn't clarify exactly what Trump's comments about Douglass meant, especially since his remarks were so vague.

Both of them appear to be clueless about who Douglass was, the significance of his work, and what he devoted his life to undoing. Their lack of knowledge about the famed abolitionist proves the lingering importance of Black History Month. Like Douglass, many Black heroes are forgotten and erased in the white imagination.

Take Katherine G. Johnson, Dorothy Vaughan, and Mary Jackson for instance. The three mathematicians were instrumental in getting America's astronauts to space, but their contributions to the space race were never taught in school. It took a book, and the movie Hidden Figures , to illuminate their stories. The success of Hidden Figures prompted comedian Leslie Jones to discuss several other obscure Black history stories on Saturday Night Live .

Women are often erased from the larger Civil Rights Movement narrative. For instance, Parks worked with the NAACP to document sexual assault against Black women long before King became an activist. Yet, her activism has been reduced to her arrest for refusing to relinquish her bus seat.

Similarly, 60 Black women stormed the Department of Justice in 1951, four years before the start of the Montgomery Bus Boycott, to demand the release of falsely imprisoned Americans, including Rosa Lee Ingram. The 60 Black women were members of the Sojourners for Truth and Justice, combined Communist Party ideals with Black nationalism to create "Black left feminism."

Their organizing efforts are never acknowledged during Black History Month, which is exactly why it still matters. There's so much of Black History that's left unexplored, especially in a political moment where Trump's administration, including White House chief strategist Steve Bannon, the former editor-in-chief of Breitbart, are perpetuating a white nationalist agenda — one that excludes Muslims and questions Black Lives Matter and enacts policies that will disproportionately disadvantage people of color.

Allowing white men, who comprise the bulk of Trump's cabinet, to dictate who is and isn't deserving of commemoration is unacceptable. After all, he doesn't even know that Douglass died. Black History Month matters now more than ever. A president intent on distorting history can be combatted by remembering it as it actually happened, rather than how it's reimagined.

I'm no longer an educator, but I still burst with pride at my eighth and tenth graders recognizing why history matters. It's time for the White House to do the same.