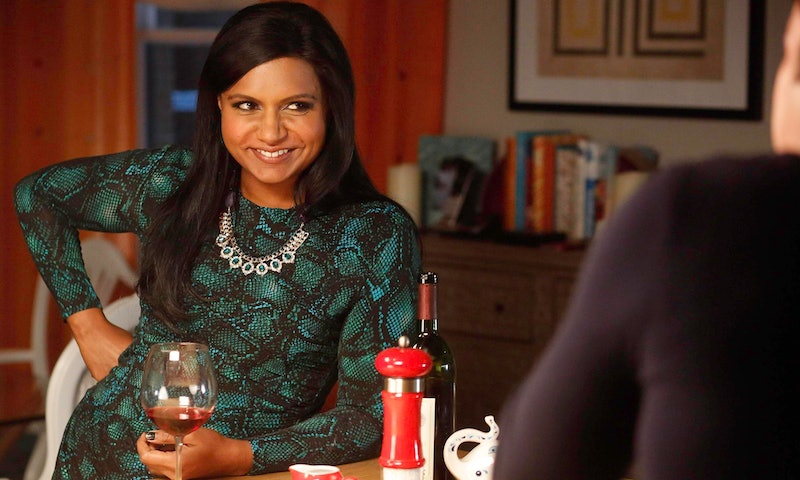 If you’re anything like me, you love TV, and you also love fashion. But more importantly, you love watching TV with fashionable characters, and you shamelessly covet all their awesome clothes and accessories. Personally, I've been falling in love with fictional character’s wardrobes since I was a little girl, starting with the Disney princesses. Ariel’s poufy-shouldered, '80s beast of a wedding dress; Belle’s flowing, golden, ball gown; and Jasmine’s turquoise, midriff-bearing uniform all gave me heart eyes. In fact, I loved Jasmine’s signature outfit so much as a kid, my mom actually bought me Jasmine inspired pajamas to wear around our house. I’d still wear them if I could. (I know I'm not alone on that one.)

For lots of us, fashion is a huge part of what makes a show, movie, or play so watchable. (That’s why there’s a whole profession and numerous awards dedicated to costume design.) Obviously, writing and acting are what really make or break a show, but I can usually gage how much I’m going to love a TV show by how many of the actor’s outfits I wish I could steal.

Of course, I would never actually steal anyone’s clothing ... (except maybe my sisters'). But in a world free of consequences, I would most love to raid the following 17 fictional TV character’s closets.

Okay, so stealing from a cop, even a fictional one who helps to cover up her brother’s many murders on Dexter, is problematic. But I still wish I could at least take her outfits out for a test drive. Because no one combines feminine and tomboy, or comfortable and professional like detective Deb Morgan.

Again, I wouldn't ever try stealing anything from a cop. Except maybe that sexy one-piece bathing suit Beckett rocks on her Hampton's getaway with Castle. But, damn I love her clothes on Castle. So many blazers, so much cashmere, and she’s always in perfectly tailored slacks. She can keep the heels though. There’s no way I’d be chasing bad guys all over New York City in the crazy high heels she wears. Yikes!

When I watch Downton Abbey, I momentarily forget about how infuriatingly limited women’s rights were in the 1920s and focus on how gorgeous the fashion trends were instead. All those hats and gloves and long, sleeveless gowns? I would definitely risk getting escorted from the Crawley grounds if there was even the slightest chance I might get away with a string of pearls from Lady Mary’s bureau.

Sometimes I can’t even handle watching Scandal because of wardrobe envy. Seriously, I want EVERYTHING Olivia Pope wears. That black and white lacy dress she wears to the president's birthday party in Season 2 is so stunning, it kind of makes me want to cry. Although, if I’m being honest, I don’t think I could keep all those stunning white pantsuits clean. I eat like a hungry Beagle.

Oh, Queen B. She had the rage of the incredible Hulk combined with the vindictiveness of a Disney witch, but the ever so classy style of Audrey Hepburn. If I could even convince her to give me her reject pieces, that would be enough.

When she wasn't in her Merlot’s uniform, Sookie really knew how to rock the whole Southern Belle fashion thing. All those pretty, cleavage-displaying, vampire-bait dresses slay me — especially that red and white one she wears to her Fangtasia debut. So, yeah, if I could get past all her supernatural buddies, I’d definitely take a shopping tour of her awesome closet.

Okay, so pretty much all of Gloria’s outfits would make me look and feel like a 12-year-old boy by comparison. But I still can’t watch an episode of Modern Family without coveting her silky blouses and bright colored dresses. WANT.

No one makes minimalist fashion sexier than CeCe Parekh does on New Girl. Of course, with her beautiful body and caramel skin she’d probably make a hospital gown look sexy, but regardless, I want her clothes. I want the green dress she's wearing at Pika, (the spiffy restaurant where she punches Nick in the junk and learns of Schmidt's infidelity) I want the kimono she wears constantly in her apartment, and I want every blazer she's ever worn anywhere.

If I could sneak into her fictional Los Angeles apartment and manage to get past all her absolutely insane, fictional, model roommates, I’d leave with as many solid-colored, staple tank tops and jumpsuits as I could carry. But I’d leave the bras. Because chances are, both of my boobs could fit into just one of her cups and there’d probably still be some room left.

Although I loved seeing all the stunning outfits Gossip Girl’s upper east siders donned, Vanessa Abrams’ hipster-y, boho chic, fashion sense was probably my favorite. Her individuality put the whole Constance crew to shame. Of all the Gossip Girl closets, even Blair’s, I think I’d want to raid Vanessa’s the most.

Not only is Phoebe my favorite friend — her hippy style still manages to be super fresh over ten years after Friends ended. She looks like a sexy earth goddess in every single episode AND she’s not afraid to rock overalls. So, yeah, I would love to raid her fictional closet.

I've never seen more pretty dresses and Peter Pan collars on anyone than I've seen on Miss Day. And those Chuck Taylors covered in baby farm animals that she rocks so hard in Season 2? Forget about it. If we were friends, I’d end up jacking a different quirky article of clothing every time I hung out at her ridiculously cozy, well-lit, Los Angeles loft.

If you haven’t noticed by now, I adore career wear, and Lorelei Gilmore did career wear right. If I could permanently borrow every single outfit she ever wore to the Independence Inn or the Dragonfly Inn, (starting with that black and red dress she had on when she met Christiane Amanpour) I would. And I'd have to take all the outfits she ever wore to dinner with Richard and Emily too.

She didn't rock a career in fashion for nothing. Rachel Green had some serious style. Even her lounge wear was cute AF. Those red and black flannel pajama bottoms and baseball tees she was always sporting around her and Monica's gorgeous, rent-controlled apartment would be the first items I'd snag. And I’d definitely take all of her “this is so last season” Ralph Lauren clothes off her hands too. But, obviously I’d have to leave her “Frankie Says Relax” T-shirt untouched.

Recently, I've realized that Carrie was kind of a self-absorbed jerk. But I think we can all agree her clothes were crazy in the best way. That tutu dress? Her many, uniquely beautiful, and absurdly expensive shoes? I’d buy her endless cosmos if it meant I’d get the chance to raid her designer-filled closet.

I’m kind of obsessed with blazers. I don’t just wear them with slacks. I’ll rock them with jeans, dresses, high-waisted shorts, crop tops, rompers, hell — I’d probably sleep in them if they had just a tad more give. So, binge watching Parks and Rec was a special kind of hilarious torture for me. Given the opportunity, I’d probably steal all of Leslie’s blazers while she was off saving Pawnee. Of course, knowing her, she’d end up giving them to me instead.

There are a lot of reasons I heart The Mindy Project. It’s hilarious, it’s smart, and as a healthcare professional, I enjoy a good medical-themed show that isn’t all about death and drama. But, more than anything, I watch the show for Mindy’s amazing fashion game. Her black and white Sunday church ensemble from Casey's church service in Season 1 may be a little bold, but I'd definitely grab it. None of her outfits are boring, and I want all of them.

So many crop tops, Converse sneakers, and high waisted everything. If I could, I would definitely distract this dope chick with a fat joint and then proceed to try on and/or leave with as many of her clothes as possible — Including her fruit loop leggings from Season 2. Of course, knowing Ilana, she either wouldn't care or wouldn't remember anything about it.

More like this
Dan Levy Gave Loungewear New Meaning In His Hilarious IG Runway Show
By Brad Witter
“The Door Is Always Open” For Another 'Breaking Bad' Spin-Off, Says AMC Boss
By El Hunt
Who Is Liam Neeson's Character In The Obi-Wan Kenobi Finale?
By Kadin Burnett
Viktor Hargreeves’ Coming Out Scenes Are The Sweetest Part Of Umbrella Academy Season 3
By Gretchen Smail
Get Even More From Bustle — Sign Up For The Newsletter