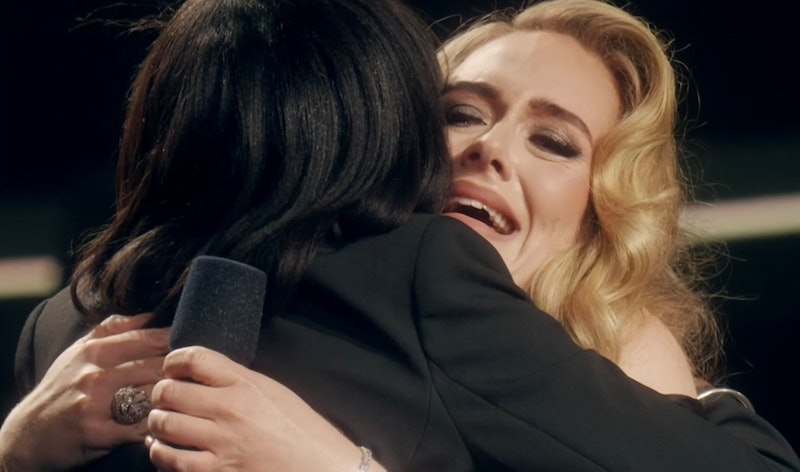 Adele is in full album promo mode, doing everything she can to ensure her latest release 30 opens with the biggest sales week possible. Her current campaign includes a handful of TV specials in different countries, with her hometown’s London Palladium event standing out as a particularly special evening filled with songs, laughs, and one reunion that brought the superstar to tears.

During ITV’s concert special An Audience With Adele, the 15-time Grammy winner performed new music, talked about the meaning behind the songs, and fielded questions from the audience. Actor and screenwriter Emma Thompson, one of the many celebrities in attendance, asked Adele if there was someone from her past who “supported you, inspired you or protected you from the trials and tribulations of life?” Adele immediately singled out her former teacher Ms. McDonald, who taught her English at Chestnut Grove School in Balham, South London, England. “She really made us care and we knew that she cared about us,” Adele replied. The “Easy On Me” chart-topper also added that Ms. McDonald was “so relatable and likable that I really looked forward to my English lessons.” The singer-songwriter then described her former teacher as “so bloody cool.”

Thompson responded to Adele, saying “it’s odd, actually, funny enough…” and trailed off, letting the audience cheer before Adele caught on to what was happening. She immediately began scanning the room, at which point McDonald stood up and walked toward the stage to thunderous applause. By the time she arrived onstage, Adele was in tears.

The pair hugged after two decades apart, and McDonald told Adele that she was “so proud” of her. After Adele admitted she had no idea her one-time teacher was going to be in attendance that night, McDonald responded, “That’s okay. It was supposed to be a surprise.” Adele couldn’t stop crying as McDonald thanked the global superstar for remembering her, to which Adele responded, “You really did change my life.”

The entire interaction lasted about a minute or so, at which point they hugged again and McDonald stepped off stage as Adele disappeared to get her makeup fixed after the surprise cry. While she removed herself, she invited comedian Alan Carr to come up on stage and entertain the audience. The band began playing the music to “Make You Feel My Love,” and Carr went for it. From the first note, the crowd was in stitches, as his rendition wasn’t quite as good as Adele’s.

The heartwarming moment was shared on social media by ITV, the network behind the special in the U.K., and it went viral in no time. An Audience With Adele follows her American concert special Adele One Night Only, which aired on CBS on Nov. 14. That primetime show also featured many celebrities in attendance that Adele handpicked to be there, and instead of a reunion with a teacher from her past, Adele helped a man propose to his longtime girlfriend.

More like this
What Is Mary J. Blige’s Net Worth? The 9-Time Grammy Winner Is Doing “Just Fine”
By Hugh McIntyre
Pedro Pascal Barely Got Through The "Lisa From Temecula" 'SNL' Sketch
By Stephanie Topacio Long
Melanie Lynskey Plays A “Ruthless Leader” In 'The Last Of Us'
By Brad Witter
Michael B. Jordan Tackled His "Public Breakup" With Lori Harvey On 'SNL'
By Brad Witter
Get Even More From Bustle — Sign Up For The Newsletter
From hair trends to relationship advice, our daily newsletter has everything you need to sound like a person who’s on TikTok, even if you aren’t.