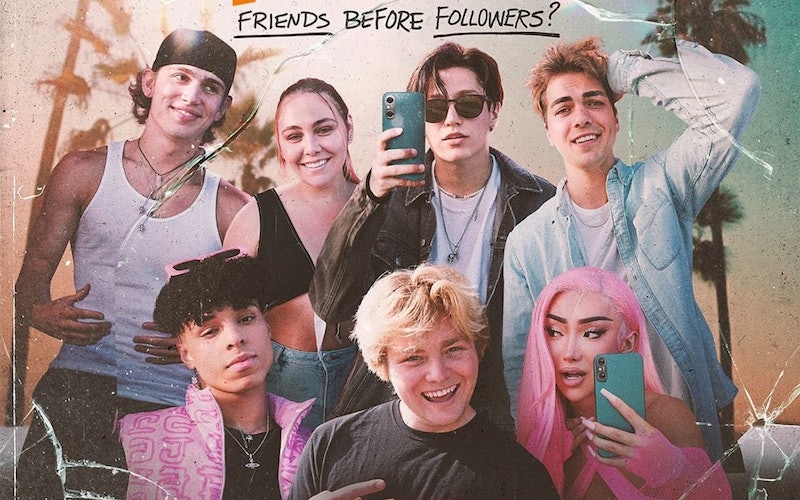 Living in a multi-million dollar mansion with your closest friends may sound like a dream, but for Hype House’s resident TikTok influencers, it’s not all pleasure — it’s business. In Netflix’s new reality series, aptly titled Hype House, viewers will get an inside look at the collective, its members, and how everything functions, for better or worse. Hype House premieres Jan. 7, 2022, so here’s a Hype House primer that will come in handy as you binge Netflix’s latest guilty pleasure.

“To the people saying they’re going to hate-watch the show, I 100% indulge you to,” Hype House cast member Alex Waren, who boasts 14.7 million followers on TikTok, told Bustle when Netflix first announced the series in April. “We put our lives these last few months into this show for you to judge, critique, and fall in love with our personalities. I’m not expecting everyone to love it, but I am expecting everyone to have fun watching.”

The collab house, which serves as a headquarters for some of TikTok’s biggest stars, is certainly not the first of its kind. Founded by eboy-turned-musician Chase Hudson (aka LilHuddy) and YouTube star Thomas Petrou, Hype House emerged in December 2019 after many YouTube collectives, such as Jake Paul’s Team 10 and David Dobrik’s Vlog Squad, demonstrated how successful content could become if popular social media users lived under the same roof.

But TikTok houses quickly proved to be very different from the YouTube houses that came before them. The short-form video-sharing app, which launched in September 2016, requires creators to think quick on their feet and provide new content on-demand in order to stay relevant.

“Imagine a fraternity filled with people who have millions of followers — and dollars — and like a ring light.”

For Hype House, which included 21 members at one time, that meant devoting their entire schedule to creating content with their housemates. “If someone slips up constantly, they’ll not be a part of this team anymore,” Petrou told The New York Times. “You can’t come and stay with us for a week and not make any videos, it’s not going to work. This whole house is designed for productivity. If you want to party, there’s hundreds of houses that throw parties in L.A. every weekend. We don’t want to be that. It’s not in line with anyone in this house’s brand.”

Due in part to the house’s strict rules, many of its original members have moved on. Among them are sisters Charli and Dixie D’Amelio, who now have a nearly 200 million followers, combined, on TikTok. Addison Rae was also a member before rubbing elbows with Kourtney Kardashian, starring in She’s All That, and launching a music career.

READ NEXT: The Millennial’s Guide To Addison Rae

Only a few of the original 2019 members remain in Hype House. Here’s your primer on all things Hype House, including its new members, the Netflix show’s cast, and their controversies.

What Is The Hype House?

“Imagine a fraternity filled with people who have millions of followers — and dollars — and like a ring light,” beauty influencer Nikita Dragun says in Netflix’s Hype House series trailer. Yup, Hype House is the name of a TikTok collective comprised of teenage and early 20-something influencers who create content together, and make lots of money doing so, at a mansion in Los Angeles.

Thomas Petrou and Chase Hudson founded the social media incubator with fellow influencers Daisy Keech and Alex Warren in late 2019, and although Keech has since backed out and the group has undergone many changes, the new Netflix series is proof that Hype House is committed to growing its social media footprint while also trying to reach new non-TikTok audiences.

With or without Netflix’s cameras, the group creates content non-stop. “There’s probably 100 TikToks made here per day. At minimum,” Petrou told The New York Times.

Where Is The Hype House Mansion?

The new Netflix series mainly takes place at Hype House’s newest and perhaps most elaborate mansion yet. “We have ten 20-year-olds living in a $5 million house together, filming content all day,” Petrou says in the series trailer. “It just doesn’t sound real.” But it is. This Hype House is located just outside of Los Angeles in Santa Rosa Valley, and it reportedly sits on 20 acres of land. It has a home theater, a large pool with a terrace-style hot tub, and a ton of natural light that would put every social media influencer’s ring light to shame.

Previously, the collective operated elsewhere, having relocated several times. Seven months after moving into their first house — a Spanish-style mansion on top of a hill with a bathroom the size of a one-bedroom apartment — the group moved to a new place in Santa Monica. That $14 million contemporary mansion was previously home to the Clout Gang, a now-defunct YouTube collective that included influencers FaZe Banks, Alissa Violet, and Rice Gum.

Who’s In Hype House & On The Show?

Hype House has changed significantly since its 2019 debut. The group first introduced itself on Instagram with a photoshoot of the original members coordinating in blue jeans and white T-shirts. Initially, the collective included Thomas Petrou, Chase Hudson, Daisy Keech, Alex Warren, Charli and Dixie D’Amelio, Addison Rae, Kouvr Annon, Avani Gregg, Ryland Storms, Calvin Goldby, Connor Yates, Patrick Huston, and Nick Austin. Charli was the most-followed in the house at the time and her former relationship with Hudson took up much of the spotlight.

“It feels great to be on a Netflix show,” Warren told Bustle last year. “It’s been my dream since I was a kid to do something on a huge scale like Netflix. It feels surreal, and to be honest, I can’t believe this is real life. A lot of people probably have different opinions on what the show is going to be about. I think this show is gonna surprise a lot of people, with things you may never seen of your favorite creator, or maybe the creator you absolutely hate.”

Although Hype House has been a revolving door since it began, Petrou, who was formerly a member of Team 10, has always maintained his role as house leader. He manages everyone’s schedules, makes sure they’re pushing out content regularly, and resolves any conflict that may disrupt daily workflow. Hudson, for his part, has acted as the collective’s unofficial recruiter. “[You have to] have a lot of energy and personality and honestly a little weird,” Hudson told The New York Times. “The weird people get the furthest on the internet.” Warren agreed, telling the paper that “you either have to be talented at something, or a weird funny mix, or extremely good looking. If you have all three, you’re a TikTok god.”

Several of Hype House’s aforementioned original creators have jumped ship. After months of drama (more on that later), Keech, a fitness influencer and one of Hype House’s co-founders, was the first to leave in March 2020. She formed a collective of her own called clubhouse.

The following month, after Charli D’Amelio and Chase Hudson’s highly publicized split, she and her sister Dixie announced that they would also be leaving. A representative for the D’Amelios told The Hollywood Reporter that they “stepped away” from Hype House when it “started to become more of a business.” Certainly, the sisters have no regrets. In November 2020, Charli became the first person to earn 100 million followers on TikTok. She was also nominated for Social Star at the People’s Choice Awards and released a book called Essentially Charli: The Ultimate Guide to Keeping It Real. Dixie, for her part, has a budding music career, and the family’s series The D’Amelio Show premiered on Netflix in September 2021.

At the time of the D’Amelios’ departure, Addison Rae’s status in the Hype House was unclear. Hype House was still posting photos of her, but Addison seemed checked out. She no longer made videos on the group’s account, and she stopped wearing Hype House merchandise. Addison never officially addressed her departure, but in May 2020, her now ex-boyfriend Bryce Hall basically confirmed her exit: “The Hype House? Charli and Dixie left and Addison doesn’t really associate with the Hype House, so they really kind of just — I don’t know what they’re doing exactly.”

Although the Hype House lost a lot of its star power when those four popular women left, they weren’t the only ones who split. Brothers Tony and Ondreaz Lopez also left the Hype House in September 2020, after Petrou announced in a YouTube video that they were moving into their own home. “This is my time to shine,” Ondreaz said. “This is how it’s going to go down. I am just getting my own crib. Alright, because I literally live in a f*cking office space, right? That’s what this is. I got tired of it, and I want my own damn place.”

Like most influencers, the members of Hype House are not immune to controversy. As Nikita Dragun says in the first episode of the show, “One wrong move can make everything crumble in a second.” Although not an official member of the collective, Dragun has faced her fair share of controversies, specifically when it comes to accusations of blackfishing and cultural appropriation. Most recently, in October 2020, the trans influencer made waves when she tweeted, “what race is nikita gonna be today?” as a response to criticism of how her skin has appeared darker in ad campaigns. Many followers were not happy with her flippant reaction to criticism, with makeup artist Nyma Tang responding, “this sh*t is not funny.”

The Hype House, as a whole, came under fire during the peak of the COVID-19 pandemic, when they were criticized for throwing a birthday party for member Larri Merritt in July 2020, which had nearly 100 attendees and ignored public safety guidelines like social distancing and mask-wearing. High-profile attendees like Dragun, Rae, and the D’Amelio sisters were especially criticized for flouting guidelines as the number of cases were climbing to record highs in California. In addition, many of the attendees kept silent on whether they contracted coronavirus.

The collective has been hit with allegations of sexual harassment. Former member Tony Lopez was sued for alleged sexual battery and emotional distress in January 2021. The lawsuit was filed on behalf of two teenage girls identified as H.L. Doe and C.H. Doe, who claimed Lopez spoke with them via text and Snapchat and allegedly coerced them into “unlawful sexual acts” knowing that H.L. Doe was underage. The suit also named Petrou and Hudson for negligence. Lopez denied the accusations to BuzzFeed News: “I never sent nudes to these women and didn’t ask them to send me pictures either. And, I certainly wouldn’t have sex with someone who told me they were underage.”

Followers have also chastised the Hype House for relationship drama. After their breakup in April 2020, Charli D’Amelio called out Hudson for reportedly cheating on her with fellow TikToker Nessa Barrett, who was dating influencer Josh Richards at the time. When Hudson infamously unloaded a lot of TikTok drama in a since-deleted tweet, admitting that he kissed Barrett, D’Amelio fired back and accused him of not taking responsibility. “Stop deflecting your actions onto others because you can’t take responsibility, Chase,” she wrote. “Want me to talk about how you treated me throughout our relationship or do you just want to continue to play the victim?”

Even more drama is sure to unfold on the Netflix series Hype House starting Jan. 7.

More like this
Brittany Snow Files For Divorce From Tyler Stanaland After 'Selling The OC' Drama
By Grace Wehniainen and Radhika Menon
'RHOSLC' Star Jen Shah Refuses To Do A Post-Sentencing Interview With Andy Cohen
By Brad Witter and Jake Viswanath
Everything To Know About 'The Real Housewives Ultimate Girls Trip' Season 4
By Jake Viswanath
Andy Cohen Apologized To Larsa Pippen After A 'RHOM' Season 5 Reunion Dust-Up
By Brad Witter
Get Even More From Bustle — Sign Up For The Newsletter
From hair trends to relationship advice, our daily newsletter has everything you need to sound like a person who’s on TikTok, even if you aren’t.