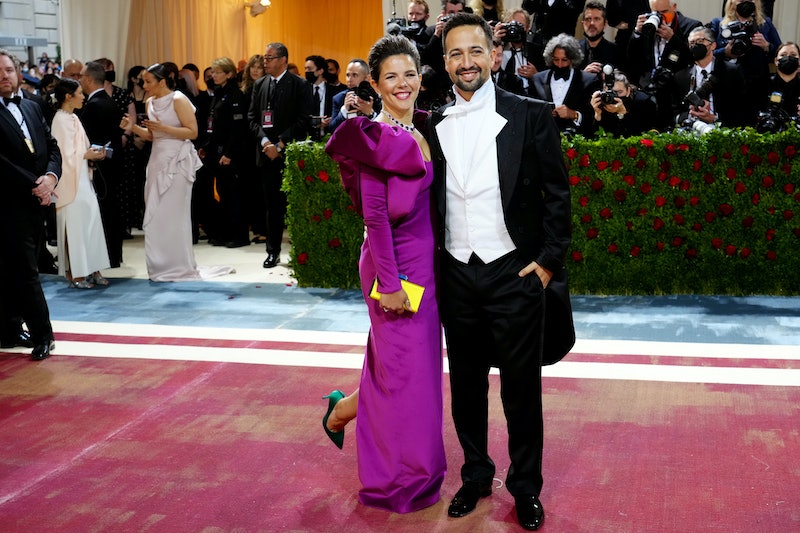 The 2022 Met Gala theme will continue last year’s In America: An Anthology of Fashion with a particularly intriguing dress code: “Guilded Glamour.” Guests have been asked to “embody the grandeur — and perhaps the dichotomy — of Gilded Age New York.” And who loves New York more than Lin-Manuel Miranda? From In the Heights to Hamilton, the renowned playwright and composer has been writing musical love letters to his native city for years — and now, he gets to represent the Big Apple on a new level. Miranda will be one of the Met Gala co-chairs, hosting alongside Regina King, Blake Lively, and Ryan Reynolds.

Sure to be cheering on Miranda’s hosting gig is wife Vanessa Nadal, with whom he shares one of the sweetest showbiz love stories ever. Long before he was on the brink of an EGOT — and she an accomplished engineer, attorney, and professor — the power couple were just classmates.

Ahead, here are some of the key moments on Miranda and Nadal’s relationship timeline, which really is the stuff of what musicals are made of.

To celebrate their 2010 wedding (more on that later), The New York Times charted the story of Miranda and Nadal’s romance. The pair attended New York’s Hunter College High School together, where Miranda was known for carrying a boombox around campus. He was a senior while Nadal was a sophomore, but he crushed from afar. “She was gorgeous and I’m famously bad at talking to women I find attractive,” Miranda said. “I have a total lack of game.” As Miranda revealed on Twitter in 2018, his future wife had even written about him in their school newspaper once upon a time.

Miranda and Nadal didn’t connect until after college (he’d gone to Wesleyan, and she to MIT). During the early days of Facebook, Miranda reached out to Nadal and invited her to a show for Freestyle Love Supreme, a hip-hop improv group. They didn’t talk that first evening. “If she’d just paid attention, she would have known from my darting, furtive glances,” Miranda told the NYT. But they connected at a later show. “When he came onstage, I thought, I really like this guy,” Nadal said. “He was up there free-styling and weaving rhymes together. It’s pretty impressive. He’s really, really smart.” After that second show, they went to Miranda’s house and played Grand Theft Auto.

Months Later: The First “I Love You” (Sort Of)

Miranda and Nadal soon exchanged keys, and as they told NYT, Nadal would get off work and find her beau composing in her apartment. “I look like a crazy person on the subway when I’m writing,” he said. “I sing and run around. I pace a lot. I need to move. But I wasn’t at all self-conscious around her.” They exchanged love confessions, too. At a party, Nadal said, “we met up for a kiss and he said, ‘You love me.’ I was like, ‘How presumptuous!’ I was a little angry but I couldn’t deny it.”

The borrowed apartment paid off. While accepting his first-ever Tony Award — Best Original Score for In the Heights — Miranda rapped a sweet shoutout for Nadal: “Vanessa, who still leaves me breathless, Thanks for loving me when I was broke and making breakfast.”

The couple’s New York nuptials included Broadway singers — and Miranda’s surprise performance of “To Life,” including some help from Nadal’s family and friends.

In 2014 and 2018, Miranda and Nadal welcomed sons Sebastian and Francisco, respectively — both announced on Twitter via playwright lingo, of course.

In 2021, Miranda made his feature directorial debut with tick, tick... BOOM! — and even though it’s based on Jonathan Larson’s semi-autobiographical musical, it also has a lot in common with Miranda’s early creative career.

On Twitter, Nadal told Miranda that an image of Andrew Garfield lying down with his keyboard “encapsulates when I met you. (I mean, is it actually the same room?) You’ve worked so hard. And you did it. Congratulations, Director. I love you.”

As they arrived to the 2022 Oscars, Nadal tested positive for COVID, with Miranda (who was on the brink of an EGOT) eventually skipping out on attending the Academy Awards out of caution.

Miranda was involved with two of the night’s nominated films: tick, tick... BOOM! and Encanto.

May 2022: They Attend Their First Met Gala

Miranda co-chaired the 2022 Met Gala, and Nadal was there to support him.

More like this
Harry Styles Addresses The Theory That His New Song "Daylight" Is About Taylor Swift
By Jake Viswanath
Harry Styles Opened Up About Olivia Wilde With A Rare Comment About "Trust"
By Sophie McEvoy
Taylor Swift Knew Hayley Kiyoko & Becca Tilley Were Dating 4 Years Ago
By Grace Wehniainen
Britney Spears Met The Weeknd & Sam Levinson, So She May Actually Be On 'The Idol'
By Jake Viswanath
Get Even More From Bustle — Sign Up For The Newsletter