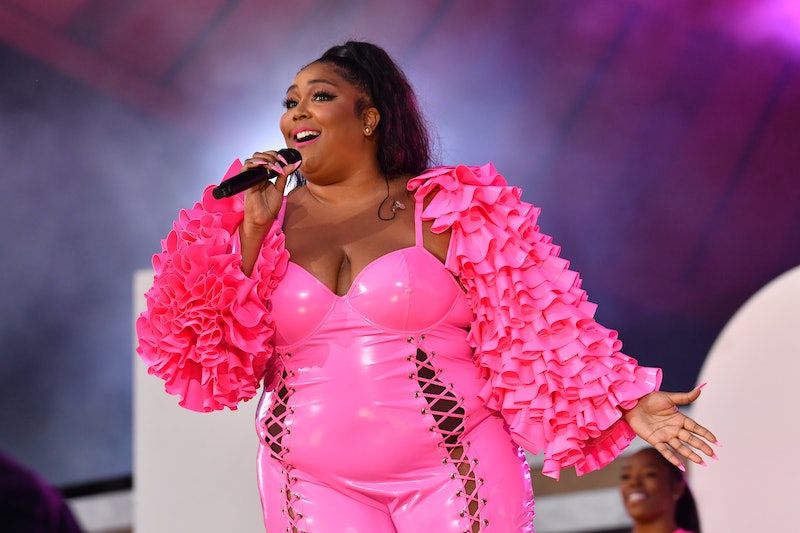 Before breaking out with her hit single “Truth Hurts” in 2019, Lizzo spent many years struggling to make it as a musician. She dropped out of college at 20, abandoning her dream of becoming a professional flutist and at one point living in her car. But she persisted, and within just a few years, Lizzo has gone from a relatively unknown artist to a three-time Grammy winner and a multi-millionaire. In addition to her work in music, Lizzo has branched out, and now she’s a TV producer and even a fashion designer and business owner.

So just how much is she worth, and where does all that money come from? Let’s break it down.

What Is Lizzo’s Net Worth?

Lizzo is currently worth an estimated $12 million, according to Celebrity Net Worth. That sum may seem small considering Lizzo’s mammoth success, but she only began making big money within the last few years. Now that she’s a star, her earning potential has skyrocketed, and that figure is sure to climb as she releases more music and takes on additional business ventures.

Lizzo unsurprisingly earns most of her money from her music. Two of her albums have made it on the Billboard 200 chart, with her breakout record Cuz I Love You reaching the Top 10 (it peaked at No. 4). On the Hot 100 ranking, which focuses only on songs, she has placed four tracks, with all but one rising into the Top 10. So far, her sole No. 1 single is “Truth Hurts.” “Good As Hell” (which sometimes features Ariana Grande) and “Rumors” with Cardi B have also both made it into the Top 10.

In total, Lizzo has moved one million equivalent albums in the U.S. Only Cuz I Love You has been certified platinum. The singer has fared much better when it comes to singles, as the RIAA has certified 16.5 million songs moved in the U.S. alone.

Lizzo is also a credited songwriter on everything she’s released, which means she gets paid small royalties when fans stream her music or when radios play her songs. With billions of streams on sites like Spotify, Apple Music, and others, all those fractions of a cent add up quickly.

Lizzo is known as an engaging and energetic performer, and she’s been playing bigger and bigger venues as her career has progressed. After headlining her Good as Hell Tour in 2017, she spent 2018 opening for Haim and Florence + the Machine. She likely didn’t make too much money from these ventures, as openers often don’t bring home a ton of cash and the shows are usually seen as promotional in nature.

After releasing Cuz I Love You in 2019, Lizzo embarked on her biggest tour yet: the appropriately titled Cuz I Love You Too Tour. Exact figures are difficult to pin down for the run of shows, which took her to more than 10 countries before the coronavirus pandemic ended it abruptly in 2020. Touring data suggests it may have brought in nearly $13 million, though that figure isn’t 100% verified (it does, however, suggest that the tour was successful).

Like many musicians, Lizzo also regularly performs at private events and concerts hosted by brands. How much she makes from these events is not public, but the number could be in the five if not six digit range.

Lizzo has partnered with several major companies on advertising deals. In just the past few years, she’s earned paydays from brands like Dove, Logitech, and Quay, with most of the campaigns she’s been a part of pushing a positive message that aligns with who she is as a person. The exact amount Lizzo has made from these deals is not public.

Lizzo has made numerous TV appearances as herself, including on RuPaul’s Drag Race and Saturday Night Live. So far, she’s been in just two films that required her to act, including the animated children’s picture UglyDolls and the critically acclaimed 2019 crime dramedy Hustlers. Because she was just beginning to reach the mainstream audience when those projects were released, Lizzo probably didn’t make as much from these ventures as she would now, but they did get her started in the film and TV fields.

In mid-2020, Lizzo also signed a first-look deal with Amazon, which means she has a direct line to pitch the streaming giant as she creates ideas for TV shows. Financial details connected to the deal weren’t shared publicly, but with a conglomerate like Amazon footing the bill, it surely wasn’t cheap. The first series to emerge from the partnership is an unscripted reality program called Watch Out for the Big Grrrls, which premieres on March 24, 2022.

On Mar. 30, Lizzo took to Twitter to announce her first foray into the fashion world and a new business she’d founded. Yitty is a shapewear line fronted by and created by the singer, and according to her initial reveal, it was five years in the making. The company is backed by Fabletics, which was founded by actor Kate Hudson and which counts revenues in the hundreds of millions of dollars.

Yitty will apparently feature products like bras, leggings and much more, with some items working as either undergarments or clothing that can be worn on the outside. What Lizzo is making from the venture isn’t clear, and nothing has gone on sale yet, but soon fans of the musician will be able to snap up everything in the first lines.

In a statement shared with the press announcing Yitty, Lizzo explained a bit about the company’s radical new way of thinking about clothing, saying, "Instead of thinking about size in this linear way, we're thinking about it on a spectrum where everyone is included. Everyone's size is just their size. It's not high, it's not low. It's not big, it's not small. It's just your size.”