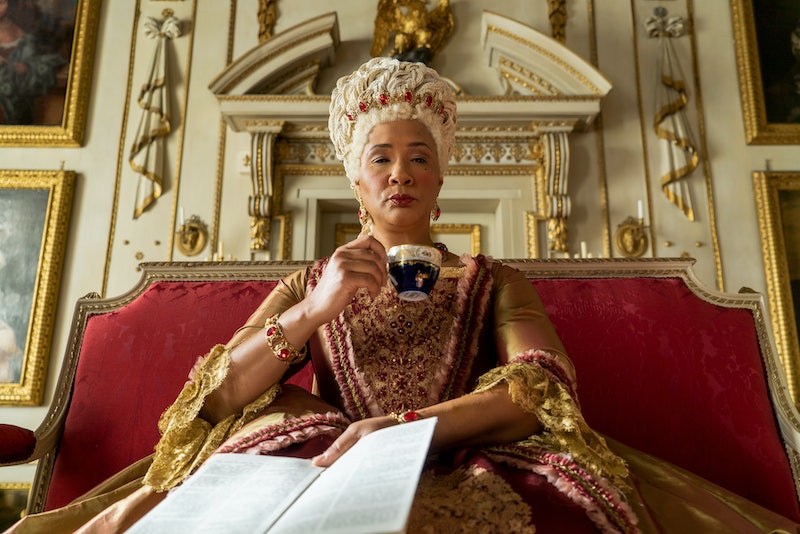 Somewhere out there, Lady Whistledown is clutching her pearls. The 2021 Golden Globe nominations are here, and Netflix's Bridgerton wasn't nominated in any of the TV categories. How gauche. These snubs arrive just after Netflix announced the hit Regency-era drama had been watched by a record 82 million viewers, making it one of the biggest shows in the streaming service's history. Naturally, Bridgerton was renewed for a second season, as well.

But the Shonda Rhimes-produced show, based on Julia Quinn's popular romance novels, failed to register with the Hollywood Foreign Press Association (HFPA). There were no nods for Bridgerton, nor its various breakout stars, including Regé-Jean Page as Simon, Phoebe Dynevor as Daphne, Nicola Coughlan as Penelope, or Golda Rosheuvel as Queen Charlotte.

Alas, the corseted-cast won't be showered with awards when the Globes air on Feb. 28, 2021. That didn't stop the voting body from nominating other royalty-adjacent series (see: The Crown's six nominations and The Great's three nods), nor did it prevent recognition for other new shows such as The Flight Attendant and Emily in Paris (two nominations each). Just as Whistledown airs her grievances via gossip-filled columns, many Bridgerton fans voiced their disappointment over the snubs on Twitter.

In defense of the HFPA (deep breath), Bridgerton premiered on Dec. 25, which is at the tail-end of the Globes eligibility window. Shows could secure nominations if they premiered from Jan. 1, 2020, through Dec. 31, 2020, according to The Hollywood Reporter. Still, Bridgerton remained atop Netflix's most-watched titles for weeks after its debut, giving the HFPA members ample time to binge-watch. However, as Lady Whistledown warns in the series, “The brighter a lady shines, the faster she may burn,"—a theory that could apply to the show's Globes odds.

Another factor may be the Globes' lackluster history with diversity. This year alone, the HFPA shut out several projects centered on people of color, including Michaela Coel's I May Destroy You, Spike Lee’s Da 5 Bloods, and the acting ensemble of Lovecraft Country, among others. Instead, a few of the most-nominated films and TV shows included Mank, Promising Young Woman, Schitt's Creek, and the aforementioned The Crown. Meanwhile, Bridgerton infused a breath of fresh air into the period drama space, casting actors of all races in early 1800s London.

In light of the snubs, it appears that the show's cast and creators are making haste on Bridgerton Season 2. It will likely draw inspiration from Quinn's The Viscount Who Loved Me, which centers on Anthony's (Jonathan Bailey) journey to love. The second season may also make way for future installments, according to Bridgerton creator Chris Van Dusen. "This being a family of eight children and there being eight books, I would love to be able to focus and really tell stories and love stories for all the Bridgerton siblings. For each character, for sure," he told Collider. When asked directly about the possibility of eight seasons, Van Dusen offered, "I would love that. In success, I would love that."

More like this
Twitter Is Burning As Phoebe Dynevor Reveals Daphne’s 'Bridgerton' Exit
By Sophie McEvoy
'The Queen’s Gambit' Season 2 Tweet Wasn’t From Anya Taylor-Joy
By Mary Kate McGrath, Jack Irvin and Grace Wehniainen
Ashton Kutcher Wants Danny Masterson “To Be Found Innocent” In Rape Retrial
By Jake Viswanath
'The Crown' Season 6 Has Suspended Filming "Out Of Respect" For The Queen's Death
By Bustle Staff
Get Even More From Bustle — Sign Up For The Newsletter
From hair trends to relationship advice, our daily newsletter has everything you need to sound like a person who’s on TikTok, even if you aren’t.